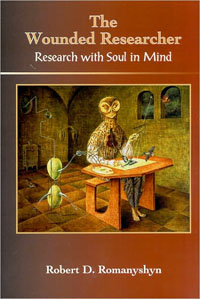 In a 2005 interview with Dolores E. Brien, Robert Romanyshyn said: “As a phenomenologist, I start with the notion that soul reveals and conceals itself in and through the landscapes of experience we build individually and collectively. A person says whom he or she is, for example, in the clothes that are worn, in the books that are read, in the ways in which the house is furnished and made into some kind of home.” He goes on to explain that “the same is true on a collective level… a fourteenth century Gothic church sets in stone the psychological spirit of the age in a way which is radically different from a Renaissance church.”

This phenomenologist is also a post-Jungian, that cabal of therapists and scholars whose work extends C.G. Jung’s psychology into everyday life, facing the Gods with the audacity to address them as symptoms of the psyche’s metabolism, and casting Jung’s insights into this century’s aporia. Romanyshyn’s vision is also philosophical, leading him to where words slip away from their referent. “Green!,” he exclaims, is “a word that is an insult to the richness that surrounds me.” However his is not a deconstructive critique, nor an anthropocentric one. He asserts, rather, that the production of meaning is like an alchemical process that raises one’s awareness to “an internal imperative that is more about the work than it is about me.”

A Core Faculty Member in Clinical Psychology and Depth Psychotherapy at Pacifica Graduate Institute, Romanyshyn has written a pedagogy with much larger applications in The Wounded Researcher. Anyone who reads more than a few pages of this book is by default someone interested in doing “re-search,” as Romanyshyn describes “the unfinished business in the soul of the work, the unsaid weight of history in the work that waits to be said.” Artists, for example, are familiar with the call to create a work “beyond reason,” a call from one’s soul, to contribute to the world something that has never existed before.

The Wounded Researcher is also a book of grieving, a word that made a place for itself in Romanyshyn’s vocabulary after the sudden death of his first wife, to whom he had been married for 25 years. In a dream he had a few days after her death, a longer version of which can be found in his 1999 book, The Soul in Grief: Love, Death, and Transformation, he is at a party at a friend’s house where he sees his wife flowing through a room of guests “as if not weighted down by gravity.” Awake, he writes, “This is her place, and in it I seem to have become invisible, as if I were the one who has died.” Gravity, gravitas, grieving, elegiac mourning, “a sweetly bitter quality that comes from yearning for something that, while never attained, is always with us.”

It is better not to do research methodologically, which Romanyshyn claims has been holding psychology, for one, hostage, but with a poetics; this “does not mean that research is poetry,” but that a researcher is attuned to “the gap between conscious and unconscious, which is bridged by the symbol as the expression of the transcendent function.” This gap, the mundus imaginalis, the imaginal region mapped by the French philosopher and scholar of Sufism and Iranian Shi’ism, Henri Corbin, is “intermediate between sense and intellect and that mediates between them.”

Meaning is born where we are unbalanced. Here the abyss opens, and “to descend into that abyss requires a different way of seeing and knowing.” An imaginal approach to research also includes “former ways of knowing,” such as alchemy, astrology, and I-Ching. It seems to me that the spirit of this work is more European than American, more life-affirming than wealth-gathering, more Eros than Logos; mysterious rather than pragmatic, it dissolves fundamentalism into a Cloud of Unknowing.

Some of the most lyrical moments in The Wounded Researcher are found in Romanyshyn’s generous quotations from and discussion of the problems his students had finding a path into their dissertations. For example, an Iranian student, Kiyanoosh Shamlu, wanted to explore the work of the 12th-century Iranian intellectual Sohrevardi, and how “an ancient Islamic tradition and the modern Western one of Jungian psychology converge and diverge in their understanding and treatment of imagination and its relation to the imaginal world.”

During the initial stages of his work, Kiyanoosh had a series of significant dreams. In the first, “he is in a very dark forest, where he is running away from an old man who is chasing him.” In the second, “he finds himself on the top of a mountain with a book that has no writing in it.” In the third, “he is riding in the sky on the back of an enormous bird while looking down on a green landscape that has no discernable figures or objects.” Kiyanoosh could make no sense of these dreams, until he came across them in Sohrevardi’s “descriptions of the soul’s spiritual journeys of descent from and return to the imaginal world.”

Kiyanoosh went on to explore “an unacknowledged metaphysics,” in which “the imaginal world is not so much an underworld as the epiphany of an other world, which. . . Jung himself was struggling to understand.” Romanyshyn goes on to say that Kiyannoosh’s experience indicates that dreams “may know more about the work than the conscious researcher does.” It is not so much that Romanyshyn opens new territory by suggesting this, but in the context of the book it becomes the long-nosed pliers in the toolbox of the researcher who has soul in mind.

This toolbox also includes elegiac writing, where “a researcher dwells among the ruins because he or she knows that it is in the ruins that the living spirit of the work waits to be remembered.” It is a style of writing that “resurrects the dead and transforms them, as well as our relationship to them.” Also discussed at length is what Romanyshyn calls “alchemical hermeneutics,” a process that “keeps stirring the work so that what would become coagulated dissolves.” There is also “creative repetition,” which is “like falling in love again with the work, coming under its spell, being claimed again by it. Creative repetition is a return to the romance of the beginning.”

Nowhere is the romance of the beginning more lovingly handled than in his discussion of the myth of Orpheus and Eurydice. Romanyshyn suggests that this myth “is the archetypal background for how research becomes psychological,” as it is “about this process of losing and finding, about this work of transformation in which the other becomes a psychological reality, a matter of soul.” The part of the myth that most intrigues him—and that has also cast its spell over many other writers, from Virgil and Ovid to Rainer Maria Rilke—is when Orpheus travels to Hades to retrieve his wife, Eurydice. There he is granted his wish, but only if he doesn’t look back (an echo between Greek and Hebrew mythologies). As in so much mythology, of course, he violates this proviso. “Orpheus had to look back, “ writes Romanyshyn, “because the underworld is Eurydice’s place, and being there, not only is she freed from being Orpheus’s possession, she is also freed into herself.”

In his poem, “Orpheus, Eurydice, Hermes,” Rilke dwells on this pivotal moment:

She was already root.

This calls to mind Denise Levertov’s poem, “A Tree Telling of Orpheus”:

Then as he sang
it was no longer sounds only that made the music:
he spoke, and as no tree listens I listened, and language
came into my roots
out of the earth,
into my bark
out of the air,
into the pores of my greenest shoots
gently as dew
and there was no word he sang but I knew its meaning.

When we love into our roots there is no turning back, though there can a turning away—as when, in Rilke’s poem, Eurydice’s guide, “Hermes says, ‘with sorrow in his voice: He has turned around—,’ Rilke says, ‘she could not understand, and softly answered / Who?’”

“Who! Just this one word,” Romanyshyn writes, “which the poet italicizes! We are meant to notice something here, some fundamental change not only in Eurydice but also between her and Orpheus.” In other words, this change in direction is possible only when one in the couple lets go, as in Romanyshyn’s dream of his departed wife, to whom he had become invisible. In that dream, if he had tried to speak to her, had said to her, “Don’t you remember me, your husband?” I think she would have replied, “Who?”

Adding the dimension of dreams, along with “metaphoric sensibility,” “creative repetition,” “alchemical hermeneutics,” and many other techniques that are valuable to the process of research in every discipline, this seminal book is also a primer for a deeper understanding of what it means to be human.