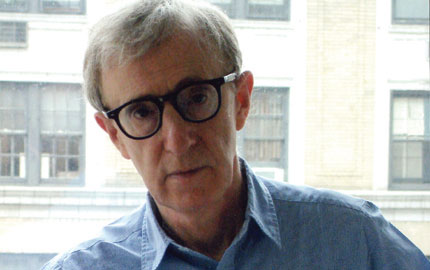 “. . . for a ‘casual’ I eat breakfast, go into my bedroom, read the Times, lie down on the bed and start writing. It’s wonderful.”

Wunderbar! Wonderful for him, wonderful for us, but if The New Yorker had published Jonathan Swift’s “A Modest Proposal,” would the editors have labeled it a “casual”? Is there any term more demeaning to writers, any term less accurate to describe the work of Mark Twain, James Thurber, Robert Benchley, S. J. Perelman, et al.? Of course, literate Americans (a gross of them) know that “dying is easy and comedy is hard,” and it is Woody Allen’s nature to be self-deprecating. Still, persons who never read a book will stand in line for hours to hear a comedian machine-gun one-liners, while the demand for humor writing is negligible. Few literary magazines ever publish humor, and major publishers will issue humor collections only if the author has a syndicated column (Dave Barry or Erma Brombeck), has a highly recognizable name (Woody Allen or Steve Martin), or possesses some highly incriminating negatives useful for blackmail. In addition, few contemporary college students have ever read the likes of S .J. Perelman or Robert Benchley—and even if they did, would they respond positively to a style of humor rapidly passing from the scene? As John Wain has written: “Fashion in humor changes with bewildering speed, and the world of the comic writer is as tough as the world of the circus strong-man. Once the day comes when he cannot lift that weight, he makes way for someone who can.”

For now, Woody Allen is one writer doing the heavy lifting of stuff we consider too light, too casual to honor with serious attention. Make no mistake about it, however: if Allen had never directed one movie, we would still recognize his considerable talents as a writer. How many readers remember that his classic short story “The Kugelmass Episode” was awarded the O. Henry Prize in 1978, beating out such writers as Mark Schorer, Harold Brodkey, and Alice Adams? No slouches they. Allen is an important literary humorist whose writings are worthy to stand beside those of Thurber, Twain, et al. Allen’s essays and stories, in fact, probably garner more laughs per printed inch than those of all his predecessors, because no one, not even Oscar Wilde, has created more funny one-liners:

“Not only is there no God, but try getting a plumber on weekends.”

“Bisexuality immediately doubles your chances for a date on Saturday night.”

“I’m not afraid of dying. I just don’t want to be there when it happens.”

“Eternal nothingness is O.K. if you’re dressed for it.”

In the long view, though, literary humor has very little to do with stringing one-liners together. How many one-liners did Jonathan Swift write? Or Mark Twain? No. Humor writing, as opposed to writing material for comedy monologues, has a different vision, and different rhythms. Standing up on stage and reading aloud some of Allen’s “casuals” such as “The Metterling Lists” (from Getting Even) or “To Err is Human—To Float Divine” (from Mere Anarchy) will not garner the same kinds of laughs as Allen’s classic stand-up routines. John Lahr, the noted theater critic who profiled Allen for The New Yorker in 1996, quoted the following insight of Allen’s on the difference between writing humor for the page and jokes for the stage: “When the contact is intimate between the mind and the emotions of the reader, you can just drop snowflakes. The most gossamer things work. But when you’re out there facing five hundred people, you’ve got to have a good joke line.”

Allen, unlike Swift, is for the most part neither a poet nor a political satirist. Politics remains remarkably unremarked upon in his work. And, unlike his recent films set in posh London, his written pieces are rarely even tinged with irony. Rather, he is dead on as a parodist, an absurdist, and a chronicler of modern angst distilled through a prism of non sequiturs. He disrupts logic and leaps over the time and space with Clark Kent bounds. Among his favorite humor writers are S.J. Perelman, Fran Lebowitz, and Robert Benchley, but there are a number of differences that set Woody Allen’s writings apart from them.

First, there is the matter of his mercurial style. When his second collection of humor pieces, Without Feathers, appeared, two critics opened their reviews with the same observation: “There is no such person as Woody Allen” (Arthur Cooper); “Woody Allen’s regret in life is that he’s not someone else” (David Brudnoy). If we agree with those gambits, then Zelig may be the most autobiographical of his movies. And indeed, Woody can turn up in any manner of styles. You want a Bergman movie, he can out-Bergman Bergman. You want a Fellini movie, no problem. In college, as critic and humorist Gerald Nachman points out, Allen would “amuse himself by writing English essays in Max Shulman’s rococo style.” There it is in a nutshell: Allen’s ability to mimic anyone.

Perhaps it would be more accurate to say that certain artists have many styles, many selves. When Shakespeare, for example, penned tragedies and comedies and romances, few audience members would have opined “there is no such person as Shakespeare” (only academics do that now, gaining tenure as they prove that everyone from Francis Bacon to Francis the Talking Mule wrote Hamlet and King Lear). But when Woody Allen makes a serious movie in which he doesn’t appear as a wisecracking self-deprecator, his core audience becomes disenchanted.

Look closely at his writings. Who is speaking? The essays have more voices than Mel Blanc. Woody Allen creates characters, and creates himself as a character. When we read Benchley, Thurber, Lebowitz, and Perelman, there is usually a recognizable voice, a recognizable attitude or world-view, and that is comforting to us. Allen provides no such continuity. The comfort he supplies comes to the reader in the knowledge that he is going to be funny and we are going to be superbly entertained. But the persona is going to be different from piece to piece to piece. 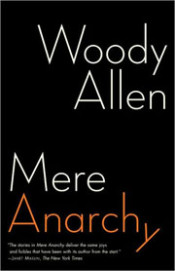 Picasso had many different styles, but his work more often than not contains some element that is recognizable as Picasso. Shakespeare’s plays in various genres are likewise unified by his language. But Woody Allen hides behind his styles so well that reviewers and critics complain he cannot be found. Fiction writers are rarely visible in their works, but who would confuse a story written by Graham Greene with one written by Hemingway or Faulkner? Style makes the presence of the artist felt, and in our celebrity-conscious times we demand that an artist create a continuity of voice and/or persona. Woody Allen does not.

All of the above weighs heavily upon Allen’s latest collection of pieces, Mere Anarchy (Random House, $14). In this collection, containing eighteen essays (ten of which originally appeared in The New Yorker) Allen cannot shake off the style of S. J. Perelman—or is he parodying it? See if you can determine who wrote the following paragraphs, Allen or Perelman:

Ran into Reg Milipede sometime back. Reg’s a gaming crony from those piping times in Jolly Old when I stood as poetry editor of Dry Heaves: A Journal of Opinion. If the truth be known, the two of us gave as good as we got over whist and rummy at the Pair of Shoes or Lord Curzon’s Club on the street that bears his name.

from “Sam, You Made the Pants Too Fragrant”

Biggs was a fubsy pudding of a character with a hairpiece that could only have been ordered by dialing 1-800-Toupees. A farrago of tics animated his face in unpredictable dots and dashes like Morse code. Clad in pajamas and the Carlyle’s terrycloth robe, he was accompanied by a miraculously fabricated blonde who doubled as secretary and masseuse, having apparently perfected some foolproof procedure to clear his chronically stuffed sinuses.

from “This Nib for Hire”

Surprise—they’re both by Allen. But the Perelman touches are all here: The exotic and extravagant vocabulary (“Fubsy pudding,” “a farrago of tics”), the British-isms (“piping times in Jolly Old”), and the silly names for people and organizations—one of the oldest comic devices, stretching back to the plays of Aristophanes. Here is a list of comic names used by Allen in Mere Anarchy, side by side with a list of names invented by Perelman:

“Thimig” would be a perfect name for a Charles Dickens’s character, and Dickens obviously used comic names in his novels, but in a novel there are only a few such names spaced throughout a long narrative. In a collection of humor pieces, however, when within almost every six or seven pages new characters emerge bearing absurd monikers, the device becomes somewhat tiresome. Hence, follow an old reader’s advice: don’t read humor collections from cover to cover. Allen’s literary writings are meant to be taken one at a time, the way they were published in periodicals; dip into them at reasonable intervals and the comic devices used over and over will have their desired effect.

Also, it is perhaps worthwhile to point out that Allen’s pieces in Mere Anarchy are, because of his deep bow to Perelman, quite different in style from his earlier works. Here is the opening to “My Apology” from Side Effects (l980):

Of all the famous men who ever lived, the one I would most like to have been was Socrates. Not just because he was a great thinker, because I have been known to have some reasonably profound insights myself, although mine invariably revolve around a Swedish airline stewardess and some handcuffs.

Compare that with the paragraphs quoted above and the differences are obvious: no fancy vocabulary, no silly names, no Perelman in sight. Is the earlier style the real McCoy? Perhaps. But we don’t read humor to plumb the depths of the author’s identity. We read it for laughs and comic vision. Mere Anarchy gives us the laughs, and expands Woody Allen’s comic vision.