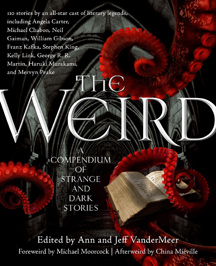 The Weird: A Compendium of Strange and Dark Stories is the ultimate companion for readers who relish strange, luminous, decadent tales of the “other.” An essential addition to any bookshelf, the aptly named compendium contains 110 stories; it recently won the 2012 World Fantasy Award for Best Anthology. Compiled by the thorough and prolific husband-and-wife team of Jeff and Ann VanderMeer, The Weird is a long trip into the area beyond the everyday.

The Weird includes essays by Michael Moorcock and China Miéville who each attempt to define the weird tale. Moorcock defines the weird tale as “a term covering pretty much anything from absurdism to horror, even occasionally social realism” and that a weird story’s primary purpose is “to disturb.” However, Miéville suggests that the reader is what brings the weird to a story:

Weird travels with us, each reader a Typhoid Mary in every library. It passes from us into pages, infects healthy fiction (pretend for a moment that there might be any such thing). A virus of holes, a burrowing infestation, an infestation of burrowingness itself, that births its own pestilential hole-dweller.

As the VanderMeers explain, weird tales are not necessarily horror, fantasy or science fiction, but they sometimes overlap across those genres. The editors deliberately chose works that go beyond what they call “the rise of the tentacle” to the modern weird tale, “fiction in which some other element, like weird ritual or science fictional, replaces the supernatural while providing the same dark recognition of the unknown and the visionary.”

Drawing from a deep, murky pool of possibilities, The Weird includes stories published between 1908 and 2010, including the usual suspects (Shirley Jackson, H.P. Lovecraft) as well as other authors who are a bit of a surprise (Jamaica Kincaid). The VanderMeers cast their net widely:The Weird includes new translations from Japanese and Latin American authors, as well as selections from Eastern European, African-nation, and women authors (categories of writers too often left out of Western-published anthologies). Entries range in length from short stories and novellas to short novels. Arranged in order of first publication, the works, when read in that order, show layers of influence between countries, genres, and movements.

Although the editors say The Weird is not “as complete as an encyclopedia,” the volume’s breadth of field and substantial heft almost contradict their claim. With a thoughtful foreword for each entry, the VanderMeers refer the reader to additional works by each author, along with a short biographical note and the reason for the story’s inclusion. And, should over 1100 pages not be enough for the reader, the editors’ foreword even includes a list of additional recommended works that they were unable to secure for the anthology.

The Weird, encompassing everything from ancient horrors to modern angst, will delight any reader who likes fiction that both clouds and opens the mind. No matter what genre one enjoys, this collection will not only fulfill expectations, but also will introduce the reader to new authors or authors long buried in obscurity. From the supernatural to the surreal, The Weird’s more than 750,000 words propel the reader into another reality, one that in the editors’ words, is “unapologetically transgressive, imaginative, and strange.”