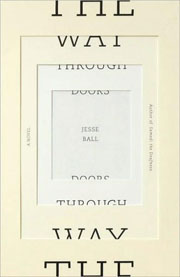 What wonders will fill its pages? He makes notes towards its construction, building in his head and upon the page schematics of impossible architecture, pathways that stretch out across water, preserving in themselves a flatness of the earth to oppose every roundness, or a house in which all sound is diverted and played both upon and with, moved here and there, at distance and closeness, words sometimes amplified, sometimes dampened, and phrases cast upon precise winds, both proscribed and known.

Few novels can boast an architecture as equally intricate and unobtrusive as that of Jesse Ball’s The Way Through Doors. Composed of discrete small stories suspended within the whole like seltzery bubbles—and, more essentially, of narratives that flow into and succeed one another without closure, like waves that spill onto the shore before the ebb of their predecessors have fully deserted the sand—the book somehow remains safe from the boastful posturing of metafiction; the sexy machismo of a Borges or Calvino is entirely absent from the open rooms of Ball’s creation, with their delicate, spindly furnishings, and their wet, blissful, saline scent of spring.

The book exists to save a life. It is the story that Selah Morse, a municipal inspector of the Seventh Ministry, tells to keep the girl with whom he suddenly finds himself in love, Mora Klein, who has been hit by a taxi and who has lost her memory, from falling from concussion into the seductive sleep that spells death. Selah begins to tell Mora the story of how he loses her, and how he embarks on a quest to find her again.

Selah’s narrative, however, soon melts into the story that one of his characters, a Chinese chef, begins to tell about her grandmother. And that sighs into the story the grandmother tells, of a gambling man who loses his beloved to a throw of the dice. It nudges into the story that a black-bearded blacksmith, within the grandmother’s story, tells to the gambling man, about a Coney Island guess artist who meets Selah Morse and joins him in his search for Mora. It fades into the story told by one of the guess artist’s characters, the frightened but dapper old man Piers Golp, about a young pamphleteer and his mischievous beloved, Sif. It merges into the story that Gustav, the assistant to Piers Golp’s version of the blacksmith’s guess artist, tells about a beautiful empress ravaged by love for a count. It drifts into the story told by the count about his dream of a vineyard, which dissolves into a dream about a municipal inspector named Selah. And so on, and so forth, through uncountable additional permutations, retellings, and revisions, to the far reaches of delight, Ball proceeds, without ever ceasing to move the central plot of Selah’s search for Mora compellingly forward.

If this sounds grandiose, even bloated, it’s not—there’s something bashful and quiet about the way Ball develops his structures and presents his language, something innocent but not naive. His architectures are full of architecture: imaginary mnemonic mansions; lairs reached by ladder; hospital rooms built with screens inside sprawling wards; chutes hidden behind panels; apocryphal Ministry buildings in the grand Federalist style; hallways full of doors “great . . . in size and finery”; the fabular inn in Som, within which the centers of the many narratives are pinioned; a dead-letter office in which a mountain of lost communications threatens to avalanche upon a home without walls or roof; a nightmarish Victorian house, an exitless mousetrap, that dirigibles through the sky; an ice palace in which brutal erotic travails are open to the public eye; a tower of needles poised upon needles—”the sort of needle that might be used to sew your heart shut with rope”; a house that a wife of incomparable beauty, a marionette both adulterous and betrayed, defiles with secret hiding places; a town with poisoned arcades through which, at the right time of day, at the moment of the perfect coloration of the stone, people would pass and then “simply be gone”; a lusciously carpeted staircase that penetrates a pit, at the bottom of which wait foxes in human form.

To say that Ball’s voice is self-conscious would be to suggest, wrongly, something selfish, stilted, and effete. But the author does use antiquated or rusticated diction, not with sour or smirking irony, but deliberately, as a favorite indulgence. He has a penchant for comparisons that are slightly absurd in their specificity and charmingly ungainly in their length, such as “He wore a long beard in white, and was dressed as one imagined an old gentleman might have dressed in the year 1927 in the city of Warsaw,” or “the sailmaker resembled the hibernating bear of Eskimo legend that tells all the secrets of the world while still in its behusked sleep,” or “[He] wore the simple attire of the sort of person perhaps who researches sin in the depths of the Vatican but is not a priest at all and goes often flower picking in the country by himself, never speaking to anyone he sees there,” or “His uncle’s face looked like the seventh whisker of a devil-cat intent upon the stalking of its prey.”

These work best when they come out of nowhere; the effect can be too coy, too easy, when they make trivial play with what’s already on the page. “Perhaps he resembled an animal that had been turned into a human being by some accident, and now was trying to make the best of the situation,” for instance, is disconcerting and transfiguring; while “a quiet voice that had only ever been used just after slamming cleavers into wooden tables,” when used to describe a voice that speaks immediately after its owner has slammed a cleaver into a wooden tables, is simply silly.

Ball rarely makes slips like this, however, and that success in avoiding self-stereotype is a triumph for a style that’s so instantly recognizable. The odd, stiff, wistful, wry, vague, crafty, nimble, luminous tone that addicted fans of his previously published novel, Samedi the Deafness (Vintage, 2007), is in full evidence in The Way Through Doors, though this new book is at once more elaborately structured and more oceanic than its predecessor. Still, one can’t help but feel that Ball is holding back something crucial—he seems to be afraid of the dark, and that keeps him slightly trivial, slightly tricksy. In his story “The Early Deaths of Lubeck, Brennan, Harp, and Carr,” published in the Winter 2007 Paris Review, he does venture into nightmarish territory, but in this book, his characters tremble on the very periphery of joy and horror, unable to go further. Instead, when they meet those extremes in others, they watch, with noses pressed against the glass: intrigued, and moved, and removed. That tenuousness could easily become a weakness for the author. For now, it’s one of many fragile, beguiling, seductively frustrating beauties in Ball’s growing body of work.