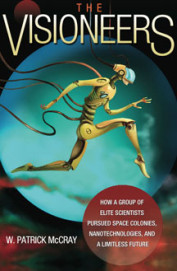 W. Patrick McCray’s The Visioneers tells the tale of a few charismatic people who tried to change the world through the invention of new machines. The book does not focus on science fiction, but rather the scientists and forward thinkers that influenced them. Science fiction writers are easier to popularize as visionaries, but here the scientists get their credit.

The story mostly concerns Gerard O'Neill, who didn't believe in limits and dreamed of space exploration and designed space stations, and Eric Drexler, who probed the possibilities of the small and curious, eventually getting the public excited about nanotechnology. These two went on to author famous and influential science books: The High Frontier by O'Neill in 1977, and Engines of Creation by Drexler in 1986. Their story is embedded in a longer tale with all sorts of public popular personas like Stewart Brand (The Whole Earth Catalog), Timothy Leary, Robert Heinlein, Buckminster Fuller, Freeman Dyson, and others. Some made contributions, but to be considered a “visioneer,” one must also have tried to get the public involved. One who “did not strive to popularize his ideas to a wide audience, build a large community of supporters, or engage the interest of policy makers” cannot be considered a visioneer. In contrast, “the visioneering of people like Drexler in the late 1980s and throughout the 1990s helped create excitement and high expectations among business-people and journalists.”

Mapping the future is more difficult than exploring the history of technological breakthroughs; in the hands of a good storyteller, it is also more exciting. Part of the problem with this book is that the information within is dryly presented, though McCray does point out that all visioneering is not benign, and its proponents may get a bitter lesson: “Merely demonstrating that something is technologically feasible is no guarantee of success.” While it lacks the action, tension, and moral message found in much science fiction, readers will learn a great deal by reading this book.