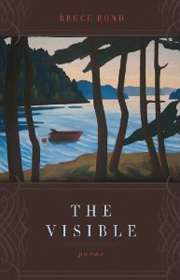 Three masters of beautiful but abstruse language came to mind as I read this eighth collection of verse by Bruce Bond, born in 1954 and now a professor of English at the University of North Texas: Wallace Stevens, who died in 1955, and two now-elderly icons of American poetry, John Ashbery and W. S. Merwin. These are Bond’s poetic ancestors, whether he likes it or not; Bond’s own acknowledgement to Walt Whitman bears no sustaining evidence in this new book. Still, perambulations of imagery, metaphors winding through each other, can be enjoyable to read when deployed by a skilled writer.

Here are the opening and closing strophes of “Constellation” (dedicated to George Bond, presumably the poet’s father):

So many nights since your final night,
so many years between these words
and a motel breezeway in the desert,
overhead a body sketched against
the black, its eyes nailed with tiny fires.

Do you go out as a gift made new
in the hands, if you can call them hands,
in the pinned eyes of someone else’s gods—
I named them as a boy—of beasts,
of heroes, of the bewildered stranger.

Another tribute, this one to his deceased poet friend Bert Meyers, displays the near-rococo element of irony, gently sifted as Bond is wont to do. Meyers died of cancer at fifty-one. The opening lines of “The Convalescence of Summer” convey strong tribute to a fellow writer now gone:

Slowly the mouth of the wound closes.
The clock wipes its forehead.
Sunlight threads the eye of the steeple.
Everywhere you look,
a crossing over. The flower
torn open, a bending of the stem.

Other poems—“People,” “The Strangeness of Knowing Well,” and “Oracle”—give ample testimony to the watchfulness of an ever-observing poet. In a 2001 interview, Bond remarked that many cultures other than the Judaic-Christian ethos have opened his awareness, his curiosity, about the world as it changes, and as he changes, as he imports these perceptions into his work. “The test is whether I could feel strongly enough about something to have a dream about it,” he told Maggie Paul of Poetry Santa Cruz. “I suppose when I was an undergraduate, Emerson and Jung had a great influence on me, and much of their openness to other cultures and their commitment to the centrality and spiritual significance of immediate imaginative life has rubbed off on me.” I’d say it has indeed “rubbed off” and his work has been the better for it.

In a more recent (2010) interview with Brian Brodeur on the website How a Poem Happens, Bond observed that consciousness and inspiration are not divorced but not always synonymous, that there is something else underneath, not always visible: “Sure, I believe in inspiration, though I’m also a big believer that the imagination need not vanish once our critical intelligence becomes engaged . . . there is an integrity to our unconscious, a wisdom that is often a couple steps ahead of the critical mind.” A good example of this idea is found in “The Strangeness of Knowing Well”—here are the opening and closing lines:

In a world where anything can happen,
we’re hardly surprised when anything does.
And so sleep is never so odd as another
morning. The radio clicks in your ear,
and the room wells up with human voices.
And who can resist it . . .

Even the novelties of birds return to wake you,
what’s left of you. Always your singular
body startled out of the dark like dice.

The Visible is replete with beauty, if on occasion imagery that is a bit too slippery. Perhaps this is an essential part of the attraction, as it is with Stevens, Ashbery, and Merwin. Bruce Bond is a general in the army of swirling images, marching into inimitable literary posterity.