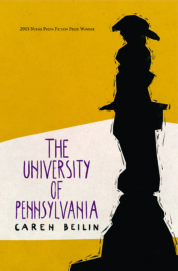 Caren Beilin’s novel The University of Pennsylvania is a delightful affront to phallocentric sensibilities. Subversive, challenging, and oftentimes surreal, Beilin’s transgressive account of “womb duplication”—an affliction of continual menstruation that strikes University of Pennsylvania undergrad Olivia Knox—defies narrative expectations down to its very use of language. A multitude of vague, viscerally haunting plot lines and images converge—the relationship between William Penn and George Fox, a slaughterhouse of horse carcasses and animal bones, and Olivia’s menstruating blood that fills the halls and dormitories of the school. There are sexual encounters with statues, a scene of rape, and not a small amount of cocaine (or is it horse gelatin?). The University of Pennsylvania is concerned with what has been historically suppressed and hidden, in particular the female body. Olivia’s unceasing menstruation never lacks for fantastic imagery: “It is not just blood! It is full of marbles and beans, sometimes thick enough to be black, sometimes sick enough to be brown, sometimes wild, almost violet again.” Beilin’s prose assaults the senses, at times demanding to be read aloud. Her Joycean turns of phrase—“moonbutterous blackbread” to describe the asphalt at a convenience store at night, “rubydung” and “robinbattle” as the color of blood—only heighten the level of surreality that dominates the text. The University of Pennsylvania is uncomfortable, weird, and radical in all the best ways—readers interested in an unabashedly feminist novel that pushes the boundaries of taboo should look no further.