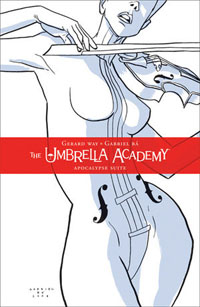 Every story must deal with the problem of how to keep the reader moving forward. In prose, where the line of letters leads off one page and onto the next, it’s relatively easy. But in media that marry words with pictures, there’s an additional challenge, since the reading eye might lose its way in the images. It’s not enough to put something intriguing in the last panel of every second page; a good comic needs to balance the novelty and interest delivered on each visual spread with the expectation of something at least as novel and interesting on the next—not to mention the challenge of bringing the reader back for another issue in a month’s time or another graphic novel in a year’s.

Gerard Way and Gabriel Bá’s The Umbrella Academy: Apocalypse Suite begins with a full-page illustration of a wrestling match between a human and a giant space-squid, setting both the time and the tone of the story, and it barely pauses for breath after that. In its essentials, the narrative resembles any of a number of superhero team books: it follows a group of child superheroes, formed into a team by a wise yet mysterious benefactor, that reforms after years apart, upon the benefactor’s death. But this bare-bones synopsis captures nothing of what makes The Umbrella Academy so dazzling: writer Way has used the somewhat familiar setup as the scaffolding upon which to hang a tale that revels in its own complexity.

Way—better known to many as the lyricist and frontman of the rock band My Chemical Romance—is an admirer of Grant Morrison, the famed writer behind the pop-surrealism of the 1980’s revival of DC’sDoom Patrol, and there’s a certain Morrison-esque density of cool ideas in Apocalypse Suite. Morrison, who writes the introduction for this collection, says it reads “like the work of a veteran master of the form.” Way’s imaginings, although punctuated with darker moments, don’t have underpinnings quite as dark as those that brood beneath some of Morrison’s work. When more serious moments do emerge, particularly late in the volume, they serve as momentary pauses that counterpoint the exuberance of the rest of the comic.

The artwork, by the Brazilian Gabriel Bá (who also illustrated the first storyline of the equally over-the-top comic Casanova) is a terrific match for Way’s writing. Clearly, if you’re publishing a comic that includes a major character whose human head is perched atop a gorilla’s body, a woman who’s part dressmaker’s dummy and part see-through-anatomical model, and a robot/zombie version of tower architect Gustave Eiffel, and you haven’t lined up Gabriel Bá to do the art, something is very wrong. This is not just because of Bá’s ability to render the unusual—which is considerable—but equally due to how he can make every panel, even those concerned with more ordinary characters and occurrences, just as striking.

And, of course, when faced with scenes where the dialogue consists of, for instance, a child hero saying, “It’s a good thing these old levitator belts were lying around,” and his simian associate answering, “Yes, because there’s nothing conspicuous about a ten-year-old boy flying around with his monkey,” Bá does not disappoint. Indeed, with all their levitating chimps, homicidal violinists, and undead French architects, The Umbrella Academy manages to deliver the surreal and the just plain odd with energy, wit, and style. Luckily, Way and Bá have a second story-arc about to get underway that promises more of the same.