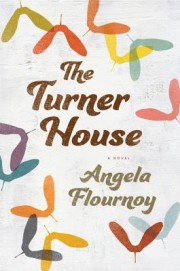 Angela Flournoy’s debut novel The Turner House is a thoroughly engrossing saga spanning more than a half-century in the lives of an African American family in Detroit. Through the Turners, Flournoy—a graduate of the Iowa Writer's Workshop and a real talent to watch—explores the complexities of family histories and relationships, siblinghood, parenting, and aging, all with deep empathy and zero sentimentality. The city of Detroit plays an important role, as wounded and doggedly resilient as the book’s characters. And though it is possible there is a supernatural presence lurking on the outskirts of the story, it is the past that truly haunts the family.

As the novel opens in 2008, the thirteen Turner siblings are at a crossroads. Their father Francis is long dead and their mother, Viola, is gravely ill and being cared for at the home of the eldest son, Cha-Cha (nickname for Charles). The original family home now sits abandoned, like too many others on Detroit's decimated East Side. The Turner children must decide what to do with the house—sell it for a pittance or collectively pay off the remaining mortgage—while coping with their own complicated lives. Though they have scattered, with many of them living far from Detroit, the house tethers them, a reminder of younger, happier days: "The house on Yarrow Street was their sedentary mascot, its crumbling façade the Turner coat of arms."

The book focuses on the oldest and youngest siblings of the Turner’s baker’s dozen, Cha-Cha and Lelah, born an entire generation apart (he’s in his sixties and she’s forty-something). They are both in different states of crisis. Cha-Cha, resentful that he’s become the de facto father figure to the Turner clan, has become obsessed with the return of a "haint" (ghost) who he claims attacked him in the middle of the night when he was fourteen and is again haunting him nightly. The haint, real or imagined, manifests the growing, pervasive sense of helplessness Cha-Cha feels as he grows older, losing control of his life. In addition to managing sibling conflicts over the house, his relationship with his wife Tina has become troublingly distant while he has become enamored of his female therapist, Alice. Cha-Cha, accustomed to being the family’s rock and tormented by the haint, feels increasingly isolated and unstable.

Meanwhile, Lelah has lost her job and has been evicted from her apartment—both events fallout from her gambling addiction. Desperate, she secretly moves into the empty family house and enters into a haphazard affair with David, a friend of her younger brother, Troy. She hides her dire financial circumstances from everyone, including her adult daughter, Brianne, with whom she has a fraught relationship. It is clear that Lelah has been living in quietly controlled chaos for much of her adult life, with everything now unraveling. It is also evident that she has no real idea of how to improve her circumstances. But despite her problems, Lelah, like Cha-Cha and the others, never indulges in self-pity, preferring to go it alone. This familial stoic resourcefulness is a double-edged sword: taking after their father, the siblings have a hard time reaching out for help.

Flournoy intercuts her modern-day narrative with the lives of the Turner's parents in the 1940s-50s. When Mr. Turner, Francis, migrated from Arkansas to Detroit to find work, Viola stayed behind with baby Cha-Cha, waiting for the day Francis would have enough money to send for them. This proved to be a much longer and more arduous period of time than either had suspected, with job options for African Americans in the North proving almost as limited as in the South. It isn't until 1951 that they manage to purchase the Turner House, an emblem of hard-won economic stability, especially given the rampant racism in the Detroit housing market. Flournoy underlines these grim facts in the narrative, reminding readers of the systemic problems the Turners and thousands of African American families like them endured. In the present day, youngest son Troy articulates the role racism played in the severe economic downturn of Detroit: "the surrounding suburbs hadn't wanted to do business with them—they essentially boycotted the newer, blacker Detroit—which would devastate the city's economy."

The cast of characters, from the main to bit players, all feel authentic: sympathetic, confused, spirited, obtuse, loving, stubborn—that is to say, fully human. As the story nears its conclusion, despite all their numerous conflicts and heartaches, the whole family gathers for what will likely be the last birthday celebration for Viola—a reminder that the family ties that chafe also unite. Flournoy is adept at conveying the sense that it is with our families where we can most be ourselves, however comfortably or uncomfortably: "The love pivoted between hard and unwieldy and tender and sincere." Though the futures of Cha-Cha, Lelah, their siblings, the family house, and Detroit itself are left undetermined, we leave the story with a nourishing sense of hope.