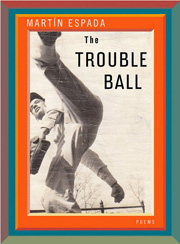 The title poem of Martín Espada’s The Trouble Ball is dedicated to the poet’s father, Frank Espada, who is pictured on the cover of the book as a young ballplayer in 1947, his leg kicked high, his arm reaching back with the ball mid-pitch, as though it’s the book itself he’s delivering, the poems in its pages meant to “trouble” something inside us. The poem recounts a trip Frank took as a child to Ebbets Field, where he expected to witness the pitching of the great Negro League player Satchel Paige: “¿Dónde están los negros? asked the boy. Where are the Negro players? / No los dejan, his father softly said. They don’t let them play here.” Among the intriguing and playfully named pitches Satchel Paige invented were “The Trouble Ball, / The Triple Curve, The Bat Dodger, The Midnight Creeper, The Slow Gin Fizz, / The Thoughtful Stuff,” this last pitch so called because it gave hitters something to think about as the ball crossed the plate. Over the course of his career as a poet and a poetic “troubler” of official narratives wherever they assert themselves too emphatically or unjustly, Espada’s stuff, like Paige’s, has been nothing if not thoughtful. Here he recognizes the national shame of racial segregation, but the poem does more than simply point out injustices of the past, filling in some historical blank or other; rather, it transforms the past so that “It is forever 1941,” and we’re asked as readers to try our hands at pitching, or catching, or taking our best swings at Trouble Balls of our own.

As others have aptly pointed out, Espada is an heir to Whitman, who called baseball “the American game: I connect it with our national character.” Not surprisingly, Espada has written poems about baseball before: “Watch Me Swing” in Trumpets from the Islands of Their Eviction(Bilingual Press, 1987) shows the poet working on (and being laid off from) the cleaning crew at a ballpark; the graceful and celebratory “Rain Delay: Toledo Mud Hens, July 8, 1994” fromImagine the Angels of Bread (W. W. Norton & Company, 1996) ends as a season of drought ends and “farm boys with dripping hair / holler their hosannas to the rain”; and “The Fugitive Poets of Fenway Park” imagines another of his poetic forebears, Pablo Neruda on the run from the Chilean secret police, “burly and bearded in a flat black cap, hidden / in the kaleidoscope of the bleachers.” When he has written about baseball, Espada has done so lovingly but pointedly, each poem using baseball as an occasion to address other issues, connecting a more or less personal history with the narratives of our national past.

Though the collection as a whole is not really about baseball, it does dwell in the body in a way Whitman would approve of, contending that “national character,” not to mention spiritual truth, can be found through attention to the blood and muscle of our physical selves. In “The Spider and the Angel,” for instance, the young poet discovers a facet of his Puerto Rican identity at a day camp:

The counselors steered us to the roof
of a school building in Brooklyn,
slapped down soggy mattresses
and told us to wrestle.

Because of his “crippled Spanish,” the poet’s Puerto Rican identity is questioned among his fellow campers, but he proves himself fierce enough as a wrestler that the other boys “realized then / that I was Puerto Rican after all.” Proof and approval are found here in violent bodily exertion. Similarly, in “People Like Us Are Dangerous,” the poet recalls how he idolized “Carlos Ortiz, lightweight champion / of the world from Ponce, Puerto Rico.” Part of this hero worship is the swelling of a national pride in the young poet; another part is the desire to embody the boxer, “to be Carlos Ortiz”:

Hands are important to Espada. Think of the titles of some of his earlier poems: “Rebellion is the Circle of a Lover’s Hands” (1990), “Hands Without Irons Become Dragonflies” (1996), “Ghazal for Open Hands” (2002), “Not Words but Hands” (2006). The Trouble Ball continues this meditative concentration on the power of hands. In “His Hands Have Learned What Cannot Be Taught,” for instance, the poet’s son deals gracefully with one of his mother’s seizures: “My son, not yet seventeen, / leans across the table / and shuts her eyelids / with the V of his fingers.” Here the hands of a boxer are traded for the gentle hands of a loving boy, pugilism resolving itself into tranquility. In another poem, hands hold the key to both consolation and salvation:

Somewhere a convict sobs into a book of poems
from the prison library, and I know why
his hands are careful not to break the brittle pages.

For Espada, hands are the sacred vessels for cleverness, compassion, hope, justice, redemption, but in the form of the raised fist they are also the equally sacred vehicle for protest. When Carlos Ortiz says “People like us are dangerous,” he means not only the physically dangerous but also the politically dangerous, among them the poet Jorge Montealegre, “another name on the list of subversives,” who was imprisoned following the military coup in Chile on September 11, 1973. In “The Buried Book of Jorge Montealegre,” which echoes the work of Espada’s Pulitzer-nominated The Republic of Poetry (W. W. Norton & Company, 2006), the Chilean poet uses his hands not only to write his poems but also to preserve them, “clawing at the earth” to bury his book so that he might save it from being burned by the police.

At the heart of Espada’s poetry is a contagiously earnest faith in the written word as a vital means of political protest and spiritual salvation: “Let the blasphemy be spoken: poetry can save us,” he writes in “Blasphemy.” Ironically—or perhaps fittingly for a poet who in a previous collection referred to himself as “a boastful atheist” —the poem following “Blasphemy” is called “Epiphany,” which is blasphemous in its own way, undermining the conception of epiphany as a sudden revelation of the divine:

Though the poem is dedicated to the British antiwar poet Adrian Mitchell and alludes to his famous Vietnam War-era poem “To Whom It May Concern,” the “screaming horse” makes it hard not to think of Picasso’s Guernica. Even so, “Epiphany” is not about a specific city or a specific war; Espada wants to evoke the wartime suffering of innocent civilians wherever they are. The poem takes a strange but brilliant turn by introducing a new comic-book hero, “Whit-Man.” Espada lists Whit-Man’s superpowers by incorporating images and phrases from “Song of Myself”:

Walt Whit-Man. Whit-Man could not fly, yet he soared over mountains,
seeing the fur trapper and his native bride, the panther pacing in the branches.
He did not brawl with grinning villains, yet he was one of the roughs,
yanking doors off hinges, shouting about the rights of them the others are
down upon,
as the auctioneer of shackled men and women cowered in his shadow.

Whit-Man’s powers are, like Espada’s own, the visionary powers of the imagination and the connective powers of empathy and identification, each of which is guided by a commitment to advocate for others, especially those whose voices have been silenced. Espada’s poetics of advocacy is certainly on display in The Trouble Ball. His poems fight for “the rights of them the others are down upon” so that we all might experience something like epiphany—not “a blazing light” but “the flickering revelation” that poetry may not be able to save the world, but when it’s written with such compassion and lyrical grace, it can at least save individual readers by troubling something in their hearts.