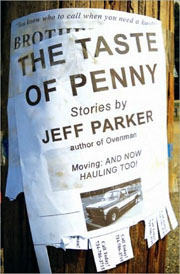 Contemporary short stories of true weight have the ability to transform our view of the world we inhabit, as they can trigger a moment of clarity amid an increasing saturation of cultural noise. Jeff Parker's story collection, The Taste of Penny, succeeds brilliantly in this regard, exposing personal and political absurdities with a supple, serio-comic tone and wire taut dialogue.

Intent on demonstrating exactly how we make meaning of our lives, Parker's stories engage the reader at the gut level. They provoke an immediate identification with their characters' various modes of being, whether from a standpoint of cultural isolation, as in stories such as “False Cognate” and “The Briefcase of the Pregnant Spylady,” or from the more familiar contemporary vantage of personal loneliness, as in the cycle of “James Stories” and the surreal yet quietly poetic “Our Cause.”

Parker's power as an artist rests solidly on his ability to bring genuine tenderness to stories that could easily slide into semiotic chatter. This is most evident in the stories “False Cognate” and “The Boy and Colgnate,” which use the trope of language confusion as a locus for the characters' existential anxieties. Instead of erring on the side of intellectualizing the conceptual quality of his fiction, Parker retains a vital and strikingly human interest in the way people are tangibly affected by the breakdown of sincerity. For this reason, these stories are buoyed by an unapologetic and deeply complicated sentimental sensibility that never strays into the easy cynicism and banal cleverness a less mature writer might resort to as a convenient escape hatch. Parker is comfortable in standing behind his fiction, and this confidence informs the collection throughout.

Interestingly, the most obviously political story in the collection, “An Evening of Jenga,” is paradoxically the most apolitical because of his remarkable handling of tone. Involving a seemingly harmless game of tower building among a group of variegated expatriates, the buried resentment of the narrator arrives with dramatic and terrifying force, exposing the kind of disquieting violence in the American imagination that is indivisible from national policy in the post-9/11 world. In this story, Parker does not demure from portraying ugly paranoia from a disarmingly non-judgmental perspective. The congenial guidance of moralizing is absent, making it a blank-faced insight into how we live with profound hate of the Other.

Parker's first book, the novel Ovenman (Tin House, 2007), treated the experience of service industry subculture. In The Taste of Penny, he retains much of the humor and sharp prose of that effort, but expands his powers of compassion, humanizing the most brutal elements of a world that often blinds itself to its own brutality. The result is clear-eyed, necessary, and above all, sincere.