Eddie Vedder tore apart a hotel room when he found out Kurt Cobain had killed himself. “Then I just kind of sat in the rubble, which somehow felt right . . . like my world at the moment,” he later told a reporter. Pearl Jam happened to have a visit to the White House scheduled the following day, so on April 9, 1994, Vedder dusted himself off and appeared in the Oval Office. Fearing a rash of copycat suicides, President Clinton pulled the lead singer aside and asked whether he should address the nation. Vedder wisely counseled against it: such a speech would only generate more attention.

That the Leader of the Free World would consider publicly responding to a rock star’s death reveals how far Nirvana—and grunge music—had come. Just ten years before, Seattle was a town most major rock bands skipped on their tours, the kind of place aspiring musicians fled for brighter lights and bigger cities. But in the early 1990s, as if a butterfly flapped its wings in the temperate rain forest and set off a rock music hurricane, a series of Seattle bands topped the music charts, decisively knocking Michael Jackson and hair metal bands like Guns N’ Roses and Poison from their positions of dominance. Almost overnight, Seattle became a destination and a commodity. Over twenty years have passed and an entire generation has grown up and come of age since the release of those breakout albums from Nirvana, Pearl Jam, Soundgarden, Alice in Chains, and the like. Now seems a good time for a reckoning and accounting of whatever the hell happened back then. 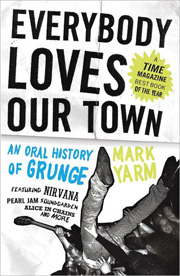 Two recent histories of grunge—Stephen Tow’s The Strangest Tribe and Mark Yarm’s Everybody Loves Our Town—attempt to do just that, in different but complementary ways. Both books illustrate that this story is funnier and more twisted and ironic than commonly understood. What most of us listeners outside the Seattle music scene think of as grunge actually started at least a decade before, and many considered grunge dead before it was born to the world. For instance, Mudhoney’s “Touch Me I’m Sick,” released circa 1988, is often credited as the quintessential grunge song, not Nirvana’s “Smells Like Teen Spirit.” “Nirvana’s ascendance would unintentionally pollute Seattle’s cultural waters,” comments Tow. “If they had not happened, Seattle would have inevitably moved beyond grunge by 1990, and likely garage [rock] would have predominated. But Nirvana did happen.”

As a professional historian, Stephen Tow combines considerable research and analytical abilities in The Strangest Tribe as he identifies the various elements that created this moment. Beginning in 1975, he catalogs and profiles the succession of bands, venues, local music publications, cheap recording studios, and independent labels that together created a healthy ecosystem for original music. His accessible, if somewhat flat-footed, prose condenses an immense amount of information, all with an eye toward the cultural and historical significance of the topic at hand. For example, when he assesses the impact of Op, a small publication based in Olympia, Washington, that reviewed independent labels and artists in the 1980s, he writes: “In the pre-Internet world, London and New York media outlets drove the direction of popular culture. Any trends with any validity typically emanated from the two cities and, after several years, made their way to U.S. West Coast cities and the hinterlands . . . Op changed all that. Perhaps for the first time, music fans around the country learned about underground trends as they were happening.”

In Mark Yarm’s oral history, Everybody Loves Our Town, the story begins in 1985, at an infamous U-Men performance at the Seattle music festival Bumbershoot. Later called a bridge to grunge, the U-Men were the biggest act in town at the time, the band everybody admired. At the end of their set, two roadies poured lighter fluid into the moat around the stage, and the lead singer, John Bigley, ignited the water, creating a brief but intense wall of flame. “I was blown away by the audacity of it. I’m sure if there was a panoramic shot of the crowd, virtually everyone who ended up in a band or was in a band at the time was at that show. I think if you were in a band and you saw that, it made you step up your game.” This observation comes from Kerri Harrop, an employee of the Sub Pop record label, one of over 250 people Yarm interviewed. Although based entirely on testimony, the book arranges quotations in a narrative collage organized around themes, events, and personalities. It reads like a Russian novel, with the requisite huge cast of characters, convoluted but compelling plot line, absurd humor, existential crises, and pervasive gloom. 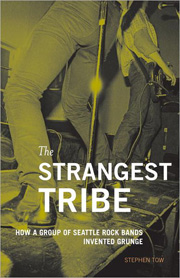 Although the two books cover the same territory, their different approaches underscore the uncertainty that underlies much of this history. Consider the murky origins of the word grunge for this genre of music. As a historian, Tow offers a definitive explanation: “[Bruce] Pavitt created and hyped the term ‘grunge’ to describe Sub Pop’s bands . . . Pavitt’s use of the term perfectly described Mudhoney and Sub Pop’s early bands. Within a few months, ‘grunge’—initially used in a joking manner—would take on a life of its own.” As evidence, Tow cites a snippet of Sub Pop publicity for the prototypical grunge band Green River. In contrast, Yarm’s oral history spins together a series of snapshots from inside the whirlwind of hype surrounding the term, both explicating and undermining any kind of definite etymology. One person portrays the Sub Pop guys pulling it out of a thesaurus. Another cites a fake hate letter Mark Arm (lead singer of Mudhoney) wrote about his own band back in ‘81. Then, David Duet from Catt Butt mentions putting grunge in a band logo in the late ‘80s. And finally, Jack Endino claims to have tossed the term around all the time before it became popular. “No one fucking knows, and frankly I don’t think anyone really wants to take credit for it,” Endino concludes. “So let’s leave it at that.”

This deep ambivalence toward the term derives from what happened in the 1990s. Nothing demonstrates just how heated and bizarre things got more than the tale of the “lexicon of grunge.” A journalist from The New York Times called the offices of Sub Pop in 1992, curious about grunge slang. “One problem remained, however,” comments Tow, “there was no hip grunge slang.” Weary of media attention, the former Sub Pop receptionist Megan Jaspers thought she’d have a little fun. “Why don’t you give me words, and I’ll just give you the grunge translation,” she told the reporter. Here’s a select list of what ended up in the article:

The band Mudhoney thought the list hilarious and began dropping grunge lingo into their interviews. The record label C/Z made “Lexicon of Grunge” T-shirts with LAMESTAIN on the front. When the Times found they’d been duped, they weren’t happy. Still, when the editor of the Style section called to chew out Megan Jaspers, she did ask where she could buy one of those LAMESTAIN T-shirts.

It is telling how each book deals with the consequences of the Faustian bargain that propelled these bands to fame. Tow concludes his history with the release of Nirvana’s Nevermind and focuses on its effect on larger musical trends: “Prior to Seattle’s explosion, alternative rock meant simply that: rock bands whose songs did not receive play on commercial radio and whose videos did not show up on MTV. After Seattle, alternative rock became a commodity. Anyone who sounded like Nirvana became the new alternative rock.” By contrast, Yarm’s oral history is only half finished by the time Nirvana strikes gold. There remain hundreds of pages that chronicle the human toll of this unexpected storm of wealth and fame. (To make a long story short, the drug of choice was heroin, and the word of choice to describe what happened to individuals, bands, and the scene in general, is “implode.”)

If The Strangest Tribe were a Seattle band, it would be Mudhoney. The book was published by a small, Seattle-based independent press called Sasquatch Books and deserves more attention. A geeky and infectious enthusiasm permeates Tow’s work, and his approach allows him to emphasize the diversity of the Seattle music scene and profile a number of bands that didn’t fit into the grunge mold. The Seattle band equivalent for Everybody Loves Our Town is Pearl Jam: it’s a blockbuster of a book, with blurbs from famous people on the cover. Time just named it one of the top ten nonfiction books of the 2011. All this recognition seems justified, given the book’s breadth, quality, and hypnotic ability to absorb readers.

As many details as both books provide, they still leave open the question of what actually happened, not behind the scenes, as Yarm definitively tells it, but in the consciousness of those who listened to and bought this music. “Nirvana appealed to a disaffected Generation X who found modern music out of touch with their everyday angst,” asserts Tow, and although accurate, this claim is ultimately dissatisfying. Historians and journalists may be able to document, explain, and even show which way the wind blew, but why did it blow in the first place? This is a mystery to mull over but never answer as you play those old grunge tunes again. Rock on, lamestains.