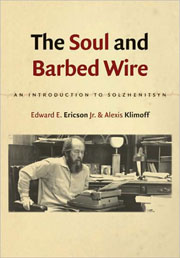 The Soul and Barbed Wire is not, as the subtitle quietly tells us, a critical introduction to the works of the late Aleksandr Solzhenitsyn (1918-2008). Nor is it “pure hagiography,” or “quasi-academic in form and published by a quasi-academic press,” as Keith Gessen writes in a review for Bookforum that omits crucial facts about Solzhneitsyn’s life.
To be sure, Edward Ericson, Jr. and Alexis Klimoff are fond of Solzhenitsyn to the point that, most of the way, they and their subject’s opinions appear to be identical. Readers are presented with counter-arguments others have had with Solzhenitsyn, and he himself is quoted as making this or that mistake, but his passionate advocates do not allow themselves latitude to say Solzhenitsyn ever did anything wrong.

Without knowing Ericson and Klimoff’s minds, one can speculate on the reasons for this. First, The Soul and Barbed Wire is meant for newcomers unaware of their subject as much more than a name, and such a reader would be confused by criticism. Second, there are more than enough harsh words on Solzhenitsyn mentioned so that any reader would know that there are contrary opinions out there. The authors quote David Remnick from 1994: “when Solzhenitsyn’s name comes up now it is more often than not as a freak, a monarchist, an anti-Semite, a crank, a has-been, not as a hero.” Third, so much has been written against Solzhenitsyn that the writers seem to have decided on a wholesale defense of his person and his work. For a time Solzhenitsyn was a figure on the world stage, but after arriving in the West in the mid-1970s, his opinions about the United States and others countries rubbed against entrenched, delicate sensibilities. A backlash eventually followed and interest in him gradually declined.

“And yet there is a potential benefit in the forgetfulness of an age known for its short attention span. With the eclipse of the polemics of the 1970s and ’80s, Solzhenitsyn’s total oeuvre can be considered afresh,” write Ericson and Klimoff hopefully, and to a large extent they reanimate past debate about his works while opening it up to further inspection. Apart from the introduction and end pages dealing with notes, bibliographies, and an index, the book divides into four sections: “Life,” “Works,” “Beliefs,” and “Reception.” “Life” reminds us that far from being born a fanatical Christian, Solzhenitsyn by the age of eighteen was “an ardent convert to Marxism,” who lost this belief only after being immersed in war and prison camps of different types where he mixed with others who demanded he question himself. (This debate training came in handy when he later had run-ins with writers wed to the Communist system.)

Ericson and Klimoff present Solzhenitsyn’s life concisely, endnoting much along the way. They take readers through his exile, his cancer treatments, his two marriages, and the extraordinary emergence of One Day in the Life of Ivan Denisovich (1962) during Khrushchev’s thaw. This break in the silence about prisons doesn’t last, and soon Solzhenitsyn is fighting again, eventually being expelled for the publication of The Gulag Archipelago in 1974. His life in the West is filled, at first, with addresses and confusion, then a wise retreat into seclusion, until returning to Russia in May 1994.

“Works” begins with Solzhenitsyn’s early poems (1947) and goes through to Literary Collection (2004), a series of “sketches” on various writers and their works. It is difficult to summarize a prolific literary career of more than fifty years. This section provides a general overview of the themes and concerns expressed in such works as Cancer Ward (1968), Harvard Address (1978), The Red Wheel (a tetralogy: 1983-1991), and Two Hundred Years Together (2001-2002). After each summary comes useful information on publication dates, in Russian and English. Translator Michael Glenny provides texts that contain “egregious errors and must be avoided” while H.T. Willetts receives high praise.

It needs to be stressed here, echoing Ericson and Klimoff, that Solzhenitsyn’s literary career is monumental. He wrote a great deal—in 2006, a Moscow publisher agreed to put out “a thirty-volume Collected Works”—in various genres: poems, short stories, novels, addresses, and essays. They deal with Soviet society, camp life and the generalized attack on freedom, cancer, war, the need for reconciliation within Russia between its citizens, and much else. Few writers of any time write one, let alone two, books—in this case, One Day in the Life of Ivan Denisovich and The Gulag Archipelago—that help undermine a totalitarian government and that expose the ghastly horror of a penal system located within a larger punitive setting. Inevitably, envy—which Ericson and Klimoff do not address—rises among writers who know that if placed in such an environment they could never accomplish the task of setting down prose that remains fresh while working in a secretive fashion to preserve one’s life.

Apart from envy, what often bothers some writers about Solzhenitsyn is his emphasis on an Orthodox Christian world view that allegedly ties into reactionary or backward politics and marks him as a creature of the past. The section titled “Beliefs” explains clearly how Ericson and Klimoff see Christianity woven into the books. “Many of these [Christian] references are presented obliquely to serve literary purposes immediately at hand, but others are presented quite directly,” they write. Solzhenitsyn doesn’t use aspects of Christianity or its symbolism as technical devices. For him, belief in religion and God means that there’s an Absolute, that the universe isn’t indeterminate, and that we live in a moral world. This is not what most postmodern or secular critics think. His certainty that God exists strikes those equally certain about atheism or Darwin as offensive. When reading Solzhenitsyn, if one keeps in mind that he’s entitled to his beliefs—just like astrologers, believers in trickle-down economics, or those who view everything as a matter of cultural studies—then concentrated consideration of the literary qualities of his writings remains possible. Open-mindedness is more fruitful than getting into ideological debates about Marxism or Orthodox Christianity.

Of course, judging a book’s literary qualities is also as a matter of taste. “Critically, the book [The Red Wheel] has been a failure both in Russia and the West. It’s huge, a lot of it is boring”: so writes Sheila Fitzpatrick in London Review of Books in the course of reviewing a new biography of Solzhenitsyn published in Russian in 2008. While agreeing that the “Anglo-American world” received The Red Wheel poorly, Ericson and Klimoff state that reviews in France “ranged from respectful to admiring.” The two volumes of this 6,000-page (in Russian) tetralogy that have come out in English (August 1914 and November 1916, published in 1989 and 1999 respectively) occasionally lose interest when events occur on the battle field, but are more than made up for in the sharp depictions of life in Russia during those hectic times, the machinations of politicians inside and outside the Duma, insights into the last czar, and a penetrating examination of Lenin. What Solzhenitsyn did in this encyclopedic work is present a view of world-shaking events. (If some publisher would offer English translations of March 1917 and April 1917, Anglo-American readers could better evaluate the worth of this sequence of historical novels.) There is probably no better place to go for a succinct examination of how The Red Wheel, and every title considered under “Works,” has been judged by critics than the “Reception” section of The Soul and Barbed Wire.

Ericson and Klimoff have written a book that can be argued with, as one would argue with Solzhenitsyn, but it’s worth as a guide is undeniable, and it will prove to be indispensable for every reader of Solzhenitsyn, new or old. Expect to be challenged, and to challenge what is read.