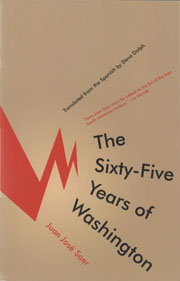 Angel Leto and an acquaintance named The Mathematician—who, deeply tanned and always dressed in all white, “seems less like a flesh and bone person than one of those archetypes you see on billboards, those for whom every contingency inherent to humanity has disappeared”—walk twenty-one blocks together through the city, discussing a party celebrating politician Jorge Washington Noriega’s sixty-fifth birthday despite the fact that neither of them were in attendance. In long, clause-on-clause sentences, this ambling conversation forms the basic plot of Argentinian Juan José Saer’s novel The Sixty-Five Years of Washington.

The peripatetic plot is merely a device for Saer to try out unconventional methods of narration and storytelling, all while relating the form to the content. The novel asks the reader to learn to read in a new way, as the details of the story itself are unfolded very slowly, with many pages going by between lines of dialogue. Everything is related in a very fragmentary way, seemingly to echo a thought the Mathematician had during a dream, in which there exists an “elemental mechanical paradox that demonstrates that motionlessness is what creates motion, that motion is simply a reference to motionlessness.” Some of the novel is narrated in a straightforward manner, as when the Mathematician tells a story in which he attempted to discuss his treatise called The Fourteen Points Toward All Future Meter with a celebrated poet (strangely, perhaps, one of the novel’s most gripping sections). At times, however, the narrator just slams everything to halt, and seems to focus on these moments of motionlessness and possibility, as in this early bit:

It is, as we know, morning: though it doesn’t make sense to say so, since it is always the same time—once again the sun, since the earth revolves, apparently, has given the illusion of rising, from the direction they call the east, in the blue expanse we call sky, and, little by little, after the dawn, after daybreak, it has reached a spot high enough, halfway in its ascent let’s say, so that, through the intensity of what we call light, we refer, to the state that results, as the morning—a spring morning when, again, though, as we were saying, it is always the same time, the temperature has been rising, the clouds have been dissipating, and the trees which, for some reason, had been losing their leaves bit by bit, have begun to bloom again, to blossom once more, although, as we were saying, it is always the same, the only Time and, so to speak, from equinox to solstice, it’s the same, no?

It’s a kind of writing that certainly won’t appeal to everyone, but Saer often pulls back, offering slightly more succinct descriptions, such as when Leto and the Mathematician evade obstacles on their walk: “simultaneously [they] bent their left leg, lifting it over the cable with the intention, more unconscious than calculated, of planting the bottom of their foot on the sidewalk, no? Alright then: they plant their feet.” (Those “no?”s that appear here are sprinkled all over the novel, as a reminder that there is a listener who is not a part of the story.)

The narrator jumps far into the future at times, explaining the ends of lives before we’ve even seen the end of the twenty-one blocks, and then back to the present, to slow the narrative back to barely moving. Saer plays a lot with this, all while peppering the novel with many quote-worthy sections, such as the Mathematician’s hatred of the “bloodlust bourgeoisie,” or this aside regarding another acquaintance, Tomatis, “for whom every example of the female sex whose measurements in the chest, waist, and thighs did not correspond to those of Miss Universe [was] an indistinct and transparent creature,” and the general nonstop flow of wisdom from the Mathematician, who insists that “whosoever looks to swim unaided in the colorless river of postulates, syllogistic modes, categories, and definitions should accompany his studies with a strict dietary regimen: fed on yogurts and blanched vegetables, the abstract order of everything, in its utmost simplicity, will be revealed, ecstatic and radiant, to the relentless, recently bathed ascetic.”

Saer makes use of that “utmost simplicity” with his easy plot, while ecstatically and radiantly writing of “the abstract order of everything” as well. It’s not a perfect novel—even at a slim 203 pages, it’s a bit overlong and the middle passage gets tiresome—but the opening and closing thirds are phenomenal, demonstrating a dazzling unification of form and function.