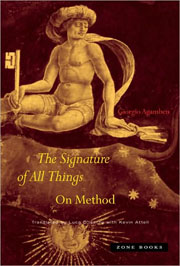 Since the publication of the English translation of The Coming Community in 1993, Giorgio Agamben’s philosophical work has held a prominent place in Anglo-American academic thought. Characterized by his immense subject range—spanning a field that moves from the political to the poetic—Agamben’s writings are above all dense affairs with complex conceptual turns condensed into tight sentences, often requiring several readings to penetrate their meaning. So it is no surprise that these qualities are on display in Agamben’s The Signature of All Things, a book devoted to working through some of Michel Foucault’s key methodological breakthroughs en route to laying out Agamben’s own conceptions of method. That such a text exposes some profound limitations of his own thought should probably not surprise us either.

The Signature of All Things is subdivided into three chapters, each inaugurated by the isolation and analysis of a specific concept, which serves a prelude to Agamben carrying out a broader analysis of this idea within the framework of Western philosophy. Chapter one, with its focus on the concept of “paradigm,” and chapter three, devoted to Foucault’s important theory of “archaeology,” both start explicitly with Foucault, while chapter two, begun with a reflection on Paracelsus, centers on a theory of “signatures.”

Notably, all three of these Foucauldian ideas are located primarily in The Archaeology of Knowledge andThe Order of Things, and these texts are the ones Agamben turns to the most to elaborate his arguments. This focus at first glance seems surprising, given both the greater scholarly interest in the past fifteen years in the “later” Foucault—the Foucault of governmentality, the dispersion of power across the social field, and the History of Sexuality series—and the weight Agamben places on this period of Foucault in his most influential book, Homo Sacer. Indeed, such an approach feels almost anachronistic at this point, a step back to the 1970s when these earlier works served to prompt a sea change within segments of almost every social science and humanities discipline. But there is a method to this selectiveness of Agamben, one that emerges explicitly in the final chapter, and serves to provide this text with the exigency for its methodological exploration.

Agamben isn’t overly concerned with arguing for the importance of Foucault’s methodology, or directly deconstructing rival methods, but rather with showing how it connects with some of his own theories. For example, the first chapter begins with a comparison between Foucault and Thomas Kuhn’s theory of paradigm. Quickly, though, both thinkers are mostly left behind, allowing Agamben to connect this theory to the thoughts of, among others, Aristotle, Kant, Plato, Heidegger, and Goethe, and in this process illustrate how the notion of a paradigm exhibits a close relationship to his ideas about analogy and singularity.

In this case, a paradigm defies accommodation with any dualist or binary manner of thinking—which Agamben feels lingers behind many problems in Western thought, like the rigid separation between subject and object or human and animal—and instead “replaces a dichotomous logic with a bipolar analogical model.” This alternate method of paradigmatic knowing has the further quality of being ultimately rooted in its ontological status, with the consequence that the “historicity of the paradigm lies neither in diachrony nor in synchrony but in a crossing of the two.” This final idea becomes a running motif in Agamben’s text, as he evinces considerable concern in each chapter toward a rethinking of the temporal investigation of concepts and objects—a concern that makes its most serious claims in the book’s final chapter.

Before proceeding, though, a quick note on the style of the text, which is unfortunately littered with distracting rhetorical gestures that give off an air of elitism. This happens on the very first page of the preface: Agamben begins by stating, “Anyone familiar with research in the human sciences knows that, contrary to common opinion . . .” and repeats that final phrase, “contrary to common opinion,” only a few lines later, after having just pointed out how the “astute reader” of his text will have the clarity of mind to “determine what in the three essays can be attributed to Foucault, to the author, or to both.” While these phrases attempt to serve alternately as ideological critique (“common opinion”) and a performance of the author’s knowledge (“anyone familiar with”), they have the effect of foreclosing other interpretations while simultaneously allowing Agamben to evade providing proof for these opinions.

And it is proof, notoriously such a difficult and elusive aspect of conceptual arguments, which is allowed to go begging in the style of the text. As is typical for Agamben, slender page or page and a half sections within a chapter dwell on a quotation or two from a thinker, only to be linked in subsequent sections to selections from other philosophers by Agamben’s considerable conceptual dexterity and poetically evocative writing. It is these last two qualities that end up carrying so much of the argumentative weight of the text, since Agamben will often produce tremendous claims out of a few citations, claims that often seem quite a stretch given his limited source material.

Another problematic aspect of this text, which brings us back to its philosophical claims, is its overall approach. By ranging from philosopher to philosopher, finding nuggets and traces in so many thinkers for his project, Agamben reconstructs an unending narrative of Western philosophy, a continuity of ideas that stretches back from ancient Greece to the present. This reconstructs a profoundly idealist version of the world and thought, one that severely limits historical change and the influence of material reality upon the shaping of thought itself. And this is why Agamben has to assert the ontological primacy of the paradigm in chapter one—because for him, in the last instance, there is a continuous being of thought that retains its shape throughout time.

Such an interpretation appears premature at best, or erroneous at worse, given the importance Agamben places in the final chapter on history, where he suggests the human sciences need to rethink “the very idea of an ontological anchoring, and thereby envisag[e] being as a field of essentially historical tensions.” This comes at the very end of an argument circling around two key positions—one, a critique of a historical method based on “origins” and, two, a passionate call for a return to a linguistic method centered on a structural (and culturally based) model as opposed to the currently hegemonic Chomskian generative grammar (and its basis in biology)—and both are seriously flawed.

On this latter score, while a more culturally based approach is ultimately more correct—and the suggestion of a return to structuralism also sheds light on why Agamben would mostly stick to some of Foucault’s earlier work, which worked in a creative tension with that intellectual movement—it points out a serious limitation in the type of historical ontology Agamben is arguing for. Such a return paints movements in academic methods in an overly voluntary fashion, as if method is a simple choice for scholars, and not influenced by broader economic, political, and social forces. This is not to discount the responsibility of individuals in their research, but the rise of more biologically driven theories in the human sciences probably has more to do with the rise of conservatism in the last thirty to forty years in North American and Western Europe than with the mere preference of academics.

This blindness to broader social forces is also related to a misplaced critique of history as a search for origins. Basing his argument on Nietzsche, and Foucault’s important essay “Nietzsche, Genealogy, History,” Agamben proceeds to attack this concept without offering any contemporary examples of this historical method in action. Indeed, to characterize the practice of history as a “search for origins,” especially in light of the significant changes in the discipline in past forty years (some directly inspired by Foucault), feels a bit hollow.

The result of displacing the study of history from origins to “effects,” as Agamben envisions, is a historicized ontology, which only raises more questions than it answers. For example, despite their cultural, economic, and geographic differences, is the historical ontology the same for a Sudanese peasant and a London stockbroker if they inhabit the same time frame? And is there a better paradigm of the use of historical ontology as a method than Martin Heidegger’s famous dramatization of the German people as fulfilling their destiny via the Third Reich?

In the end, Agamben’s approach leads to history becoming mystified into an endless circuit of ideas, where concepts always supersede actions and materiality, and the latter fail to alter and redefine the former. That such an approach continues to strike a chord with readers also seems symptomatic of the political and economic changes alluded to earlier—it is a perspective that suggests that “thinking more correctly” replaces all the dirty work of materiality.