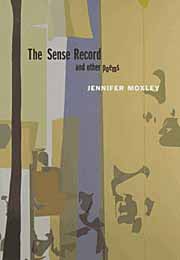 Although it doesn't engage in the coy cleverness and pranks pulled by many of her "emerging" poetic peers, Jennifer Moxley's second full-length collection, The Sense Record, is absolutely postmodern, evoking a world in which Eros appears outside a two-car garage. It's also a hard book, the way Henry James feels hard—one suspects that even the author might not be up to the task of dissecting her own curvilinear sentences. But the effort is worthwhile, because that altogether too-rare phenomenon is happening here: a radically new poetic voice.

I'd recommend that readers approach the collection through the title poem, the penultimate work in the book, in which the above-mentioned Eros makes an appearance. Like much of the other work here, "The Sense Record" is a carefully controlled blend of highly formal diction, diurnal minutiae, ruptured syntax, and epistemological queries into life, love and art, as in these lines:

Do I hold a sword or am I a ghost,
marking the tedium between
drunken midnight, wistful sunrise
blood-mouth metronome beats
between here and deep unconsciousness
a sea of little niggling tasks.

At once edgy and archaic, Moxley uses traditional meter and Romantic imagery to inform poems that ask urgent questions about class and community in the contemporary world. In the first poem, "Grain of the Cutaway Insight," the speaker wishes to connect with a loved one through poetry, but claims "My thoughts are too awkward, too erratic to rest / at ease in the beautiful iamb." Likewise, Moxley's wandering ideas seem far too restless to be confined to pretty formalism, and yet she relies on form, making it modern in ways that feel both natural and stylized. But philosophically, Moxley is no neo-formalist: in both her own poems and in the work she has published as an editor, she is fully committed to the avant-garde and its legacy, a stance that pervades The Sense Record even when she writes sonnets in perfect pentameter, like "Against Aubade":

Should morning's snubbed forsaken purpose come
in love's complacent orbit to relent
and to our bid for endless time succumb
could we believe ourselves the more content?

Her use of such craft is not ironic, but it does startle: by including the kinds of poems least expected to be published by the fiercely avant-garde Edge Books, Moxley invites the reader to question the nature of beauty, of limitations, and of the modern. And in doing so, she makes the poems in The Sense Record revelatory: the words are smoothed into classical shapes, only to highlight said shapes' syntactical and systematic ruptures. In many of the poems, Moxley seems to turn on herself, questioning her own epiphanies, and so the raw energy that results feels true to the content. It also serves to enliven some of the more academic-sounding verse; every time the poems flirt with being too girded or unemotional, Moxley imbues them with surprising evidence of a real life, American and specific. This happens in the love poem "Impervious to Starlight," which begins abstractly enough with

only to move, in the next stanza, to a "legend" in which

my father left his piñata profits
in the removable tray of the old strongbox,
destroying, off in the ideal ether,
his daily offerings to leisure,
and lining his restive patio life
with decrepit forms of remorse.

Although I am not always sure how to follow them, I have a great deal of respect for these kind of leaps, as well as for the sure-footed way Moxley is able to slip in and out of an almost apocryphal diction. Later, in "Impervious to Starlight," she invokes, during a kind of dream sequence, the advertising slogan "(but wait, there's more)" and then proceeds to use italics in an eerily Biblical manner:

we saw a long corridor,
of haunted lawn, there was a vessel
of pocked marble atop a pedestal,
out of which came a few fragrant heads,
red, fluttering paper leaves

Another characteristic of Moxley's work, one she shares with other interesting younger poets like D.A. Powell and Rachel Zucker, is a sort of backlash against the Language-influenced fragment: rather than cutting her lines into slivers, she extends them beyond their breaking point, creating a kind of "ultra line" that is as subversive-seeming as the fragment, but with a more fluid, nobler outcome. In "The Second Winter," she begins a thought "The na•ve occasion of that first winter / repeats like a charm of personal woe" and does not end it until seven lines later with "metamorphoses, which move off trace / unto design, replacing silhouettes / with more enduring forms of loveliness." The line, like the loveliness, endures.

In poems of immense confidence and scope, Moxley's voice surfaces as ambitious and original, at once deeply immersed in the past and utterly forward-looking. The Sense Record is a document of poetry on the brink.