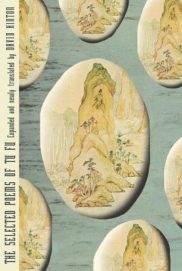 “The original is unfaithful to the translation,” Jorge Luis Borges once wrote, making light of the eternal debate about the reliability of translations. Certainly this thorny topic arises once again with The Selected Poems of Tu Fu, as David Hinton also published a previous Selected Poems of Tu Fu thirty-one years ago (New Directions, 1989). Hinton, a well-known translator of classical Chinese texts, has revised the poems in the earlier collection and included more; this is exciting news for poetry readers, though the new volume is not without some problems.

Tu Fu (712-770 CE) is considered one of the greatest poets of China. He lived during a period of cultural richness in the T’ang Dynasty, but he also witnessed a devastating civil war, and was often ill during this time of turbulence, suffering from asthma, malaria, and rheumatism. Despite social unrest, poor health, and dire poverty, however, the last decade of his life was when he wrote most of his poems. While many translators have tried their hand at rendering Tu Fu into English, a new attempt is always welcome given the challenges of translating Chinese (no articles or pronouns, for example). Hinton certainly brings years of expertise to the task, having also translated the I Ching and Tao Te Ching, as well as works by Chuang Tzu, Confucious, Mencius, Li Po, and so many others. He recently added to his voluminous oeuvre Awakened Cosmos: The Mind of Classical Chinese Poetry (Shambhala, 2019), where he studies in depth nineteen poems of Tu Fu.

One of the most striking aspects of the new Selected is Hinton’s belief that Tu Fu was deeply influenced by Taoist/Ch’an (Zen) Buddhism. These teachings gave Tu Fu the perspective, in Hinton’s words, of “the empirical Cosmos as a single living tissue that is inexplicably generative.” He even refers to Tu Fu as a Taoist/Ch’an “adept,” which contrasts with his previous notion of Tu Fu as a poet steeped in a Confucian worldview that valued service and ethics. While Hinton may be correct about the influence of Taoist/Ch’an Buddhism on Tu Fu, unfortunately his use of philosophical terminology often feels imposed upon the poems. Take the opening line of “Yin-Dark Again”: “Dark-enigma winter bleeds through dark-enigma’s yin-dark / frontiers.” In Hinton’s notes, he explains that “dark-enigma is functionally equivalent to Absence—the generative, ontological tissue from which the ten thousand things spring—but Absence before it is named.” While it’s helpful to have this mysterious term defined, it would be even better if the translator had found a way to make the unwieldy term function in the poem itself, rather than as a philosophical concept that sends the reader to the back of the book for a rather dense explication.

Other problems in this translation also arise. As mentioned, there are no articles in the Chinese, so it must be tempting for a translator to avoid them altogether. But this solution isn’t ideal, as can be seen in this four-line “Cut-Short Poem”:

The missing articles, for some readers, will have the whiff of an Orientalist impulse to use broken English in an attempt to sound like a non-native speaker. To say “The river sweeps moonlight” may sound more prosaic, but it avoids inadvertent stereotyping.

Some readers will also feel confused by Hinton’s literal translations of place names. For example, the city of Ch’ang-an, now called Xian, in Hinton’s new translation becomes “Peace-Perpetua,” and Chengdu becomes “Altar-Whole City.” While these literal translations perhaps sound more poetic, they make the poems feel unlocated. In his 1989 Selected, Hinton used the transliterated names of towns in the poems, as when he opens “Moonlit Night” with the line “Tonight at Fu-chou.” Contrast this with his revised translation of the same line: “Tonight at Deer-Altar.” The new version sounds like the location of a religious rite, rather than a city.

As Tu Fu has been much translated, some readers may want to compare Hinton’s new translations with versions by others as well. Here is Hinton’s “Thoughts Brimful: Cut-Short Poems,” number 9, in its entirety:

Delicate willows swaying outside my door—slender,
graceful as a girl’s waist at fifteen: who was it saying

Just another morning, same as ever? That wild wind
broke them down: the longest, most elegant branches.

And here is Kenneth Rexroth’s translation of the same poem, which he entitles “The Willow,” in One Hundred Poems from the Chinese (New Directions, 1971):

My neighbor’s willow sways its frail
Branches, graceful as a girl of
Fifteen. I am sad because this
Morning the violent
Wind broke its longest bough.

Rexroth’s version offers a clearer poem, though he takes the liberty of adding “I am sad” and does not include the “Who was it” question Hinton does. Still, Rexroth created a poem in English that has focus and grace, which—however difficult—should be the translator’s aim.

Hinton is at his best when he avoids philosophical terminology and provides Tu Fu’s voice and sensory detail, as seen in “Returning Late”:

Past midnight, eluding tigers on the road, I return
home in mountain darkness. Family asleep inside,

I watch the Northern Dipper drift low to the river,
and Venus lofting huge into empty space, radiant.

Holding a candle in the courtyard, I call for more
light. A gibbon in the gorge, startled, shrieks once.

Old and tired, my hair white, I dance and sing out:
goosefoot cane, no sleep . . . Catch me if you can!

Though some might argue that the phrase “goosefoot cane, no sleep” should come before “I dance and sing out,” the poem stays grounded in the incident and the emotion. Tu Fu’s sense of playful foolishness shines through.

Perhaps it was poverty and bad health that made Tu Fu feel so vulnerable and so empathetic in his poems. He speaks not as a scholar, but as one who has witnessed the consequences of war on his fellow citizens. The poem “Asking Again” shows his awareness of the cost of war even on those far from battle:

Couldn’t we just let her filch dates from the garden?
She’s a neighbor, childless and without food, alone:

only desperation would bring her to this. We should
treat her like family. It will ease her fear and shame.

She knows us now, but strangers from far away still
frighten her. A fence would only make things worse.

The resonance of the line “A fence would only makes things worse” shows readers how a poem written over a thousand years ago still speaks to us today. Tu Fu’s vulnerability is even more touching in the poems about his family, as seen in the closing lines of “Hundred Worries Gathering Chant”:

and when I return home, everything’s the same as ever:
cupboards empty, old wife sharing the look on my face.

Silly kids, still ignorant of the ritual esteem due a father:
angry, screaming at the kitchen door, they demand food.

Over and over, it’s Tu Fu’s humanity and humility that make him worthy of the attention he continues to attract from generations of translators and readers. The new Selected only confirms this. Even with its problems, Hinton’s book deserves wide readership, as Tu Fu’s poetry offers so much: insight into a historical period, into a prominent nation and culture, and, most of all, into the human psyche. One may wonder, though, if the poet’s “Catch me if you can!” doesn’t stand as a call to future translators of his work. While Hinton’s new Selected is a cause for celebration, let’s hope that following translators bring their craft to give us yet new versions of the poetry of Tu Fu.