Henry Miller and How He Got That Way
Katy Masuga
Edinburgh University Press ($59.99)

In his essay “Writers Lost In The Distance,” Roberto Bolaño describes “remembering the writers who were important to us in our youth and who today have fallen into a kind of oblivion . . . We thought, of course, of Henry Miller.” Katy Masuga attempts to rescue Miller from oblivion with her critical studies The Secret Violence Of Henry Miller and Henry Miller And How He Got That Way. 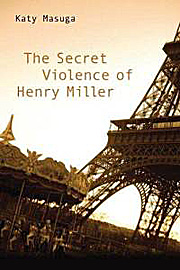 One of Masuga’s fundamental points in The Secret Violence is that “writing can only ever grapple at a truth that is the manifestation of a collection of subjective experiences, or, rather, the expression of subjective experiences, which are experiences that become forced and into a collection that becomes the book . . . Order is not made through language, as nothing is actually made through language in a concrete and final sense.”

Miller addresses this notion in a passage from Tropic Of Capricorn: “I must have the ability and the patience to formulate what is not contained in the language of our time, for what is now intelligible is meaningless. My eyes are useless, for they render back only the image of the known.”

Masuga, looking through the lens of Maurice Blanchot, responds: “if writing is defining what is unknown . . . it must always leave the unknown to be unknown, even though its purpose is the attempt to uncover and to disclose that unknown.”

Why, then, should one read these books that attempt to make “known” various “unknown” aspects of Miller’s writing? Masuga might refer the reader to an earlier passage in the book where she explores Miller’s idea that “this was the business of authorship, as I then conceived it. Make mud puddles, if necessary, but see to it that they reflect the galactic varnish.” In response to Miller and addressing the reader:

The galaxy is the unknown world as we project it before ourselves, despite the fact that its varnish is evidence of a deliberate finishing on a stupendous scale. We do not see its transparency, however, but the grandeur of the galaxy only as reflected in the mud puddles we make, and yet we mystify it through that reflected presence. We feel incapable of ever seeing the surface of the galaxy: how it shines, how it is already finished (by us). We come to imagine it as impenetrable, when in fact it is created—and subsequently easily accessible—through the activity of mud puddle-making: through the intellect, which is language and, hence, is the act of writing. Language, particularly writing itself, is the tool we create for ourselves as intellectualizing beings to understand the mysteries that our own intellectualizing has created. 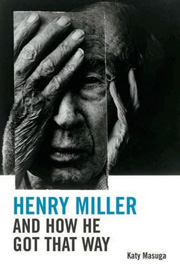 Masuga makes such heady stuff interesting through extensive sampling of examples and sources to create thick mash-up layers of theory, language, influence, and intertextuality that form the analytical basis for both volumes. A brief section of Henry Miller And How He Got That Way serves as an excellent example of her technique.

In response to Miller’s statement that, “long before I read Wittgenstein’s Tractatus Logico-Philosophicus I was composing music to it, in the key of sassafras,” Masuga brings Proust, Cezanne, Bosch, Chagall, Matisse, Baudelaire, Rimbaud, Carroll, Wittgenstein, synesthesia, word play, and language games into the proceedings to illustrate that Miller, “as usual, is engaging in multiple forms of intertextuality” and “literary correspondence that can transcend space and time” between himself and his ancestral authors.

Masuga explores four forms of intertextuality in Henry Miller And How He Got That Way: “Miller’s direct allusions to his influences”; “styles that are unconsciously borrowed”; “reverse influence . . . the manner in which the manifestation of the writer of influence in Miller’s work has perhaps affected a new reception of that figure of influence in subsequent criticism;” and “with Miller presenting the writer of influence as a figure in the text, occasionally even as a character.” Masuga selects Miller’s ancestral authors Walt Whitman, Fyodor Dostoyevsky, Lewis Carroll, Arthur Rimbaud, Marcel Proust, and D.H. Lawrence as the central figures for the book’s explorations of these four forms.

The Secret Violence Of Henry Miller is the more spaciously-written and linear book of the two, though not as much referential fun. Masuga’s goal here is to “suggest a new way of reading Miller that is alert to the aggressively writerly and self-conscious form of his work.” To accomplish this, she’s divided the book into chapters that explore categorization of Miller’s work by others, a study by Deleuze and Guattani on “minor literature,” metaphor, Miller’s descriptions of objects and places, his use of motion, time, and space, and the presence of visual and literary arts in Miller’s work.

Where some of Miller’s ideas and attitudes seem handcuffed to the times in which he lived, Masuga aims toward the future of critical theory. And while she succeeds in achieving her goals for both books, it’s hard to see these efforts sparking a Henry Miller renaissance. It’s more likely that readers will want to read more Masuga, but who knows? As Roberto Bolaño points out:

The explanation for this ebb of writers . . . is very simple. Just as love moves according to a mechanism like the sea’s, as the Nicaraguan poet Martinez Rivas puts it, so too do writers move, and one day they appear and then they disappear and then maybe they appear again. And if they don’t, it really doesn’t matter so much, because in some secret way, they’re us now.