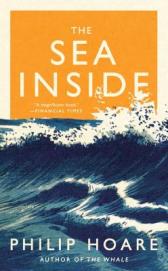 Many people feel beckoned by the ocean; there is something in the sea air that feels magical and poetic. However, because of the arduous nature of seafaring life, many people prefer to experience it via armchair travel with documentaries and books. With The Sea Inside, British author Philip Hoare takes the reader on such a journey.

The author is captivated by the ocean, and is a subscriber to the idea that human beings evolved alongside the sea:

The sea sustains and threatens us, but it is also where we came from. Some consider that the relationship is closer than we think. Callum Roberts, among other scientists, has noted that the ratio of subcutaneous fat in humans is ten times that of other primates, nearer to that of a fin whale. From an evolutionary point of view, such human blubber would make little sense for a land hunter, but it would be eminently useful for an ‘aquatic ape’ which developed by the sea.

The science may not be so great here, but it’s a very poetic concept. Although the book has an index, it is more literary than scholarly—the writing is reverential (if occasionally opaque), and addresses themes such as the metaphorical seas of human relations.

The Sea Inside is filled with references to British people, places, and events, and readers unfamiliar with the culture may not get as much from the book. As an island nation, Britain is home to some fascinating sea lore, and Hoare relates these tales so colorfully that the reader might feel seasick. In describing the ocean and its saga, Hoare addresses the spiritual and emotional as well as the scientific and historical:

. . . The Pacific is by no means a landless, uninhabited expanse. It is studded with twenty-five thousand islands, large and small, each with its own stories, of people, and animals. Their narratives crisscross the ocean in an embroidered web, drawn together in invisible lines of connection from shore to island to sea, transversed in ancient feats of navigation and migration that put our modern, computer-assisted efforts to shame. Here the remotest journeys ended; and here many began, too.

Hoare’s self-deprecating humor also keeps the book from being too grandiose, such as this passage in which he attempts to play like a dolphin:

But my body declines to act like a dolphin, and there’s as much seawater up my nose as there threatens to be in my lungs. I feel like a circus animal myself; and although the dolphins come to me of their own accord, I can’t help feeling they’d be better left alone. Exhausted, I haul myself up over the boat’s side. Sometimes it’s better to watch than to take part.

The account of the voyage is wonderful and profound, and the reader may be sad at the end of the book, when the author settles back into the familiar rather than the wild. Yet for some, this might be all the more reason to read it. A stirring book about both outer and inner depths, The Sea Inside shows that humans are intrinsically connected with the ocean.