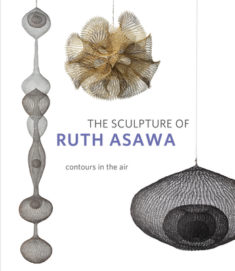 Ruth Asawa’s life and work sets the consummate standard for being an engaged public artist in a city. Establishing her household in San Francisco was a key development in her “remarkable life journey” alongside her “groundbreaking sculptures” and, as Daniell Cornell remarks in the newly revised The Sculpture of Ruth Asawa: Contours in the Air, she remains “beloved by San Franciscans for her work, community projects, and tireless advocacy for public arts education.” This robust gathering of essays, including several newly added to this edition, all fully illustrated, along with color reproductions of works in the original 2006 exhibition, is a definitive collection of material on and about the artist.

Many of Asawa’s fountains dot San Francisco, but her wire sculptures rank among her most well recognized works; since 2005 a variety of them have been on permanent display in the lobby of the De Young Museum’s Hamon Observation Tower in Golden Gate Park, where they are suspended at varying heights about the concrete space. As Cornell describes, to enter the room is to be vividly confronted by “the relationship between transparency and shadow, a seemingly paradoxical play that turns negative space into positive line and displaces forms to the floors, walls, and ceiling.”

In front of the De Young, surrounding the walkways and fountains of the large musical concourse, is an abundant grove of pollarded (pruned) plane trees. These are featured in lithographs Asawa made in 1965 as a fellow at the Tamarind Lithography Workshop in Los Angeles. Colleen Terry wagers this period has relevance with the rest of Asawa’s works, even if lithography never became a central feature of her art. Terry sees “the conceptual underpinnings” of Asawa’s wire sculptures in the lithographic works and describes how they are “informed by the primary principles she had learned nearly two decades earlier at Black Mountain College.” Asawa’s time at the experimental arts mecca in rural North Carolina in the late 1940s—especially “her enduring commitment” to the teaching of Josef Albers, her primary instructor at the college—played an integral role in setting the course of her life.

Her experiences at Black Mountain led her to thrive in San Francisco professionally as an artist as well as personally as a Japanese American woman raising a racially mixed family. It was there she met her husband Albert Lanier, an architecture student, whose future employment with a San Francisco architectural firm, along with local ties to several fellow Black Mountain alumni, brought them to the city in 1949 and established the financial footing for their household. From the beginning of their life together, Lanier and Asawa managed to negotiate balancing family life with civic participation centered on artistic practice. Cornell shares how Asawa later “claimed that the most valuable thing about her education at Black Mountain College was that it was not about learning a subject but about learning to think.” Making their life together work wasn’t an easy achievement; it took thoughtfulness combined with steadfast determination.

Mixed race marriages were more than just irregular at the time. As contributor Mary Emma Harris reminds us, “When they became engaged in the summer of 1948, they could not marry in California, and it was only later that fall that the Supreme Court of California in Pérez v. Sharp struck down prohibiting interracial marriage.” Harris also relates that for both sets of parents, the young couple’s life partnership posed serious hazards to their future in the face of racial prejudice. She cites Asawa’s description in a letter to her future in-laws about how her own parents shared their apprehension, yet “though it is a sadness to them, they do not say ‘no,’ nor do they exclude me from the family for what we are about to do.”

Their marriage did have the support of Black Mountain faculty. Josef Albers, for instance, told Asawa that she “would make a good mother,” but not without also being sure to tell Lanier “Don’t ever let her stop her work.” In Asawa’s words, “he advised us very well. We got both things covered.” In addition, Asawa’s wedding ring was designed by faculty member Buckminster Fuller: a black stone encased in “a silver setting based on the tetrahedron.” For the artist-bride the sets of overlapping “tetrahedron” shape of bars on the ring were noteworthy because “Asawa saw in it the three A’s in Asawa.”

Harris’s essay on Black Mountain also includes a humorous moment regarding notes Asawa took during a Charles Olson class discussion of poet Ezra Pound. In addition to some “doodling,” which provided “an important means of exploring design motifs, into which she often integrated the subject matter being discussed” (in this case she has sketched an interlocking series of lines raying out in a pyramid of antenna-like branches beside handwritten comments such as “Art Agent Social Change Catalyst”), Asawa has scrawled “Vaudcism” above “Pound,” penciled in an enlarged Gothic script. No doubt this was a mishearing of the Worcester-born Olson’s working-class brogue pronunciation of “Vorticism,” the 1914 art movement Pound was involved with alongside Wyndham Lewis.

Black Mountain also showed Asawa’s capability for assuming roles of organizational responsibility, as when “students chose Asawa to be student moderator. As such, she was the student representative on the board of fellows and a member of the faculty (without teaching responsibility or financial liability). She had a vote in all matters.” This tendency of hers did have its downside, as Lanier described in a letter to his parents: “Ruth has been there too long . . . become too much the servant, too indispensable to the place and the people.” Yet this was a role that she also found continually useful.

As she raised her own family in San Francisco, Asawa embedded a strong civic relationship within her art. This was especially true in regard to arts education in the public schools, culminating most prominently in the founding of the Ruth Asawa San Francisco School of The Arts, an audition-based public school alternative. As Asawa recalled when reflecting on her time at Black Mountain, “we were in a way inventing things, but at the same time we were exposed to a lot of things, to students who were not accepted . . . we felt free.” Her marriage was a natural continuation of the freedom found at the college where she laid the groundwork for the practical-minded yet committedly artistic San Francisco household that became the core of her art and life.