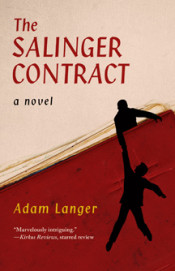 Adam Langer probably could not have published this absurdist literary thriller if J. D. Salinger were still alive; the late novelist was well known for employing lawyers to chase off everyone from sycophants to fans. His concoction follows an early middle-aged writer named Adam Langer who doesn’t know who his father is, only that he had once picked up a cocktail waitress in Chicago after a night of drinking and impregnated her. In the novel, Adam is married to Sabine, a European-born and a professor at Indiana University. He’s published one novel so far when the story begins.

An acquaintance and fellow writer named Conner Joyce enlists Adam as a confidant of sorts, telling him a wild story about a wealthy older man named Dex Dunford who contracts writers to pen a novel that only he will read. He pays very well, but the writer is to say nothing to anyone. Here Langer’s plot gets murky, as Conner is not the first writer to be ensnared by Dex and his henchman, Pavel, who under another name was one of the well-paid but captive writers; in the world of the novel so were such figures as Norman Mailer, John Updike, and of course, J. D. Salinger.

Langer’s pointedly satirical take on the world of publishing and the obsessions of the literati is not without its charms, even if the unlikelier aspects of the plot are never quite explained. His breezy style is easy enough to read, although his frequent lapses into banalities and clichés—“over the top; “bullshit” as a verb; “didn’t give a crap”—are disedifying. Still, he knows how to tell a story and moves his characters along in serviceable prose:

The train arrived. Its doors slid open and Conner followed the men into a mostly empty car. Conner sat in a window seat, Dex sat next to him, and Pavel on the bench behind as the train moved forward, accelerating out of the tunnel, following the eastward path of Interstate 90 toward the shimmering lights of downtown Chicago. Conner had seen these lights only once before, but this time they looked sinister; he felt drawn into the darkness that surrounded them.

In the end Dex is reconciled to Adam Langer when the latter visits Salinger’s gravesite in New Hampshire. While the book’s title is a stretch—designed, no doubt, to catch a few eyeballs here and there—The Salinger Contract is fast-moving, entertaining, and offers several hints that the author has the potential to write a more substantive book.