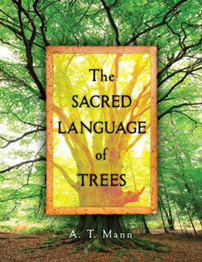 I’ve been giving a lot of thought to trees lately, especially now that we’re nearing the end of autumn and the leaves have turned and are falling to the ground. It’s a subject that has always fascinated poets. I’m reminded of Robert Lowell’s precise and focused imagery, embedded somewhere in hisNotebooks: “twilight floating through the manes of trees.” Or the picture postcard of ephemeral reality that T.S. Eliot captured in: “The fog is in the fir trees” (The Dry Salvages). For his part, Robert Creeley once explained that trees are “the resonance of experience.”

It’s that time of year when nature seems to fold in on itself and go into a deep sleep, a season of tranquility. And it is this sense of tranquility that envelops the reader of A. T. Mann’s new book,The Sacred Language of Trees, an anecdotal history of the myths, cults, and religions involving trees from earliest times to the present.

Mann’s 1978 breakthrough book, The Round Art: The Astrology of Time and Space, was chockfull of esoterica and rich in varied personalities, both famous and obscure—all with their charts facing them in full view. Richly infused with many surprises, it would forever change the way astrology charts are looked at. (Sadly, it is out of print.) Thirty-five years and a dozen books later, Mann is still very much a man of letters and ideas; in his new book, he communicates in diamond-cut prose what trees are telling us—and what they are saying is both loving and frightful. Their language is spiritual. There are no subtitles here.

The Sacred Language of Trees is not so much a departure from where Mann first began, but a continuation of those discoveries that enchanted him along the way. It is structured in storied chapters or reflections: “Chaldean, Babylonian, and Assyrian Tree Myths,” “Hebrew Tree Symbolism,” “The Christian Story of the Paradise Trees of Eden,” and “Mesoamerian and Native American Trees” illustrate the sheer breadth of the territory that this short book covers.

Mann weaves anecdotes and stories, both factual and personal, in concise and simple ways without losing any of their richness and depth; his stylistic approach is unique and fluid. He’s not so much letting you in on a secret, but remains entirely open to sharing what he knows with his readers. Here’s an example of the author at his most succinct:

We must realize that human intervention has a measurable impact upon the natural world, and that (as studies have shown) if we don’t change our habits of consumption, we could easily bankrupt our natural resources in the foreseeable future.

A similar lament for the natural world has been sung through the ages by important and worldly individuals. Take this remarkable parallel in T.S. Eliot’s The Idea of a Christian Society, in which the poet voiced his sympathies and concerns about the planet’s fate in 1939:

We are being made aware that the organization of society on the principle of private profit, as well as public destruction, is leading both to the deformation of humanity by unregulated industrialism, and to the exhaustion of natural resources, and that a good deal of our material progress is a progress for which succeeding generations may have to pay dearly.

Mann is among these “succeeding generations,” as are we all. And indeed, evidence of this cost abounds. Take the disappearance of many species of birds, occurring more so now than at any other time. Trees are birds’ habitat. Without them, birds have nowhere to fly to, nowhere to perch, and nowhere to nest.

It seems a shame that warnings of this nature must persist throughout history, to be repeated again and again. A first instance of any tree from recorded history comes from the Bible, when Eve plucks an apple from the tree of knowledge. In this instance, the apple tree becomes sacred for its warning—only the first tree to speak to us in a language we would do well to heed.