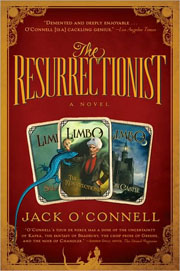 Jack O'Connell’s multi-layered novel The Resurrectionist is billed as everything from detective fiction to fantasy—primarily because it defies easy categorization. While “speculative noir” might be a little nearer the mark, a handy label is beside the point: O’Connell doesn’t just blur genres with this quasi-gothic tale set in America’s rust belt, he also obliterates the lines between the realities generated by spacetime, drugs, imagination, dream, and even narrative itself.

The frame story centers on a pharmacist named Sweeney who has become obsessed with finding a way of pulling his seven-year-old son, Danny, out of a coma. Danny is being treated at the Peck Clinic, "a sandstone monster on fifty acres of private land near Quinsigamond's western border.” Dr. Peck has documented two “arousals” and believes Danny is a good candidate for a third.

Running parallel to the main narrative, and occasionally intersecting, is a fantastical tale of circus freaks recounted in Limbo, the comic book series Danny was reading before his consciousness high-dived into the void. There are any number of points of correspondence between the fictional world of Limbo and the real one, such as this nice touch of mirror imaging: while a freak known as the Chicken Boy is searching for his father, a father (Sweeney) is desperate to make contact with his son.

The dialogue flows naturally, the characters are well drawn, and the writing generally avoids being overwrought—although it often aspires to the lyrical, as exemplified by this description of Quinsigamond: “They rolled at an even speed past the foundries and chemical plants, past acres of ghostly housing projects and antique tenements long gone dark. Eventually, they cut into the city proper and made for downtown, a Mardi Gras in perpetual decay, this crowded hive of clubs and bars, noodle dens and arcades, strip joints and chapels of the apocalypse, all of them announced in red and blue neon.”

Perhaps O’Connell’s most impressive achievement is his portrayal of the Abominations, a nomadic biker gang whose leader improbably claims to know how Sweeney can connect with his son; eerily enough,Limbo is one of the pieces that fits into the puzzle. Like Milton’s Satan, the troupe [exerts] a strange magnetism—it’s hard not to be drawn to them no matter what horrors they perpetrate. Their hangout is the Harmony, an abandoned prosthetics factory, which stands in odd opposition to the Peck Clinic, a “Romanesque mausoleum.”

Dr. Peck and the Abominations both have abiding interests in the comatose patients at the Clinic, and oddly enough they seem to share certain perspectives. Peck, for example, "understood that the universe, the fabric of reality, was composed of nothing more than particles of longing, a kind of quantum desire for absolute connection. . . . He knew that every arousal he achieved would bring him closer to answers that had more to do with the nature of consciousness than of coma." One of the bikers, on the other hand, tells Sweeney “we’re headed inside, right? When all’s said and done, that’s where the real cosmos is, you know?” Where they differ radically is in their approaches, which catch Sweeney and Danny in between like hammer and anvil—except that ultimately, Sweeney has to choose sides.

The only shortfall in this novel is that for all the talk of getting underneath the surface and throwing a flashlight beam on the submerged architecture of the mind, hardly more than a cornice here or a collapsed arch there surfaces. Be that as it may, The Resurrectionist is a dark funhouse of a book that in the end is also a call for redemption and forgiveness through love and story.