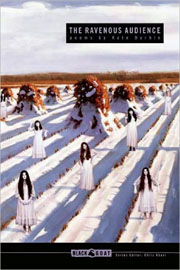 Kate Durbin’s iconophilic, starving first book proclaims its poetics in its very title: Ravenous Audience. This is a poetics of a Plath-influenced engagement with the “peanut-crunching crowd.” If Judy Grahn’s famous “I’ve Come to Claim the Body of Marilyn Monroe” rewrites Plath’s “Lady Lazarus” as a grave-robbing, revenge fantasy about Monroe—picking up on the violent, B-movie element of Plath’s poem—Durbin lets both Plath and Monroe into her spectacle: both “celebrities” are invoked for their violence and their spectacular assemblages.

In many ways the book displays the aesthetics of the recent trend (detrimental connotations intended, revoked, and repossessed) of “the gurlesque,” which Lara Glenum has described as “deploying an aesthetics of spectacle” and using “hyperbole” to display the performativity of gender. It is decidedly not a poetics of the “distanced” critical reader, but a poetics of possession. In her blog manifesto, “A Teenage Girl Speaks As A Melodramatic, Hysterical Demon,” Durbin invokes this B-movie poetics: “Say nothing is more melodramatic—and pisses off Mom and Dad more—than claiming to be possessed by the Devil himself.”

The great theorist of this kind of aesthetic is, of course, Antonin Artaud, who in his “theater of cruelty” manifestoes called for a spectacular theater that acted like a plague, generating the kind of energy that causes people in plague-torn cities to loot and destroy houses. Unlike Artaud, however, Durbin invokes the kitschy and the paraliterary in order to turn this possession into a feminist critique of gender.

Except “critique” is the wrong word here, implying as it does a sovereign agent capable of evaluating and uncovering the truth—enlightenment illusions that linger in contemporary American poetry and art. No, this poetry doesn’t criticize; it is possessed by, and possesses, other texts, other bodies, femininity itself, poetry itself. Unlike the “critique” of language poetry, this is a poetics of movement. It does not imagine the world a static place that can be analyzed, criticized, resisted. It moves and surges, coupling and uncoupling with new codes, personas, texts, in the process generating strange hybrids and monstrosities.

Durbin’s poetry often invokes the quiet lyric of the workshop poetics, but it consumes and blows it up. For example, “Gretel and the Witch” consists of a retelling of a fairytale in clean couplets, complete with the kind of italicized dialogue that is quite common in a workshop lyric. But the content is anything but measured, as Gretel cannibalizes her brother, leaving “This small skeleton beside, also asleep, / Bees tenderly sucking the skull’s final juices.” The poem possesses and is possessed by not only the fairytale but the lyric as well. And, tellingly, the possession results in a “bad fit,” a poem that does not give us the feeling of an autonomous artwork, a B-movie poem.

This sense of possession—or even parasitism—becomes more obvious in a series based on Catherine Breillat’s movies. For example, in “36 Fillette,” Durbin cuts-and-pastes the often awkward dialogue from the Breillat movie of that title (notably not translated, “virgin,” absent, a hole):

what does she want isn’t she too young for a disco? A car is like a chick you soon get tired of it you discover the flaws too late what’s the problem I didn’t look at you enough? how old are you?

Much like in August Strindberg’s brief play “Stronger,” it is the one who does not talk, the quiet “filette,” the woman, who grows huge and powerful in her absence of speech. She is the black hole in the poem.

For an understanding of how Durbin moves through these movies, fairytales, and genres/media like clothes, we might turn to John Kelsey’s recent article in Artforum, “Riches to Rags,” about the design duo Rodarte. Kelsey says that Rodarte’s violently gothic and “Frankensteinian” clothes are specifically “American,” not European, especially

in all the improvisatory ways it de- and recodes a culture that is already impure and blended with crisis. If the typically European strategy is to construct avant-garde gestures around the inversion of established, legible codes (aristocratic or bourgeois), an American vernacular is corrupt in advance, the border between high and low long since dissolved. Here, it is less about turning the queen on her head than a matter of tracking mutations in the desert, where celebrity and nothingness have always shared a strangely productive cohabitation. Rodarte are perhaps closer in spirit to Roger Corman or Wes Craven than to the top men of haute couture.

It is not surprising that we find an extensive interest in fashion and clothes and accessories in Durbin’s gurlesque horror show. The Marilyn Monroe fantasia ends, much like Plath’s (the teeth, the lampshades) with a heap of relics, or “leftovers”: “a black embroidered handbag a pearlescent Bakelite clutch a jewel-encrusted evening bag with a chain strap a Lucite handbag,” etc. One could say that Durbin, in Gilles Deleuze and Felix Guattari’s terms, minoritizes fashion: just as Franz Kafka exaggerated the features of Prague-German to create a foreign language within German, Durbin exaggerates fashion, femininity, to find a foreign, gothic woman within that femininity.

This poetry and its larger gurlesque trash aesthetic are finding quite a bit of opposition from a literary culture still invested in the idea of poetry as high art (whether quietist, well-made, authentic art, or experimental, distancing art, both defined against mass culture and kitsch). But most likely it will also find its stunt-double readers tracking its mutations in the desert.