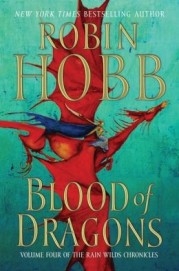 Hobb, who also writes under the name of Megan Lindholm, is a prolific author known for her rich world-building, evident here in the evocative, detailed descriptions of the plants and animals that her characters encounter.

The Rain Wilds Chronicles document a quest with world-changing consequences, but Hobb keeps the narrative focus on her characters. There are no pre-ordained outcomes or messianic Luke Skywalkers here, only people with their own problems to solve and their own journeys to adulthood and/or freedom to complete. Her series does include dragons who use telepathy to communicate with certain special people, but if the reader is expecting the beneficent, empathy-driven dragons of Anne McCaffrey's Pern books or the childlike, humorous dragons of Naomi Novik's Temeraire series, then Hobb's dragons, who are alien in every sense of the word, will be a welcome surprise.

Hobb has already set two other trilogies in the world where the Rain Wilds Chronicles takes place. However, she provides enough detail and backstory so that reading the earlier books is not necessary. Rain Wilds refers to the vast swampy basin surrounding a slow-moving river full of acidic water, on which only Traders travel between cities located far apart from each other (most communication between cities is through carrier pigeons). There is little arable land; most of the Rain Wilders live in trees. Vague legends of an earlier, better time are articles of faith to the Rain Wilders, and are physically manifest in the magical relics that occasionally surface in trade. The relics are said to originate in Kelsingra, the legendary, lost city of dragons and their Keepers, known as Elderlings, immortal humans who tend to and partner the dragons. 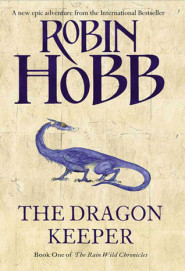 As the books open, only one dragon, Tintaglia, is left alive. In a desperate attempt to bring more dragons into the world, she has herded their proto-forms, serpents, from the sea into the Rain Wilds River, and then has arranged for a guard for them as they hibernate in cocoons. But the acid river water and exhaustion from the journey take their toll on the hibernating serpents; they hatch too early, before they are fully formed. Dragons are supposed to be born with the memories of their bloodline, which serves to make them fully developed personalities and self-sufficient from birth. These hatchlings have only vaguely formed memories to aid them. Tintaglia disappears before they hatch; her Elderlings, Malta and Reyn Khuprus and Malta's brother Seldin Vestrit, are left behind to watch over the cocoons.

The official guardians of the cocoons are the council of the city of Cassarick, who struck a deal with Tintaglia. In exchange for fostering the young dragons, they would in turn receive protection from the warlike inhabitants of Chalced, a city far south that nevertheless presents real danger to the Rain Wilds inhabitants. Faced instead with Tintaglia's mysterious absence and malformed dragons who cannot fly or even hunt for themselves, Malta and Reyn Khuprus and the council make a drastic decision: hire Keepers for the dragons and send them all north to re-found Kelsingra.

The first volume, Dragon Keeper, sets up the world and the characters whose adventures Hobb will be chronicling. One of the main characters is Thymara, an 11-year-old girl who has been marked physically by the Rain Wilds “magic”—an invisible power that alters some humans, leaving them with claws, scales, or other mutations. Thymara's mother is ashamed of her daughter's appearance and keeps her isolated and fully aware of her “inferiority.” Thymara becomes a hunter, preferring the chase to the company of most other people. When she is offered the chance to become a Dragon Keeper, she seizes it, backed by her father and her friend Tats, a young boy who is a former slave. 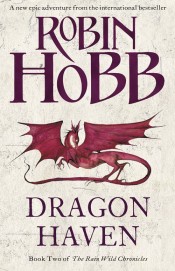 Another member of the trek north is Alise Kincarrion Finbok, a scholar forced into a conventional marriage by her Trader family. Eager to escape from her cruel husband Hest and explore the realities behind the faded histories she labors over, Alise uses what little power she possesses to leave her unfulfilling married life behind. Accompanying her is Sedric, Alise's childhood friend and, unknown to her, also her husband's lover, sent along to keep an eye on her. Together with the young Keepers, they travel on the liveship Tarman, captained by Leftrin and his crew.

A liveship is just that: a living ship, with a figurehead that can see and communicate with its crew. The aliveness originates in the materials from which the ship is constructed: wizardwood (the cocoon of a dragon). By adding more wizardwood to Tarman, Leftrin gives his ship even more independence and personality, but at the same time, he opens himself to blackmail: using a dragon's cocoon, even with a dead dragon inside, is taboo. Since liveships are the only ships that can withstand the acid water of the Rain Wilds River, Leftrin, eager to make a better life for himself and his crew, is willing to take the risk.

Hobb's description of the journey to Kelsingra (volumes two and three) mainly documents the struggles between the dragons and their Keepers to adapt to the changes that adolescence and magic bring to their bodies and minds. The Keepers and Alise discover that constant contact with the dragons, the act of being “chosen,” is what creates Elderlings: immortals with some of the physical characteristics of dragons. As they continue the slow trip to Kelsingra, Chalced and its ailing, insane Duke are a constant threat; he is obsessed with consuming dragon blood and flesh in order to stay alive, and his agents have infiltrated the travelers on board the Tarman.

As the final book, Blood of Dragons, opens, Kelsingra has been achieved. However, the dragons are too weak or malformed to fly and the city lies across a vast body of water too far for the dragons to swim. Leftrin returns to Cassarick for supplies and to pick up the payment owed the expedition's members. There he meets with Reyn and Malta Khuprus, who persuade him to let them travel with him to Kelsingra; Malta's baby is dying and needs to be healed by a dragon. 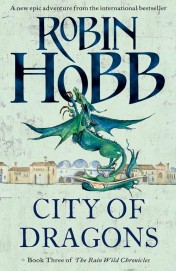 Now that the news of Kelsingra’s discovery is out, greedy Traders, including Alise's husband Hest, are ready to travel there themselves and plunder the city; some have allied themselves with agents from Chalced. In Chalced, Seldrin Vestrit the Elderling sits in prison, waiting for the Duke to feed on him if he can't get the dragon's blood he really wants. Tintaglia reappears, bringing with her an ancient, half-mad dragon named Icefyre who is obsessed with establishing dragons' rule over the world. The Keepers and the young dragons need to adapt quickly to face the growing danger that surrounds them. Alise and the Keepers work frantically together to find what they desperately need: the knowledge the ancient Elderlings have left behind.

Hobb's Rain Wilds Chronicles are a welcome change from epic or high fantasy. Her stories are informed by self-discovery, especially that of the young women characters. Unlike epic fantasy, her characters are refreshingly human and imperfect. Especially refreshing are the dragons themselves: alien and animal, replete with personality but not human. Magic is not the solution, the deus ex machina that all too often appears in this genre. Instead, it creates more problems, worse problems: deformity, illness, addiction. And instead of the quest for power, achieved by brute strength or armies and battles, Hobb depicts the quest for knowledge—a far more intricate and interesting journey.