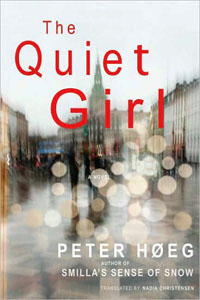 On its jacket Peter Høeg’s recent novel is called “a fast-paced philosophical thriller that blends social realism with the literary fantastic.” Forget about “fast-paced” and “social realism,” and put “quasi-“ before “philosophical,” and you’ll be better prepared for the many pages of pretentious and holistic spirituality ahead. Even clearer warning signs blink from the acknowledgments page; the first to be thanked is one Jes Berthelsen, an author known by Danish readers for his works on depth psychology and dreams, chakra symbols and meditation, inner tantra and the Christ process. One of Berthelsen’s books is about love as quantum leaps, another deals with heart prayers and iconic mysticism, while yet another explores the so-called heaven of now.

It all reads like a grocery list of the ingredients in The Quiet Girl, in which unscrupulous business types hijack some eerily perceptive children so as to predict, or even instigate, an unlikely Copenhagen earthquake and thus pull off a land speculation scam. Hired by an obscure monastic enterprise, Kasper Krone—a 42-year-old professional clown named after a German circus—maneuvers dizzily between a cast of saintly and shady helpers and adversaries towards the goal of saving the children.

So much for the plot, which is either disrupted by countless academic digressions or so veiled in extra-sensory mystique that its touch of realism fades into science fiction. Høeg’s ambitiously contrived agenda will not surprise readers of his third novel, Borderliners, whose title characters were reform school children at constant physical and emotional risk. As for that text’s immediate precursor, the international bestseller Smilla’s Sense of Snow, both its young and bicultural title figure and her underage counterpart were also in double jeopardy. Readers of The Quiet Girl who have experienced the larger than life spirituality and sensory capacity on display in these early works will be unsurprised to find the nature of time and being, memory and truth, dream and reality at center stage again. The author’s ambition remains unrestricted by borderlines and persists in border-transgression.

If the children in Høeg’s new novel, not least the quiet girl, have extra-sensory powers, so does their monastically enlisted savior, whose hearing is not of this world. Sound, be it of music from Bach to pop or the inaudible sound of human psyches, is his key to otherwise inaccessible truths and knowledge. In figures of synaesthesia, Kasper navigates the world by decoding its encrypted acoustic signatures. “He had always heard a shining green color around her,” it is said of Stina, the love of his life; and he never tires from listening to KlaraMaria, their daughter, “just to the color of her tone.” He can sense a “black sound hole in the world,” as opposed to an “acoustic pornography filled with profound sweetness.”

Such profundities unfortunately approach the kitschy and quackish regularly. Or they attract so much locker-room philosophizing that the actual sensations end up as riddles wrapped in conundrums. No area of expertise is alien to Kasper Krone and his narrator, name-droppers to no end. Musicology, seismology, and maritime navigation; food, wine, and watchmaking; theology, obstetrics, and mechanical engineering—these are but some of the venues from which these inveterate jugglers throw their conceptual balls in the air.

In fact, the whole novel is written with a juggler’s dexterity. At times it’s a highfalutin quest for omniscience—“He flowed into the feeling of being a child. . . he felt like a woman, utterly receptive”—and an admixture of exceptional sensibility and overwrought intellectualism; at others it’s a burlesque and picaresque novel performed with tongue-in-cheek and studied self-irony.

The opposites are glaring. In high-brow fashion the narrator proclaims that the “greatest performances were when fingertips took away a very thin veil between people and uncovered the universe in its entirety.” A whiff of self-deprecation, on the other hand, escapes Kasper when it’s revealed: “He loved science. And it didn’t matter that science did not love him. There can be great depths of love that are not reciprocated.” Stina drives the point home when she tells her lofty partner: “Your feelings have no depth… You live and talk as if you’re performing in the ring all the time.”

Once a performer, always a performer, and Høeg is no exception. For rather than also discrediting his own turgidity, his novelistic duplicities legitimize one another. Displays of the main character’s follies, amidst the man’s self-congratulations, actually serve to justify authorial grandiloquence and thus provide the author’s excuse for comparable bents.

The outcome is quite confusing, though it mirrors the novel’s thematic problematics. In a lucid moment the narrative affords that “You can’t be right up next to something, and at the same time want to understand it. Do you know what I mean?” Kasper probably doesn’t. Optimistically, he believes “Every great improviser can recognize another. By the ability to remember the whole picture in the midst of a fortunate flow of actions.” But as Stina pointed out, only as a performer can he see the forest for trees. Otherwise he knows not how to separate reality from dream, for pinching himself in the arm proves nothing—a bruise could be just part of the dream.

The problem with Høeg’s meta-physical quest is not its blurring of distinctions; juxtapositions of bashful chivalry and blatant humor, of tender bravado and self-serving courtesy, may be platitudinous yet artistically defensible. What undermines the synergy is its betrayal of the cognition it claims to serve. When a clown’s curiosity—like a child’s—is called “an openness, an appetite for the world, where nothing is taken for granted,” grasping what you approach is no longer precluded. An unavoidable cost has been voided by “flexicurity.” The term—flexibility with a safety net—is often used about the way the Danish welfare state enables bold entrepreneurship while protecting society’s social fabric. The artistic equivalent is but an attempt to have your cake and eat it too.