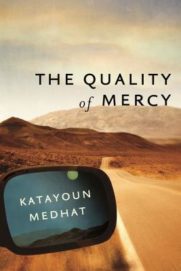 Crimes, cops, and communities that don’t respect each other’s cultural differences—all sound current and familiar. In Katayoun Medhat’s debut novel, The Quality of Mercy, one police officer, an outsider to the Southwest, works to solve the murder of yet another young Navajo man as feelings of distrust mount among people who live together and need to depend on each other. In this fast-paced story, some people worry that nothing will change, and that one more person will get away with murder.

As he checks backgrounds of victims, family members, and acquaintances in the usual manner, Kafka—known simply as K, a “provincial cop” as he calls himself—sounds and acts differently from his co-workers. “K was of the opinion that the disrespect of any social group or member of society compromised society at large.” That opinion is not completely shared by some of his fellow police, who think they need only to put in their time, not actually solve crimes in the nearby Navajo Reservation.

Kafka also believes the effect of murder goes beyond the loss of a life and affects other family members across generations. “Because that was what unnatural and violent deaths did—they tore into the fabric of life, ripped it to shreds, created runs that could go on forever.” The young victim’s own father had been killed as a young man with no one held responsible, and his aunt told K, “What he always says is that what happened to his dad showed him that nobody cares about you when you are an Indian.” That thought continues to go through K’s head as he works; he doesn’t want to be the one to prove the dead man right.

For readers who don’t know much about the Navajo, Medhat provides insight into their culture, past and present, through passages in the narrator’s voice and in what characters say to each other. At times these passages seem more instructional than conversational and slow down the action of the story, but like the rearview mirror on the cover reflecting a dark horizon, Medhat offers readers a chance to reflect on actions, inactions, and the lack of understanding and trust between the smaller cultural groups and the majority population.

Though the story centers around K’s efforts to find the killer, we don’t know much about his past, what motivates him, and why he came to the Southwest. That may well be intentional, however—and more books featuring this winning character would be welcome.