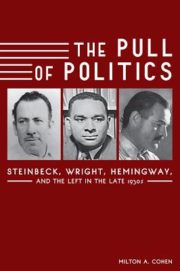 The Pull of Politics tells the fascinating stories of John Steinbeck, Richard Wright, and Ernest Hemingway, who all wrote successful novels with leftist politics at the end of the 1930s: The Grapes of Wrath, Native Son, and For Whom the Bell Tolls, respectively. Milton A. Cohen, a literature professor at the University of Texas, seeks to put their political ideology in perspective, showing how it reflected their times and lives. These novels were published during the Great Depression and before America’s full entry into World War II. The Grapes of Wrath showed Steinbeck’s concerns for the migrant workers who fled the Dust Bowl to California. Native Son imagines a Chicago man who accidentally kills a woman who is the daughter of a capitalist and the girlfriend of a Communist. Hemingway’s hero in For Whom the Bell Tolls joins the Loyalist forces during the Spanish Civil War. While all their politics are rooted in the time, the world was about to change for these authors dramatically when the United States became involved in the fray overseas.

Cohen seems somewhat annoyed by Hemingway's posturing with the literati, but he clearly appreciates Steinbeck and he successfully brings Wright's revolutionary struggles to life. More importantly, he discusses each author’s involvement with leftist and Communist causes. Steinbeck clearly wanted to share the wealth at the end of the Great Depression; Wright was a member of the Communist Party during the 1930s, but chose to break with them when they would not agree to fight racism; Hemingway was an ambulance driver during the war in Spain and a self-described “anti-fascist.” They all became disenchanted when Russia signed an anti-aggression pact with Germany, which led to more European countries being overrun. The war changed everything for Western society and culture; it was not until a generation later that the left had enough power to challenge the war machine in Vietnam.

While The Pull of Politics is a scholarly book, it will also help the general reader get a greater biographical sense of these writers’ politics. These writers were humanitarians, and sometimes warriors for their causes. Primarily they are remembered as iconic literary artists who challenged their times—which, as this book shows, is how it should be.