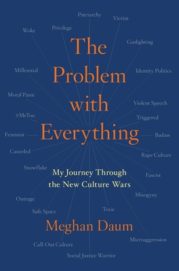 In her late forties, Meghan Daum moved from Los Angeles to New York, the land of her youth, and began writing The Problem with Everything: My Journey Through New Culture Wars. “I’d left California in 2015 in the wake of irremediable, if mercifully amicable, marital separation,” she explains, and her fifth book was to be about feminism in its various forms. Then Donald Trump was elected, and the book drastically changed shape into “a personal story of feeling existentially unmoored against the backdrop of a country falling apart.” While Daum’s essays are about subjects close to her, she writes in her usual clear, beautiful, nuanced way, having taken time to reflect. In eight chapters, she refreshingly pushes against “the weaponization of ‘social justice culture,’” herd mentalities, and nostalgia, giving readers a look at the state of America and themselves.

The book’s opening essay, “Sign the Petition: From the Meat Grinder To #MeToo,” investigates Generation X’s relationship with feminism. Daum reflects on the #MeToo movement beginning with her memories of flirty, uncomfortable dinners with an older, married man that she thought would further her career in the summer of 1995; “I behaved this way because I must have known on some unconscious level that, at twenty-five, I had more of a certain kind of power than I was ever going to have in my life and that I might as well use it, even if the accompanying rush was laced with shame.” She blames herself as much as him for these interactions. Daum notices today “the requisite smattering of middle-aged women offering stories of long-ago icky dates they’d suddenly been given permission to reinterpret as injurious” and sees those women as “tiny pixels coalescing into a giant portrait of rage in all its definitions.” She is highly critical of those who broadcast their unformed thoughts on social media, reacting without thinking. Following the Aziz Ansari dustup, Daum says, “I felt that my membership on Team Older Feminist was so official that I might as well take out a charge card at Eileen Fisher and call it a day (though has anyone under forty ever used a ‘charge card’?).”

In “Growing Up Zooming: A 1970s Childhood,” Daum examines her first encounters with feminism, both through her mother and the movies of the time. She writes, “I couldn’t wait to grow up and wear a power suit with Nikes and carry my high-heeled shoes in my briefcase.” Then, in the 1980s, there were “two high-profile child abductions . . . These images wallpapered the public consciousness and suddenly turned childhood itself into a form of personal endangerment”; women were held responsible for keeping children safe. Observing the current prevalence of constant outrage, knee-jerk reactions, and helicopter parenting, Daum states, “I’m troubled by the ways in which contemporary feminism has turned womanhood into another kind of childhood, one inculcated with the same kind of fear and paranoia that haunted the children of the 1980s.” And she goes on to reckon with the cost: “What I’m faced with now is a failure to be the right kind of feminist during a time when we’re told we can’t afford the wrong kind. Where I have failed is that I’m not an emergency-response feminist. I am not wearing the ovary sweater and the pussy hat like flashing siren lights.”

In “You Are Lucky She’s Cool: Toughness, Toxicity, and the Fall of the Fall of Man,” Daum writes most powerfully, as she has in years past, about Generation X; it “featured a lot of smirks, defiantly crossed arms, and expressions that fall somewhere between blank and fuck you. The idea was that the divorced parents and latchkeys around our necks and constant threat of nuclear annihilation had left us emotionally dampened. Before the age of ‘don’t give a fuck,’ we were kicking it old school by not giving a shit.” Her acute analysis leads her to view where she is today unflinchingly: “the low spark of smugness you see in a certain kind of aging person (this would be me) who clings to their toughness because they’ve lost hold of their youth.”

Woven throughout the book are Daum’s familiar love letters to NYC, which she presents as “a wild kingdom, a stone-and-steel fortress with rage burning inside.” But far more importantly, she consistently eschews labels and champions original thought. Each essay is a complex web for readers to navigate and the problems presented, Daum suggests, are really a privilege to solve because the process involves finding one’s footing in a storm. “Trumpism has made us feel that the world is out of control. In turn, we’ve forgotten how to control ourselves,” she observes. Daum continues to dazzle with her quick mind and sharp humor, embodying toughness and independence as she takes “a bittersweet walk down memory’s plank.”