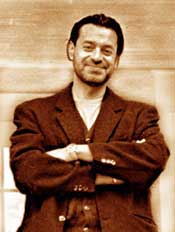 An Interview with Luis González Palma

A self-taught photographer from Guatemala, Luis González Palma creates expressive works of art that are often about contradiction. His portraits of Mayan Indians present a tragic vision of life that is full of pain and beauty. Often collaged with images of contemporary symbols, objects, and icons, the pictures act as records of life in a country where violence and mysticism coexist. At the same time, the overwhelming sense of humanity in each picture speaks to the photographer's ability to transcend cultural boundaries and tap into a pool of shared experience.

One of the most recognizable aspects of González Palma's photographs is their deep sepia tone. He achieves this by painting a standard black and white print with asphaltum, then further manipulates the image by removing the asphaltum from key areas, returning them to the original white of the photograph. The process turns the pictures into tangible objects with a sense of history, creating a dialogue with the past that works toward a realization of the complex social legacy of Guatemala.

Luis González Palma: Poems of Sorrow will be published this spring by Arena Editions; the book surveys the photographer's themes and obsessions since he began taking pictures over a decade ago. In his most recent work, González Palma continues to examine the subtleties of the gaze, along with the politics of looking and the complicity involved in the act of pointing the camera. He recently visited Minneapolis for the opening of his exhibit La Mirada Critica (The Critical Gaze) at the Weinstein Gallery.

Elizabeth Culbert: You trained and worked as an architect before making a transition to photography. How has your relationship with photography changed since you began taking pictures?

Luis González Palma: I think my relationship with life has changed—right now I want to make more complex images than before. Complex in the sense that I try to put in a lot of information, sometimes contradictory information.

EC: You continue to use certain symbols that appeared in your early images.

LGP: Borges said that we only make one work in our life; we just give it different names. I think that my obsessions are the same. I know that I make variations on just one theme.

EC: What is that theme?

EC: And you see this in the faces that you photograph?

EC: Most of your pieces are based on portraits. What draws you to the people you choose to photograph?

LGP: I wanted to make these kinds of relationships. Usually the Indian people are outsiders who have to look up at the people who look down. For me it's very important to place these portraits in the horizontal view—to create horizontal levels in communication, so you see the person's face directly. I think in the beginning it was a little political, but mostly my interest is to bring people to the same level. I come from a very racist country. The Indians are a marginal people in Guatemala just like I am a marginal person in the first world. So I try to balance things.

EC: So you're commenting on power relationships.

LGP: Yes . . . but also I try to say that a face, to me, is a metaphor of sadness. And I want to share this sadness. At the moment I'm not really interested whether it's an Indian face or not—that's not as important for me. But it's still important to establish the relationships in order to bring about a consciousness of our fragility.

EC: How does your audience react to these ideas? Your pictures have been seen in Europe, Central and South America, and the United States. Do you see a difference in the reaction of your viewers around the world?

LGP: It is different. People with a large Indian population look at them in a different way. Whereas people in Italy, France, even the United States, find exotic faces in the images. It's all part of what I want to do.

EC: You talk a lot about writers and musicians who are important to you. How do you incorporate their experience in your work?

LGP: I just try to incorporate the emotion that I have. For example, if you can explain a poem, it is not a poem. Poetry has to be inexplicable. And it is impossible to explain the emotion of the violin from Bach. You can talk about something, but to explain why you feel things . . . you can't. So I try to have an emotional impact, not with words or sounds, but I try to get these deep emotions from images.

EC: Who are some photographers who have that emotion?

EC: How do these influences play a role in your own photos?

LGP: I am a postmodern romantic. I try to use their way to photograph, and at the same time, incorporate the problems that I feel in a country like Guatemala. And at the same time, the philosophy of Persia in the 11th century. I try to take a lot of things and put them, not in one image, but one . .. I hate to say one work, it's so pretentious!

EC: People have used the term "magic realism" to describe your photographs, but you prefer "poetic realism." How do you define this?

LGP: You know, everything unusual is "magical" or something for this country. But they are not exotic for me. They are not magical. When I put flowers on a woman, it's not a way to make her face exotic—it's more a way to charge her face in a romantic view. I enjoy being a romantic at the end of this century.

EC: Do you feel part of the community of contemporary artists as a romantic working at the end of the 20th century?

LGP: Sure. I want to be a contemporary artist and at the same time a romantic!

EC: Is it difficult to unite the two?

LGP: I don't know if it's difficult or not, but it isn't interesting for the mainstream. Fortunately I don't want to be part of the mainstream. When I see a Kiki Smith work, for example, she's very contemporary, and I feel a lot of emotion in each of her pieces; I think she understands our time, and she makes really interesting art because of that. But it's not necessarily more important than a man who paints a typical landscape in Peru. Because Kiki Smith is a wonderful artist doesn't mean that the other one is a lesser artist—it's just different. I think that all the people who spend time in their lives thinking about these things are emotionally at the same level, they just have different ways of perception.

EC: You have recently begun a project in Guatemala called Colloquia that involves bringing together artists of diverse backgrounds.

LGP: Colloquia means dialogue in Greek. It's very hard to try to be a cultural . . . you know, people who organize cultural things . . . it's very complicated. And more so in a country like Guatemala. But I feel that it's part of my mission. If I have all these contacts around the world, if I meet a lot of artists and interesting people, why don't I bring these people to Guatemala and share my experience with people who don't have the chance to travel around? But I think we started in the wrong direction.

EC: What direction did you take?

LGP: At the beginning it was like a contemporary art center. And then I realized we didn't have to copy the organization or the function of a contemporary museum in the United States, for example—we have to invent another kind of project, because we are in a completely different kind of situation. To have a museum like the Museum of Modern Art in New York is to have power. I don't have any interest in being the director of an institution that has power. So, right now, we try to get money directly to the artists, eliminate curators . . . we try to work in a different way. I'd prefer to invite the artists simply to work and have fun with Guatemalan artists. To talk as we talked last night, for example. To share missions of life. Maybe that is more important than seeing an exhibition. We invited some artists this year just for that: to have parties, to talk, to try to have more emotional contact than you can have in formal opening receptions.

And we want to have more urban projects with Guatemalan artists, in the centers and in the streets. We're trying to start a sculpture garden, not like the Walker, but in a very contemporary and contradictory way . . . pieces in different gardens and different places. Right now we have maybe a thousand dollars, so it is illogical for us to spend a thousand dollars for a catalog. I prefer to give a dollar to a thousand people. We want to bring the money to the artists and not make a catalog, or maybe make a very humble catalog, a simple thing, and try to work that way.

Another part of Colloquia is a small newspaper that we send just to the marginal parts of the city and not to the privileged zones; we put it in the supermarkets, McDonalds, places like that. It's usually the art world and the art society who receive this information, especially in countries like Guatemala, so we try to change the relations. But at the same time, we send a copy to you, for example, or to another friend or artist or writer. To the director of a museum in Spain, and at the same time to people who live in a marginal place in Guatemala. So we have these two things, no?

EC: Which themes do you pursue in your art and in these projects?

LGP: For one, transparency. Because our gaze is transparent.

EC: Which is very postmodern and romantic.

LGP: Yes. Now you understand me!

EC: You have a book coming out soon that combines poetry with your pictures. Tell me about the different elements that will be presented.

EC: Does that bother you? The lack of control?

LGP: No . . . I think it's impossible to know the destiny of things. For example, at the Minneapolis Institute of Arts, I imagined when I saw a portrait of a woman in the 17th century, if the painter knew that someone from Guatemala three centuries later would communicate with this work . . . you never know who will see your images hanging. And I like that. I think you never really have control over the things that you do, and this book is one of these things. You never know who will take the book and read it, or maybe cry at some images, or fall in love with someone in front of the picture, things like that. It's impossible—only God knows.