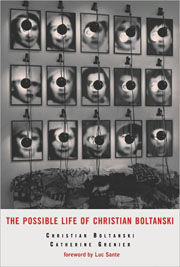 When Christian Boltanski describes his 2004 interview sessions with art historian Catherine Grenier as “psychoanalysis” or “confessions,” the French conceptual artist is spot-on. Translated into a 200-plus-page Q & A memoir, The Possible Life of Christian Boltanski reads as part sober rumination and part look-at-me exposé covering all manner of topics, including the artist’s childhood, family, career, marriage, friendships, successes, failures, and ongoing cogitation on death. The roughly chronological, oral autobiography is divided into seventeen chapters with titles as straightforward as “Beautiful Photographs” and as evasive as “Tell the Truth?” According to Grenier, the weekly interviews “followed a strict guiding principle: to narrate his life as well as his work, and to avoid modifying or censoring anything that was said.”

The first chapter, “Childhood,” starts before Boltanski was born, and revealingly sets the stage for his later artistic explorations of childhood, memory, identity, absence, and death. We learn that the artist was the youngest of three boys born to a Jewish physician father and a Catholic writer-intellectual mother. Boltanski deftly constructs, often with humor, a portrait of an idiosyncratic family whose members never went outside alone, rarely bathed, and all slept in the same bedroom, even though they lived a bourgeois life in a large apartment in Paris. For instance, he says his father “was so detached from the world—no desires, no friends, nothing . . . I never knew him to have a friend, I never saw him go into a café. It just didn’t happen.”1 During the war his mother feigned divorce and hid her husband under the floorboards—although the artist concedes his father must have come up for air occasionally, as he was conceived in 1944—and Boltanski comments frequently how the Shoah was like a shroud over his youth.

At age thirteen Boltanski decided to be an artist. He had made a little object from modeling clay that his brother Luc told him was beautiful, and that was that. His career of mixed-media installations, photographs, films, and performances had been launched by a lump of clay, even though he never went out alone until age eighteen, lived at home into his late twenties, and played with toy soldiers until he was thirty-five. He believes his “real work” began in 1969; by the mid-1980s Boltanski was an artist of international acclaim. Speaking of his career in the context of his family, Boltanski states, “I was really incredibly lucky to become an artist, because we lived in a general atmosphere of danger, a fear of life.” The Possible Life, in fact, riffs on the title of Boltanski’s first film, La vie impossible de Christian Boltanski, made in 1968.

In addition to getting a bead on his formative years, Boltanski provides a quirky, bird’s-eye view of the Parisian and New York art scenes; he also discusses his many projects and their raisons d’être, candidly speaking about his successes and failures with both gallery and museum exhibitions. We are informed that his work draws on experiences of communism, Nazism, and Christianity, as well as the terrors of war and evil, and that Boltanski sees himself firmly lodged in the twentieth century. “My forms change, but my preoccupations remain Existentialist, even if I was unaware of those ideas that the time. I’ve still read very little Camus . . . yet I belong to that current of thought.” He also labels himself an expressionist and is interested in investing his work with “emotion.” The book provides valuable insight about his perceived aesthetic relationship to such artists as Gilbert & George, Beuys, Warhol, Fellini, Giacometti, Duchamp, Félix González-Torres, and Pina Bausch.

It may provoke art aficionados to learn that Boltanski feels his truly creative period began when he exhibited at the 1972 Documenta and ended in 1994, even though he continued to create and exhibit art. He now considers himself an “artist of space” and claims the notion of space is central to his work. Boltanski also views himself at odds with much of the contemporary art world. In the chapter “Artistic Affinities” he comments,

One thing that really irritates me is that a large portion of art today doesn’t talk about life, but instead talks about art . . . today, art that’s concerned with reflecting on art just goes in circles; it’s like kicking yourself. Moreover, I loathe the whole “little play on words” thing. Turning quotations into conceptual jokes seems rather rude to the artists who get looked down on, and I don’t see the point to it.

The Possible Life is a meandering but fascinating memoir that at times doubles back on itself—but then, perhaps, that’s the beauty of an endless, uncensored interview. There are also numerous contradictions. For example, early on Boltanski reflects on his happy childhood saying, “My parents would take me to school and come to pick me up.” Just a few pages later he describes his childhood as “one with lots of freedom: for instance, I didn’t have to go to school. Deep down, I think they [parents] were delighted that I didn’t go.”

Marc Lowenthal’s translation reads well except for some questionable word choices, such as when Boltanski says, “for an artist to do something, he or she must be surrounded by a whole compost of people.” The only real flaw in the book is the relative dearth of images. Even those familiar with Boltanski’s oeuvre can become lost in the in-depth discussion of his various series of works; for the uninitiated, the lack of visual reference might be cause to stop reading. At the very least, a chronology and an index would have helped the reader trace certain works, themes, and exhibitions across the text.

These minor flaws aside, The Possible Life is an inspired book that prompts the reader to ponder one’s own childhood and mortality. Boltanski’s thoughts on these topics are often unexpectedly enlightening, but in the end, it is important to keep a bit of “distance”—a quality Boltanski believes is critical to his art. On the first page he states, “What I love about memories is the mix of clarity and confusion. But as everybody knows, early memories are almost always invented . . . I think very early memories always correspond to a feeling: they’re visions.” On the final page Boltanski admits, “I am an incredible liar. I think lying is a positive thing . . . . and since no one knows what the truth is, it isn’t very important.” So Christian, is it or isn’t it? The Possible Life may very well be impossible, but it is still a provocative read embedded in the real.

1 Ironically, in spite of Boltanski’s father’s solitary behavior, as a youth he had been friends with the Dadaists Theódore Frankel and André Breton. Later, his father and Breton had both studied medicine but lost track of each other during the war. When Boltanski began to paint as a teenager, his father wrote to Breton asking him to visit his son. Breton’s response to Boltanski’s paintings? “I advise you not to become a painter. It’s a very difficult trade, and a rotten milieu. You seem like a nice young man, you should do something else.”