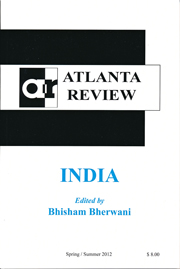 In 1963, the prominent Bengali writer and critic Buddhadeva Bose voiced some speculation as to why Indians, “who have always had a firm poetic tradition in their own languages," attempt to write verse in English. Like others at the time (but more derogatorily than most), Bose used the term “Indo-Anglian” to distinguish Indians writing in English from Anglo-Indian (i.e., British) writers like Kipling, concluding that “Indo-Anglian poetry is a blind alley, lined with curio shops, leading nowhere.” Printed in The Concise Encyclopaedia of English and American Poets and Poetry, edited by Stephen Spender and Donald Hall, Bose’s statement caused a heated controversy in India, where a younger generation of poets was forging a new poetic language and canon from the idiom of their former rulers, at the same time distancing themselves from both the Anglophiliac ambitions of the Bengali Renaissance and the Anglophobic attitudes of the nationalist movement.

Four decades later, another prominent Bengali writer and critic, Amit Chaudhuri (born the year before Bose’s rant), acknowledged, “Some of the best writing in English in India is being done by poets.” Between these two antipodes unfolds the rich and variegated landscape of contemporary Indian poetry in English. Not a “blind alley” for sure, and certainly not “lined with curio shops, leading nowhere,” but rather a large—and largely urban—avenue, marked by manifold voices, significant milestones, and a canonical sense of tradition.

Such a landscape has been explored thoroughly over the past fifty years by several anthologies, from P. Lal’s Modern Indian Poetry in English: An Anthology & Credo (1969), an emphatic yet overinclusive reaction to Bose’s statement, to Jeet Thayil’s 60 Indian Poets (2008), published simultaneously in the United Kingdom as The Bloodaxe Book of Contemporary Indian Poets(with twelve more poets), and distributed in the United States. Part of Thayil’s anthology had appeared in the 2005 issue of Fulcrum: an annual of poetry and aesthetics published in Cambridge, Massachusetts, as “Give the Sea Change and It Shall Change: Fifty-Six Indian Poets,” the reading of which prompted Chaudhuri’s statement quoted above. While other U.S. literary magazines had published “Indian poetry” issues over the years, Thayil’s selection was too comprehensive and ambitious not to anticipate an anthology in book form. It was also too inclusively, if not trendily, focused on younger and diaspora poets.

This cannot be said of The Poetry of India, Bhisham Bherwani’s terse and incisive anthology of fifty-four poems by “twenty-one modern and contemporary resident Indian poets,” which forms the better part of the Spring/Summer 2012 issue of the Atlanta Review. A talented poet himself, Bherwani is also a fine connoisseur of poetry with a sound academic background and good literary connections in India and the United States.

In applying clear and rigorous criteria to his selection, he follows in the tracks of previous poets-editors, whose anthologies contributed to the definition of a canon for contemporary Indian poetry in English. Unlike most of his predecessors, however, Bherwani limits his selection to poets who live or lived in India, thus excluding such established names as Meena Alexander (b. 1951), Aga Shahid Ali (1949-2001), Sujata Bhatt (b. 1956), G.S. Sharat Chandra (1935-2000), R. Parthasarathy (b. 1934), and Saleem Peeradina (b. 1944), as well as many, if not most, representatives of the younger generation, who, like Bherwani himself, live and work in the United States or Western Europe. (The only exception is A.K. Ramanujan, who spent his entire adult life as an academic in the United States, but whose absence would automatically demote any collection of Indian poetry, in English or otherwise.)

The second group includes poets born in the first decade of Independence: Arvind Krishna Mehrotra (b. 1947), Bibhu Padhi (b. 1951), E.V. Ramakrishnan (b. 1951), Rukmini Bhaya Nair (b. 1952), Manohar Shetty (b. 1953), and C.P. Surendran (b. 1959); while the younger generation is represented by just four names: Menka Shivdasani (b. 1961), Jerry Pinto (b. 1966), Arundhathi Subramaniam (b. 1967), and the Indian-born, Tibetan activist Tenzin Tsundue (b. ca. 1975), whom Pankaj Mishra has called “the new and most visible face, after the Dalai Lama, of the Tibetan exile community.” His inclusion (to my knowledge, the first in an anthology of this kind) adds a militant edge to the landscape of contemporary Indian poetry, something that it seems to have progressively lost since the 1970s.

This multi-generational span naturally lends itself to a chronological arrangement, which is the approach a less original editor would have taken. Instead, Bherwani avoids common criteria (chronological as well as geographical) and juxtaposes original poems and translations to reveal subtle affinities and intimate relationships, all otherwise difficult, if not impossible, to perceive and appreciate. This is the case, for example, of Tenzin Tsundue’s “Betrayal” and Nissim Ezekiel’s “Commitment,” confronting each other on the issue of commitment (or loyalty) and betrayal often being two sides of the same coin. Or Ezekiel’s autobiographical account of growing up a Jew among Roman Catholics, Muslims, and Hindus (from “Background, Casually”), facing “The Ambiguous Fate of Gieve Patel, He Being neither Muslim nor Hindu in India,” a bitter, satirical poem on religious hate and violence on the Subcontinent. More intriguing, perhaps, is how translation as poetry (or vice versa) is first introduced as a diptych represented by Jayanta Mahapatra’s version of a poem by his Oriya contemporary, Bhanuji Rao (b. 1926-2001), coupled with his own “At the Summer Palace of Tipu Sultan, Seringapatam.” This is followed by three poems from Ramanujan’s posthumous collection The Black Hen(1995), the last of them (“Love 4: what he said to his daughter”) virtually introducing a selection from The Interior Landscape (1967), Ramanujan’s groundbreaking translation of classical Tamil poetry. Juxtaposition invites comparison and contrast, and here as elsewhere in The Poetry of India the reader is constantly confronted with thematic correspondences and relationships in poems that otherwise show very different interpretive and stylistic approaches.

The inclusion of contemporary English versions of poems originally composed in classical and modern Indian languages, and the significant amount of space allotted to them, constitutes perhaps the most original and defining editorial criterion of this anthology. So much for another of Buddhadeva Bose’s peculiar claims: that “poetry translated into English from the modern Indian languages does not constitute English poetry written by Indians.” On the contrary, any reader familiar with Ramanujan’s translations from classical Kannada and Tamil poetry, Mehrotra’s versions from the second century Prakrit of the Gāthāsaptaśatī, or Dilip Chitre’s and Arun Kolatkar’s renditions of Marathi religious poets (all finely sampled here), would certainly recognize and appreciate this poetry’s striking, innovative style, its fresh and modernizing interpretive approach, and its achievement as Poetry per se. In fact, there is no doubt that translation has played a fundamental and unique role in the creation of a distinctly Indian poetic language—and canon—in English during the second half of the twentieth century. Yet this role has never been seriously acknowledged, or even addressed, by any of the anthologies published so far (perhaps as a consequence of a lingering, Bose-like prejudice against translation, and poetry translation in particular), and Bherwani should be given credit for changing the attitude in this regard.

Over the past two decades, a number of anthologies of contemporary Indian poetry have been distributed in the United States (Thayil’s being the most recent one), yet only a couple actually originated with an American house. One, Contemporary Indian Poetry, edited by the Bangladeshi poet and critic Kaiser Haq (Ohio State University Press in 1990), is twenty years old. The other, Indivisible: An Anthology of Contemporary South Asian American Poetry (The University of Arkansas Press, 2010), is described by its editors—Neelanjana Banerjee, Summi Kaipa, and Pireeni Sundaralingam—as “the first anthology to showcase American poets whose ancestral roots lie in Bangladesh, India, Nepal, Pakistan, and Sri Lanka”—though this begs the question, what constitutes an “American” poet? A natural-born or naturalized citizen, a permanent resident, or someone who is simply living in the United States? For different reasons, neither of these two U.S.-born anthologies fills the gap that an expanded, book-length version ofThe Poetry of India would naturally fill, thanks to its sensible selection criteria and Indian focus. While the appetite of the literary markets for Indian authors keeps growing, this little anthology obviously deserves wider exposure, deeper attention, and a longer life than any literary magazine can guarantee.