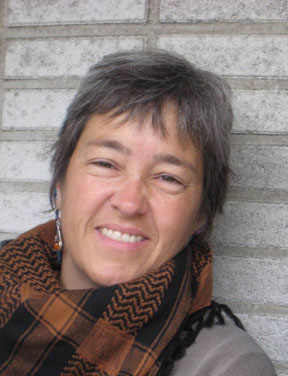 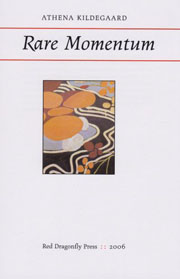 First collections of poetry can be exciting: brand new talents, fresh voices, limitless potential. Sometimes a second collection has the power to confirm that talent, though sometimes it can expose a fluke. But a third durable collection of poems is a significant accomplishment. Not only does a poet have the unique voice and keen eye to propel them onto the poetic landscape, but they have the ingenuity, tenacity, and skill to remain there. Such is the case with Athena Kildegaard.

Beginning with Rare Momentum (Red Dragonfly Press, 2006), a collection comprised entirely of “fibs”—derived from the numerical scheme given centuries ago by one Fibonacci, a strategy requiring a set syllable count in seven lines of increasing length—the poet’s worth is on full display. For Kildegaard, the poems are all without titles, such as:

Rose
rose
open
lips and tongues
berry blossom banquet
twelve gifts arrived at the door
passed in by a mute stranger from the snowy front stoop.

The world isn’t all peace and love, we know, or it would be a much more sedated affair than we’re used to. But neither is it total devastation—

Sun
sets
against
the plate glass—
Manhattan blushes
as if she’d stepped naked and cold
from the Hudson to find her robes nicked by hooligans.

Kildegaard “challenges us to reflect,” wrote Nancy Kenney Connolly in the literary journalBorderlands (Fall-Winter 2007). “This characterizes most of her fibs. In the manner of a nautilus shell or a galaxy that spirals larger and larger, she tends to start small, as with a single object, and sweep ever wider in a way that flows naturally, inevitably, and conversationally.” In his preface to this collection, John Calvin Rezmerski also notes this poetic discipline and swift coherence, such as the poet expresses after a visit in 2004 to Washington, D. C.:

Not
here
ruins
or only
loss and memory—
gaunt shadows of what we should have
known about our savage selves. Remind us now again.

In 2011, Bodies of Light appeared, again from Red Dragonfly Press. In this book, the poet’s spouse is frequently the focus of watchful serenity, as in “You Are Like a Star”:

Even the otter finds its way
to the creek by your light.

Buds on the fig dare to open,
the thief reconsiders.

I can stand out here all night
beside the blue shed

embracing you, my hands sure of everything they touch. 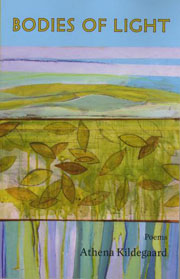 Other poems such as “Raccoon,” “Under the Pepper Trees,” and “Aria” reflect Kildegaard’s travels and living in various, disparate locales, as well as her wide reading augmented by intense interest in both visual art and music. Still, the convergences of time and place sometimes wrench one’s sense of perspective, as in these final lines of “Last Night in Mississippi”:

. . . It’s all a crime.
That we cannot stay in one place.
That we cannot leave when we should,
because we’re afraid or we’re slow
with ourselves. I stand here
in the muggy night trying to hold
onto it, in case I don’t return.
The blue hydrangea droops. Already
I’m forgetting the things I meant to say.

Growing older for both the poet and her spouse has meant appreciation of life’s evolving passages, not regretting lost youth. In precise, syncopated lines, she describes “Middle Age”:

Late afternoon, the crickets’ vibrato songs
like urgent telegrams from the frontier
announce the summer’s longest day.
Already we’re waiting for rain
and the tomatoes haven’t set their fruit,
the lilies arch, heavy with tight blossoms.
We sit on the patio with our gin and tonics,
the grass expectant before us. Children
should be here, in bright suits,
leaping through arcs of water. Instead,
they’re older, loosed and off with friends,
and we sit in the shade, listening. 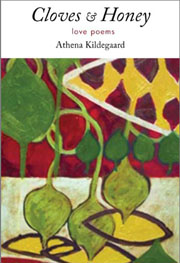 Kildegaard’s latest book, Cloves & Honey (Nodin Press, Minneapolis, 2012) has “Love Poems” as a subtitle. In four seasonal sections, “Spring” naturally comes first. Celebrating her marriage of over thirty years, the poems are—again—untitled and were written over the course of a single year. In taut couplets the reader is invited into the poet’s amazement:

There must be rules for what goes
into a love poem: a full moon, a red rose,

breast—heaving or cream-pale—night
and stars, a balcony, all that seems right,

and a trellis precariously tipped against
a cold wall where the lover, alert and tensed,

over the crenelated wall to where—
no, this is silly, I can’t go there—

we’re fifty after all, do mostly what we should,
follow no known rules, though heaving’s good.

The musician within the poet augments her sight of the ephemera, the beauty of this transience in direct imagery, as in a tremulous page from “Summer”:

John Cage said that quiet sounds
are like love

a monarch dropped down
into the white snapdragons

one wing sighed away
an arc of silence

returned to the radial
connecting body to light

how I wanted to hear
the powdery meeting of wings

Kildegaard’s achievement is in her sculpted delicacy, her use of few words to say much, not unlike Jean Valentine or Robert Creeley. Thus, memories and middle age bring visages of death and sadness, although music can evoke an unquantifiable richness:

We listen to Haydn’s Variations
in F Minor, a dark key, though not
consuming, rather the dark
of geese passing in October,
their shadows falling where snow
will insulate spring’s iris.
I think of a friend who died
a year ago, how he loved Haydn
and wrote of death and carried books
wherever he went. Hold my hand,
help me through the shadows.

Although she waited until age forty-seven to publish her first book, all three of Athena Kildegaard’s collections of verse now in print display uncommon skill depicting her own life and those she witnesses. The poems throughout these three books more than make up for the long wait—indeed, her verse is highly inventive, playful, superbly crafted, and very insightful about this mortal business known as living.