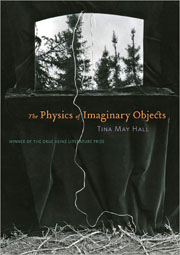 As a physical object, Tina May Hall's story collection The Physics of Imaginary Objects is a tiny, perfect thing. But then, so are the stories contained therein. Hall’s collection amounts to a mere 150 pages; one senses that when she writes, she spurns computers and stands at a letterpress instead, choosing letters one by one, testing thousands of words in each sentence, arranging and rearranging each possible configuration until she gets it exactly right. That is not to say that the book is “careful,” for that would imply convention, blandness, and a lack of imagination. Hall’s carefulness takes marvelous risks. For all its linguistic precision, the collection is also whimsical, brutal, and structurally experimental, with beats of subtle humor woven in. Though a minimalist, Hall’s sparseness is artful and bold.

At twelve pages, the first story, “Visitations” is the longest in the collection. With her lover out of town, the narrator, a pregnant woodcut artist, copes with the thickening smell of decay as trapped squirrels rot behind her kitchen wall. Though the smell is nauseating to her, it attracts wildlife from the woods— spiders, birds, deer, wasps. The wilding of the domestic sphere calls attention to something amiss in the couple’s relationship, their growing estrangement fueled by the narrator’s propensity toward solitude. She seems a half-wild creature herself, gnawing endlessly at meat, shirking domestication, pushing away the lover who carries yellow squash to her on a two-mile trek through the woods. The brutality of her eating contrasts with the delicate life growing inside her, a bodily change she finds bewildering: “I felt bones slipping where there should have been no bones.” Hall pairs the disorienting psychology of pregnancy with the reciprocal feelings of strangulation and wonder that accompany love, painting a complex narrative with delicate brushstrokes.

Another story, “Skinny Girls’ Constitution and Bylaws,” takes on a different tone, more comical than the first, more fragmented in form, but still with Hall’s stunning prose. The story starts with this one-sentence paragraph: “We will know each other by the way our watches slip from our wrists, the bruises on our knees, our winged shoulder blades tenting silk dresses.” Hall’s descriptions transform a clique of petite schoolgirls into a gaggle of supernatural witches, transparent underwater and invulnerable to nooses. The utter beauty of each line mocks our cultural awe over pre-pubescent thinness. Take this sampling of lines: “When we lift our arms to the moon, there is a sound like branches scraping”; “We will gestate plump happy babies in the bone cages of our pelvises”; “We will donate cells drawn from the doorknobs of our spines, the needle a key turning us”; “We wash in teacups. We chart the stars on our scapulae, make telescopes of thumbs and forefingers.” It is remarkable the number of brilliant lines that Hall fits in these five pages.

The prose in “For Dear Pearl, Who Drowned” is beautiful in a completely different way. Take the story’s second paragraph: “Her knees glow in the shower. She scrubs them hard. They are red and wistful. She has given up on soap. Soap is for sisters taking baths together. Soap tastes like Sunday nights. Now, everything is scrubbing. She scrubs too hard to be clean. It is hard to scrub oneself clean. It is hard to be clean. It is hard to be”. As the protagonist tries to make sense of a drowning, the narrator tries to make sense of language. The sentences are simple, childish. They combine and recombine images. They test different combinations of words to see if a new arrangement will make the plot turn out differently. Paragraphs trail off with no end punctuation, as though the protagonist seeks to avoid pain by leaving sentences unfinished; if one doesn’t verbalize an event in language, perhaps it didn’t happen. The images in the story— of rivers and eggs, wrinkles and teeth, teacups and pills— take on a surreal quality when they are spun through a linguistic game of repetition and reappropriation. The final effect is gut wrenching, making the wordplay a miraculous narrative feat.

While Hall can do tragedy remarkably well, the book hardly performs in just a mournful key. In “The Woman Who Fell in Love with a Meteorologist and Stopped the Rain,” for example, Hall takes us on a light, metafictional romp. She writes, “This is not a love story. If it were, there would be a certain pathos in a woman conjuring a lover out of storm watches and tornado warnings.” The story “How to Remember a Bird,” about a town that births a hole which swallows things— the bakery, reporters, armchairs, staplers, shoes— has dark undertones, but there is a playfulness in Hall’s existentialist spinning of metaphors, that somehow makes that darkness comforting rather than grim. And the six-page “Faith is Three Parts Formaldehyde, One Part Ethyl Alcohol” is surprisingly poignant, narrating a sweet exchange between Rosa, who cut off her pinkie finger to forge a divine link with God, and a man who’s had a tracheotomy and carries in his pocket both a silver voice box and a cassette tape on which his childhood voice sings a song about a spider and a rainstorm.

Hall ends the book in the place where it began: with pregnancy. However, while in the first story the narrator finds herself ill-suited for being a wife and mother, in “All the Day’s Sad Stories,” the series of prose poems that closes the book, a couple cannot get pregnant. While disasters are happening elsewhere, piped in on the evening news, the couple’s mundane routine, filled with all the strategies of those trying to conceive, is marked by futility. Hall infuses even the items they touch at the grocery store— “the paper skins of garlic,” the cantaloupe lifted to the nose to sniff— with sadness. She writes:

It is autumn and late at night and the moon is shriveling like a mum. Mercy buys olives, soda water, bright red pistachios. She has cravings; sometimes she licks salt off her index finger if there is nothing else in the house. The store is air-conditioned and fluorescent. There is a frost warning for tonight. Mercy and Jake wrapped their shrubs with burlap, and now it looks like a row of decapitated heads rings their house. The sliding doors at the front of the store whisper. Mercy has a hard time triggering automatic things— doors, faucets, towel dispensers. She spends a good portion of her time in public waving her hands at electronic eyes.

Domesticity takes on a certain quiet beauty in this final piece. There is beauty in each hiccup and child-sized yogurt cup, in “a bouquet of icicles pilfered from the bus shelter’s overhang, sharp as knives, already melting,” and in “the miniature trees [that] have outgrown their shapes.” It seems that Mercy and Jake’s inability to birth what they crave, to turn something as vulnerable and potentially imaginary as love into a child, is what makes them notice these small beautiful things. While their longings are left unfulfilled, ours as readers are quenched, for Hall has birthed her tiny perfect things over and over by magically reconfiguring the simplest words.