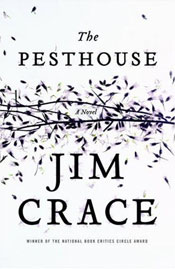 Of all the possible futures for America, there are few more chilling than the ruined and devolved country imagined by Jim Crace, one in which Manifest Destiny has reversed eastward in a sad retreat to the mother country. One might think this story a sort of vengeful commentary by a British writer, but our revolution happened over 200 years ago and is old news. The Pesthouse makes no mention of how America dried up and turned into a pre-industrial, plague-ridden, lawless version of itself, with a few people holding on for dear life and relying on the new commodities of fear and escape to survive. What matters is who they become in the face of it.

The story begins in the small enclave of Ferrytown, still thriving because they have a stronghold on the only means to moving east: a boat that will take people, horses, and supplies across a wide river and closer to the great sea. However even this small victory of survival gets squashed rather quickly by Crace; he kills the entire town with one giant poisonous belch—probably a pocket of methane gas—from the lake upstream. Only two people avoid the horrific fate of the villagers. Margaret lives because she was taken to the pesthouse situated above the village when she exhibited signs of the “flux,” a plague passed from traveler to traveler. Franklin Lopez, one of the many migrants heading east, was also on the hill above Ferrytown with an injured knee, waiting for his older brother to return for him. Franklin overcomes his fear of the flux and enters the pesthouse to escape a torrential rain, meeting the shaved and recovering Margaret. And so their adventure and friendship begins—forged by loss, desperation, and finally love. Franklin burns down the village of the dead, and they move on ever eastward:

The fire was in the west and not ahead. Hadn’t that always been the prophecy—that mother would abandon daughter to the ashes, that father and son would depart from one another in flames, that before the doors of paradise could open there would have to be a blackened, hot, and utter silence in America, which could be quenched only by the sea and would be survived only by the people of the boats?

There is no union left in this United States, as people are enslaved, beaten, and raped, and families are torn apart. All knowledge of history and industry is gone—great hulking and rusting machines dot the landscape on the road to salvation. And the people are left to forage what they can, barter for food, and foster their superstitions. Margaret must take refuge with the religious order of the Finger Baptists who spurn all metal wares. Their ruling members, the Helpless Gentleman, refuse to lift their hands to do anything because “hands do Devil’s work.” Crace seems to delight in emphasizing the futility and absurdity that arises in the face of desperate times. “Wingless and with withered arms, they’d earn their places at the side of God.”

Yet, however horrible the situation gets in this imagined wasteland, Crace treats his main characters with the utmost respect and affection. He wants these two people to survive. Margaret and Franklin epitomize the true character and integrity of Americans—the guile, the self-doubt, the determination, the necessary love and compassion needed to rise above the feckless and despicable people around them. The Pesthouse is a novel of gorgeous language and exquisite pacing to be sure, but perhaps the most beautiful thing about the book is how Crace really cares for these embattled Americans.