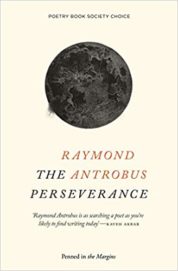 Raymond Antrobus
Penned in the Margins ($14)

What language
would we speak
without ears?
—“Echo”

In The Perseverance, Raymond Antrobus explores marginalized experiences and identity in the not-so-distant past and the post-Brexit world, alarming and unsettling his reader in necessary ways. The poems not only call out famous figures like Alexander Graham Bell, but pluck from the abundant contemporary political and social landscape. The reader faces questions about how masculinity, language, and race are presented today, alongside how deafness is (mis)understood.

Antrobus’ poems explore what it means to have a voice in a variety of registers, from the poetic to the historical to the everyday. From a negotiation between wealth and poverty in “My Mother Remembers” to the frustration that refuses to admit defeat in “Dear Hearing World,” the speaker’s words glint with a sharp edge:

I have left Earth in search of an audible God.
I do not trust the sound of yours.

One of the central concerns in the collection is an exploration of language as a means of communication, a construct that for many is automatically associated with the auditory experience. Antrobus goes beyond familiar linguistic boundaries and points to people whose forms of expression continue to be silenced. The Perseverance does not set out to speak for, but to remember and challenge the repetitive cycle in which the victim is left to seek reconciliation within themselves. Poems like “Samantha” confront the reader with a simple fact:

I know the deaf are not lost
but they are certainly abandoned.

Not only do the poems speak on paper, they live beyond the page, for Antrobus’ poems belong in the mouth, ear, mind, and heart. The Perseverance creates a loud silence that lingers over the poems, which are both a poetic deconstruction of the author’s life and an exploration of various identities and experiences. Linking these poems is a desire to communicate that is never realized, because their conversation partner fails to accommodate any perspective other than their own. A frantic chorus, bursting out as soon as one opens the book and begins reading, The Perseverance presents a voice that is always coming through but is not always heard—not because it isn’t loud enough, but because some have still not learned how to shut up and listen.