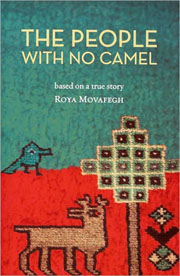 This is not your grandmother’s memoir—it’s your contemporary’s, and it’s cloaked in fiction and fable. Author Roya Movafegh does not claim The People with No Camel as nonfiction, but it appears to be much more than simply “based on a true story.” As with her narrator, Movafegh was born in Austria, moved with her family to her parents’ native Iran in 1976, and left again a mere five years later due to religious persecution. Both the real and the fictional families are Bahá’í, a people who have long been discriminated against in Iran and who faced government-sponsored persecution and execution after the Islamic Revolution. This novel is the story of a young family—two parents and their five- and ten-year-old children—risking their lives to flee their country and seek asylum elsewhere.

Movafegh’s writing largely works to demonstrate how a child’s experiences are recounted by that exact person grown into an adult. Some of the most purely childlike views come in the description of the young narrator’s observations. Kids intensely observe their peers, as does this narrator: “The same children whose excited cries had carried us into their village reappeared and ran alongside us again in the dusty roads. I watched; they ran, shouted, and waved.” Most readers will relate to the sinking confusion and embarrassment that the narrator feels in the passage below:

I thought nothing of my endless drawings of men tied to posts, crying as bullets exploded out of firing squads. During one of my great-uncle’s visit[s] to my grandparents, I had proudly shown one of those drawings to him, awaiting praise and recognition for my skills and choice of colors.
“Look at what our children are drawing,” he said, his distaste undeniable.
I looked. What was wrong with what I’d drawn? I looked. Then I saw. Then wished that I hadn’t drawn it.

Sometimes the narrator seems oddly mature beyond her years: early on she explains “We were leaving behind good-byes unsaid, for we had only learned about our moment of escape the previous afternoon,” and recounts how an airport security guard “searched my body, much like one would search for valuables on a fresh corpse, and I in turn searched for a sign that would tell me that she had once been a girl like me.” Most ten year olds who are living among strife cannot imagine the concept of “good-byes unsaid” or the notion that a hardened adult had once been a child; this particular ten-year-old has seen ugliness, without doubt, but she hasn’t participated in it or processed it.

What serves The People with No Camel better is Movafegh’s anecdotes from the escape. There is the moment in the middle of the desert when the narrator not only sees but tastes her new surroundings: “Cloaked in desert colors, I peeked at my father. He no longer resembled himself. ‘You’re blonde,’ I informed him and immediately regretted allowing more graininess to enter my mouth”. The family’s guide along their escape route comes up with a strange and inspiring spontaneous solution to mislead guards at a checkpoint. And there are Hot Wheels, Snow White purses, Streisand, and humor: “Had it not been barren and gated, I would have liked to live in a no-man’s land”.

The distinctly second part of the book, its own standalone story, is where The People with No Camelseems to veer into complete fiction—the protagonist is now a grown woman and portrayed in third person, and she is running from a mystical creature who craves her ears, trying to save a forest of talking trees, and drinking magic potions. Her fantastical quest for freedom is as palpable as the real-world girl’s in the book’s first part, and it is also less so, because the setting is inherently alien. Indeed, stories that fall within the fantastical rubric— fables, magical realism, surrealism— have long been useful at conveying the strange horror and fortune of real-world wars and explorations and individual dramas.

While The People with No Camel succeeds in creating a hybrid text that offers a take on historical reality, it feels less successful than it could have been. Movafegh is a multimedia artist, and readers may wish that she’d pushed this story further, through the incorporation of visual art, technology, or maybe simply a more outrageous genre pairing. Still, it is a vivid reminder that children who live through totalitarian regimes can’t shake the echoes of their upbringing.