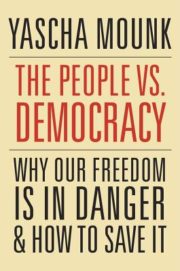 Why Our Freedom Is in Danger
and How to Save It
Yascha Mounk
Harvard University Press ($29.95)

“To save democracy,” Yascha Mounk writes, “we need . . . to unite citizens around a common conception of their nation; to give them real hope for their economic future; and to make them more resistant to the lies and the hate they encounter on social media each and every day.” This is less a prescription for a cure than a diagnosis of the problem. Anxiety about ethnic, racial, and religious pluralism; economic stagnation and inequality within the state; internet technology with and through extreme ideologies and outright lies—these are real crises, worldwide, and the promise of a solution offered in this book’s subtitle falls, at best, far short. We’re told that “politicians from both sides of the aisle [must] come together to address the trends that are driving citizens’ disenchantment with the status quo,” for instance, and both parents and schools need to focus on “imparting a sense of civic duty” to the young. But this really isn’t a book about saving democracy; rather, it’s a user-friendly autopsy of liberal democracy’s worldwide collapse.

“Until recently, most of us lived in ordinary times,” with “ordinary” meaning an epoch so dominated by liberal democracy that political scientists had declared history to be over. Liberal democracy—which Mounk, attentive to the popular audience for which he writes, spells out as “a political system that is both liberal and democratic—one that both protects individual rights and translates popular views into public policy”—had triumphed. “Liberalism and democracy,” the consensus ran, “make a cohesive whole. It is not just that we care both about the popular will and the rule of law, but about letting the people decide and protecting individual rights. It’s that each component of our political system seems necessary to protect the other.” Now liberal democracy is under threat, worldwide. A quick scan of the news offers a parade of horribles revealing just how extraordinary our times have become, yet the trend is not toward an abandonment of both principles but “two new regime forms: illiberal democracy and undemocratic liberalism.”

Regrettably, Mounk’s book may convince many readers to share in this disenchantment, both through what he says—all the ways in which democracy doesn’t work, and the ways in which so-called democracies aren’t very democratic—and what he doesn’t. For instance, Mounk locates Trump’s rise within a growing partisan divide in American politics, using Michael Ignatieff’s distinction between thinking of colleagues across the aisle as adversaries versus thinking of them as enemies. It is the latter, for instance, that leads to leaving a Supreme Court appointment vacant for the final months of a president’s term in office, or shutting down the government rather than reaching a budget compromise. Have things really gotten worse? “When Lyndon Baines Johnson was president,” Mounk informs us, “the minority party in the Senate used the filibuster 16 times. When Obama was president, by contrast, the minority party in the Senate used the filibuster 506 times.”

Such facts are given as historical background, but more attention could be paid to just how broken such a system seems to be. Mounk chastises the left for blaming corporations and lobbyists for using their money to take power away from the people, but the portrait he offers of actual elected politicians reveals them to be far from servants of the popular will. The GOP takes the hardest hits here, not in relation to willed gridlock so much as in regard to that party’s decades-long campaign “to disenfranchise minority voters by passing unnecessary ID laws or shutting down polling stations in heavily Democratic neighborhoods.” Never mind the electoral college and questions about which votes actually matter; Mounk’s accounting of scandalous (or do we just say “normal” these days) Republican machinations in reordering the North Carolina governor’s office so that the incoming, democratically-elected, Democratic governor would be stymied will make most readers think that democracy—liberal or not—is already dead in America.

Mounk, indeed, finds plenty of undemocratic liberalism already at play in the United States, where much policy-making is in the hands of the judiciary or bureaucratic agencies. “Far from making decisions about a few blockbuster cases, independent agencies are now responsible for the vast majority of laws, rules, and regulations. In 2007, for example, Congress enacted 138 public laws. In the same year, US federal agencies finalized 2,926 rules. And it is simply not clear that voters enjoy any real form of oversight over the rules by which they are bound.” While Mounk is a defender of the necessity of many such agencies, he nonetheless suggests it would be sensible “to search for reforms that would give legislatures more power to set the necessary rules and hold the bureaucratic agencies that enforce them accountable.” Never mind, I suppose, that legislatures seem pretty nonfunctional, petty, and vastly divorced from the voting populace by Mounk’s own account.

This is a thought-provoking but ultimately unsatisfying book. Yes, liberal democracy is under threat worldwide, but Mounk’s arguments make that system seem so tenuous—dependent, as he has it, on a sense of rising economic well-being, on ethnic homogeneity, and on a shared media with some degree of a fact-checking apparatus—that it’s hard to imagine it was ever such an exceptional system to begin with, and impossible to imagine it continuing to exist. Perhaps Mounk is working on a sequel, in which he’ll elaborate precisely how a renewed sense of civic identity can make liberal democracy great again. In the meantime, readers will likely be left with the ominous thought that undemocratic liberalism might be our last, best hope.