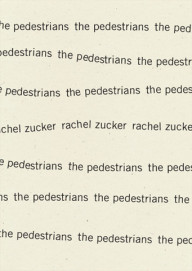 Rachel Zucker's ninth book of poetry, The Pedestrians, is really a double collection, as it’s divided into two sections: “Fables” and “The Pedestrians.” Both sections form a cohesive whole that resonates like a mother's cry against the hustle and bustle of the New York City skyline. “Fables” leaves the city and seeks solitude in nature, whereas “The Pedestrians” delves into the turbulent bowels of the metropolis. Zucker makes a distinction between nature and city, but throughout she blurs lines between the two, as well as between animal nature and humanity, solitude and chaotic motherhood: all blend into one female howl of day-to-day survival.

Written in third-person narrative prose, “Fables” moves like a lost tourist meditating on place and nature. Focusing on a tired mother and housewife, Zucker skillfully creates a character with an emotionally detached voice, echoing the woman's attempt to detach herself from motherly duties and city life. Hungry for affection and serenity, the woman goes on holiday with her family, but experiences nothing of the expected relief:

She lay next to the snoring husband in the sublet bed and . . . the bedroom smelled like smoke and the wooden floors of the bathroom smelled like her three sons' urine . . . she realized that this city, so unlike her city, was exactly like her city and that everyone in her city was exactly like everyone in this city and that they were all animals and that animals can only be animals.

She had a small copper wire inside her. . . . Without the chance of another child, sex lost some of its appeal, purposefulness, danger, pleasure . . .

"No," she thinks. Not anymore.

When the woman returns to her native city, which has transformed into an animal: "bridges curve like snakes," buses and trucks look like "chummy canines," buildings have bowels. The woman seems incapable of separating the blurred boundaries of nature and city life. Likewise, she can't ever really detach herself from her family, try as she might. “Fables” ends with this realization:

It's never safe to stay, she wanted to say. There is no such thing as leaving. . . .

There was no going away. Wherever she went they were with her.

In “The Pedestrians,” Zucker zooms in on the mother's busy life and creates poetic gems that echo her overwhelming day-to-day experience. The first-person narrative poems here create an intimacy with the speaker and her anxieties. In "mindful" we see Zucker's talent of connecting form with meaning; the poetic lines are mostly enjambed, which speeds up the tempo and creates a dizzying effect. Without a break between the lines, we feel out of breath, like the exhausted mother does:

The poem "pedestrian" verbalizes the mother's fear of losing her humanity in a city that is slowly transforming her into a surviving animal:

Poetry itself seems to be the mother's only comfort; she knows "reading and writing creates a private sphere /in a way that thinking can't." In "i'd like a little flashlight" she is able to express her deepest desires:

Zucker’s collection of poetry bears testimony to both her poetic brilliance and motherly ability to "juggle her family like eggs or oranges." Her hybrid style blends prose and verve into one urban stream, rendering her poems “worth their weight in ink” (as she puts in in “pedestrian”). Her words reverberate like the roar of an empowered lioness, as she emerges victoriously from the city jungle of her life, a mentor to all mothers.