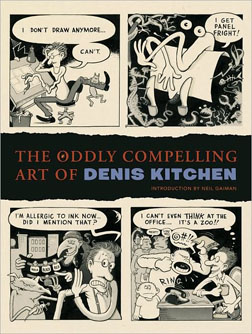 Although at first this book seems oddly titled, in the end one can rightly conclude that Denis Kitchen’s art is indeed “oddly compelling.” Perhaps that’s because Kitchen is better known as the publisher of the legendary Kitchen Sink Press, now defunct but one of the key players in the underground comics (or “comix”) movement of the 1960s and ’70s that inarguably contributed to the growth of the graphic storytelling medium. Perhaps it’s also because Kitchen’s style, like those of his great forbears such as R. Crumb, Will Eisner, Harvey Kurtzman and Gahan Wilson (to name a few), blends distinctive draughtsmanship with a surrealist mayhem that draws the reader’s gaze. At any rate, this celebration of an unsung artist tells more than one story, and they are all told superbly. Best of all, it does so largely without the hagiography that mars most books of this kind, preferring to offer hard evidence and let readers draw their own conclusions.

Charles Brownstein, Executive Director of the Comic Book Legal Defense Fund (an organization Kitchen founded), alludes to most facets of this prismatic story in the book’s overview essay, “Who Is Denis Kitchen? Snapshots from an Oddly Compelling Life.” Brownstein focuses on Kitchen’s biography, but does so with an easy grace and an expansive purview: the man can write. So in addition to the details of a cartoonist-turned-publisher’s life, we learn about the trajectories of an aesthetic, the pressures of an industry, and how the elusive vagaries of time and chance and personal challenges affect them all. Kitchen’s story (and Kitchen Sink’s story, complete with rise, fall, and a brief alliance with Marvel Comics) is thus also the story of a medium bursting at the seams with artistic territory to stake and something urgent to say.

Kitchen himself adds to this subtle multiple portrait with well-written captions to nearly 150 pages of art and photographs, filling in the backstory (personally, historically, aesthetically) behind his artistic output—comics, posters, album covers, ads, illustrations, and more. And the ubiquitous Neil Gaiman offers an affectionate introduction that not only sets the tone smartly (the job of any introduction) and acknowledges a truth that must be said somewhere in such a book (“The world of comics would have been infinitely poorer without Denis Kitchen . . .”), but also muses on “an alternate world” in which Kitchen remained (primarily) an artist rather than became (primarily) a publisher.

That musing, indeed, is the elephant in the room, and will permeate any reading of the book. Read against basic truths we don’t need Brownstein’s essay to tell us—it’s hard, painstaking work to edit, publish, and promote the work of others, and rarely does it leave time to pursue one’s own muse—the evident quality and breadth of Kitchen’s art suggests that he might have become as important an artist as the many great cartoonists whose work he shepherded into print and championed. Still, this isn’t to belittle the fact that Kitchen made a veritable art form out of comics publishing in a time and culture which needed people of vision to step up to the plate. As Brownstein puts it, “there was an inherent artistic impulse in the publishing he excelled at . . . All the care that he would have dedicated to projecting his own voice now conducted a choir comprised of much of the medium’s finest talent.”

It wouldn’t be right to let a review of The Oddly Compelling Art of Denis Kitchen out into the world without commenting on the exquisite design of the book, credited on the title page to one John Lind. Faced with the challenge of presenting reams of art and photography of varying source size, layout, level of completion, condition, age, color, and probably more, Lind has turned what could have been a soggy mess into a highly readable compendium, one worth prime placement on any coffee table or shelf; major accomplishments and interesting minutia are all given a fair chance to be “compelling,” and the well-balanced structure keeps the reader turning pages to see how the plot, so to speak, thickens. Even the bibliography and index are laid out nicely! Lind’s care reflects well on the book’s subject, both celebrating Kitchen’s artistry and making the case that the art form he pursued, publishing, is a complex one indeed.

Kitchen, it’s worth remarking, is still active in the world of comics—as a literary agent, a book packager, an historian, and probably in other behind-the-scenes ways this book isn’t coughing up. But one hopes he will live up to his closing comments in Brownstein’s overview: “Seeing this book come together makes me wish I had drawn more in the past. But there are no regrets. I’ll simply draw more in the future.”