The O mission Repo and Letters from Abu Ghraib, are worthy of attention not merely for their politically charged subject matter but also for the distinctive formal strategies that shape their content. These books defamiliarize the newspeak that has flattened our readings of 9/11 or the abuses at Abu Ghraib, bringing us into a new interpretive relationship with the recent history of the United States. 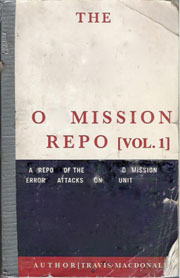 Travis Macdonald is the “author” of The O Mission Repo, an erasure project that works with The 9/11 Commission Report. Such texts can be awkward, critiques and deconstructions of the original that are not themselves particularly illuminating. Macdonald’s work here is a happy surprise, however; it burrows through the 9/11 report (itself heavily redacted prior to public release) to create an alternate text that is downright lyrical: “We / have searched / past / sight / and witness / for / This final / fraction of / light. / We emerge from this / or / into this / as / other.” The glibness that often emerges from erasure is absent here. Instead, this book enacts a repossession of U.S. history that is by turns playful, indignant, contemplative, and elegiac.

In the course of the book, the reader encounters new versions of all-too-familiar players. “United States” becomes an Orwellian entity known as “Unit.” Counterpoint to “Unit” is “Lad,” a recasting of Osama Bin Laden. Both are implicated in the belief that “war / desires death more than / Context.” Macdonald places himself in the midst of this cultural and political maelstrom as “author”—an inspired means of owning up to his role in revising the original document while also disrupting its authority. By systematically erasing “operations” into “opera,” Macdonald captures the fever pitch of U.S. emotions during and after 9/11, but he also forces the reader to reconceive of the ensuing crisis as something akin to aesthetic experience. Lest this seem a flippant way to address so grave a tragedy, let me emphasize that “author’s” art works within a world radically changed, and his aesthetic impulse is directed toward acknowledging this change and keeping his ear attuned to it, noting that all citizens are put in the position of eating “the / error of this / equivalent / art.”

The formal strategies and serendipities of the erasure process influence the book in felicitous ways. Punctuation is elided and syntax softens the ambiguities that political discourse typically effaces. These ambiguities provide “areas for / author to police / the torn / and limiting language.” Further, the design of the book, collaboratively done by Macdonald and JenMarie Davis, modifies the visual representation of erasure from section to section. Rarely has a book’s design so impacted the meaning of a text: the writing is variously blacked out, scored with lines, blurred, lifted onto open white space, and arranged as lyrics on musical notation. Each of these possibilities points toward another dimension of the work until Macdonald cajoles us out from “fear that / sour / asylum” to a reinvigorated site where the reader is “led / This language / from / Unit / to / You.” 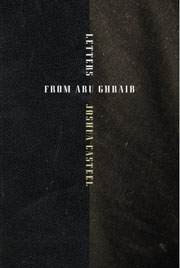 Joshua Casteel’s Letters from Abu Ghraib is a more formally direct text, but it remains of interest that Essay Press would choose to publish a book constituted of e-mails. Casteel’s prose, however, is quite literary, sometimes self-consciously so. Like Macdonald’s book,Letters from Abu Ghraib is a repossession of sorts, reshaping intimate correspondence as theological and political commentary. Casteel sent e-mails back to family and friends from Abu Ghraib where he served as an interrogator shortly after the torture scandal broke; in these missives, he struggles to bring his Christian faith into concert with his military service. The absence of other voices demonstrates the author as thrown back on his own resources in a site where authority is radically under question. In addition, this material takes on a peculiar allusiveness given that Casteel is a serious biblical scholar; references to scripture help bolster and affirm Casteel’s moral architecture as other institutional structures crumble (sometimes literally) around him.

In the beginning, Casteel comes across as exceedingly earnest, a young man who cultivates virtue, and yet whose assumptions have not yet been tried. This impression is uncomfortably underscored by Christopher Merrill’s introduction, which spuriously compares Casteel to Martin Luther King, Jr. and Dietrich Bonhoeffer, saying, “visions articulated from behind bars may have lasting power.” Casteel, however, served as interrogator, not captive. Later, Casteel’s drive toward goodness can appear arrogant, as when he writes, “I see my job much more as a Father Confessor than an interrogator. . . . A Confessor’s aim is to help the one confessing to be sincere, to arrive at the kind of contrition that actually desires self-disclosure.” Note the capitalized C in “Confessor”!

Casteel’s initial supposition of moral clarity leads to some unsettling moments for the reader, and some of his e-mails sound embarrassingly like sermons. Fortunately, the e-mails become more unsettled as Casteel grows increasingly alarmed about what he and his country are doing. Here is the core of the book, and it’s fraught with powerful drama and tension: to have dared to publish so overt a moral dilemma was a courageous thing to do. Thrown back on the ambiguities of his situation, Casteel discusses the centrality of conversion for Christians and undergoes a conversion of sorts himself. The self-satisfaction of the earlier e-mails is scoured away by his admission that “Maybe my anger is blinding my arrogance.”

As he works through conflict, Casteel gains moral clarity. His writing becomes more direct and more emotionally honest. Casteel writes perceptively to his parents: “I do not understand why [you] cannot apply your marriage/family counseling wisdom to cultures and societies. . . . why is it you cannot see these dynamics between nations?” Reflecting on the disproportionate force used by the U.S. military against a feeble and disorganized “enemy,” Casteel writes, “War is supposed to be the threat of being easily annihilated, not the threat of annihilating with ease.”

The author’s reflections ultimately lead him to file for conscientious objector status. If it feels a little anti-climactic that his superiors readily assent to this decision, perhaps it is a positive thing that Casteel’s superiors were able to enter into dialogue with him, that military culture is less monolithic in its allegiances then outsiders expect it to be. In this way, Letters from Abu Ghraib, like The O mission Repo, demonstrates that once the veneer of official policy is rubbed away, there is ample material to engage, animate, and trouble us.