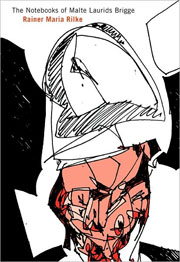 Which is the more accurate word for Rilke’s abiding subject, being or becoming? The word “being” recurs the most in English translations of his poetry. One such compendium is even called Possibility of Being(New Directions, 1977). Even his most astute English translator, J. B. Leishman, argues in his 1957 Hogarth Press edition of Rilke’s poems that the achievement of pure “being” was Rilke’s goal, formulated in a 1922 note from Muzot by the poet himself as “the experiencing of the completest possible intensity.”

Yet “being,” in English, seems a too static designation, leaving out his poetry’s constant openings, transformations, and gradations. Indeed, Leishman points out that Rilke was the first German poet to consistently deploy words which indicate ineffable measures of becoming: “fast (“almost”), allmählich(“gradually”), ein wenig (“a little”).” 1

In Burton Pike’s refreshing new translation of The Notebooks of Malte Laurids Brigge, the reader encounters precisely such an emergent Rilkean persona in full flowering, a figure so uneasy about being that he must write his way toward an ecstatic becoming, rejecting along the way each received formulation that fixes existence too simply: “One comes along,” his Malte warns us, “one finds a life all prepared, one only has to put it on.”

For some reason this otherwise excellent new edition neglects biographical context, providing scant detail about Rilke’s life before, during, or immediately after his only novel’s publication. Such background might have addressed the inevitable questions that longtime readers of the poetry might ask: What aesthetic problems in his poetry might have led Rilke to fiction? What relevance does this novel have to his earlier fables in Stories of God (1900) or his subsequent The Life of The Virgin Mary (1913)? Did the novel alter his poetics?

We know from other biographies that Rilke carefully avoided the “prepared” existence that his character Malte dreaded. In the company of Lou Andreas-Salomé, he traveled to Russia and met Tolstoy. Through his brief marriage to Clara Westoff, who was a student of Rodin’s, the young Rilke arrived in Paris in 1902 to write a monograph on the sculptor. They had one child named Ruth. He made a decent yet exhausting living for several years as Rodin’s secretary; he roamed widely around Europe; he read Nietzsche; he visited the Grand Palais in Paris and wrote copious letters about Cezanne’s paintings. In the winter of 1902-03, already a prolific poet, Rilke began the Notebooks during a stay in Rome and finished it in France seven years later.

Translator Burton Pike’s introduction does locate Rilke’s novel within the experimental ethos and cultural pressure of modernism, and his descriptive appendix goes much further than previous translators in tracking down the novel’s dizzying array of source materials. He also explains the idiosyncratic qualities of Rilke’s difficult German syntax. His translation favors loyalty to that often abrupt and clipped style of Rilke’s German, a welcome if sometimes disorienting choice for English readers, but a needed break from the sinuous opacity of M. D. Herter Norton’s version (Norton, 1949), and the often overly Anglo-friendly choices of Stephen Mitchell’s rendition (Vintage, 1985).

“The Sketchbooks,” Pike informs us, would be the literal translation of the Die Aufzeichnungen of the novel’s title. But Malte’s sketches are neither loosely arranged diaries nor a thinly veiled autobiographical performance by its author. Psychologically subtle and cohesive even in its associative, fragmenting technique, the novel’s dense prose is exhausting and exhilarating.

On the surface, Rilke’s Malte is uninteresting. The lonely scion of a diminished Danish aristocratic family, he is by turns passive, hyper-sensitive, and self-pitying. Compared to the neurotic heroes of early 20th-century Künstlerromans, Rilke’s anti-hero is rather boring, lacking the hedonistic proclivities of Proust’s Marcel, the amorous ambitions of Mann’s Hans Castorp, or the megalomania of Joyce’s Stephen Dedalus. Haunted by lost hierarchies and traditions, Malte resorts to wandering the dirty, congested French capital. Struggling with frail health, living in an apartment on “rue Toullier” near “Val-de-Grâce, Hôpital militaire,” Malte begins to write: the entirety of Notebooks unfolds as an intimate epic in two movements derived from a single entry dated “September 11.”

Through kaleidoscope-like passages—some recursive, others entirely discreet—Malte chronicles his interior states with as much scrupulous detail as he applies to his exposition of the physical world, attempting “to transform this capillary activity in a single stroke into the most convincing gestures, the most intensely present things.”

The novel’s most captivating passages are those that circumvent the reader’s tendency to distinguish prose poetry from novelistic exposition. Twenty-eight years old, Malte has strong lyrical gifts and prodigious novelistic élan. Recalling a beloved girlfriend from childhood, Malte describes her “smooth features in which comprehension renewed itself from time to time, as if she were constantly understanding something.” An emotionally frozen patriarch listens “attentively” to other people speak about his own daughters, “as if they lived in some other city.” As in Rilke’s poetry, the non-human world of objects like lace, toys, and walking canes are oracles. “Trees stood as if they didn’t know what to do in the fog,” and “the wind of the day had died down, the alleys were long and satisfied; where they ended houses shimmered, new as fresh fractures in some white metal.”

The novel dilates and detours in and through seemingly disconnected scenes. As if composing cycles for a fugue, Malte writes of memories and fictions, exteriors and interiors, luminous strangers and lost guardians, mirrored reflections and ghostly visitations, sudden music and sustained silences. He communes with Baudelaire’s poetry in the Bibliothèque Nationale. He reads the faces of pregnant women and the ill in the Hôtel Dieu as if they are harbingers of change within himself—which they are. He confesses cryptically that he yields to “the temptations” of Paris but offers no hints about his transgressions. As coming-of-age stories go, Rilke’s novel is often disappointingly chaste and ascetic. Malte, like his mother’s attending physician Dr. Jespersen, is employed mainly in “the soul department.”

Following along as painstakingly as Malte writes, the reader finds literary texts soon indistinguishable from lived lives, and religious visions from Malte’s Scandinavian childhood are rendered as lucidly as the anonymous comings and goings of his noisy neighbors in Paris. Yet the novel is less about the depiction of a self in society than the construction of a newer existence within the gesture of writing itself. The drama is inextricably textual. Momentum builds as Malte’s various conclusions accumulate force through his acceptance of the terrible paradox that we were born in order to die.

This surrender is most poignantly on display when Malte recalls and re-creates scenes from his troubled childhood and from his tireless readings. Describing how he witnessed the death of Count Brahe, he recalls how the nobleman “knew that he was now leaving everything, not just people. Another instant and everything will have lost its meaning, and this table, and the cup, and the chair he is gripping tightly, all the everyday and closest things, will have become incomprehensible, alien and heavy.” The recent execution of the Russian Czar is recast as a poeticized tale of lost omnipotence, poignant right up to its last gasp: “between voice and pistol shot, infinitely compressed, there was once more will and power in him to be everything.” Sentence after sentence, through minute observations of absence-as-presence and presence-as-absence, Malte actualizes a revitalized relation to those “closest things” of daily life, restoring them to an original perfecting strangeness, an aura which words and names, by their implicit denial of mystery, have stripped away.

Death, he learns, is only one facet of the ubiquitous unknown in which we confront our daily being. The immutability of things need not induce morbidity. Fearful and sometimes trembling, Malte recaptures the creative energy he thought he had lost: “For it [fear] is so totally incomprehensible, so completely against us, that our brain dissolves at the spot where we strain to think it. And yet I have for some time believed that it is our energy, all our energy, which is still too strong for us.” The incomprehensibility of death gradually and passionately carries over into his perceptions of all phenomena. By writing, he sees (and indeed, “learning to see” is the book’s dominant motif). Like the saint in the Bayeux Tapestry in front of which Malte practically comes to reside, the narrator sees beyond “the random fornication of distraction.” The novel casts a spell like “a peculiar, sentient, tingling quiet, as if a wound were healing.” This glacial transformation—from Malte as a narrator who resists the unknown to Malte as an evangelist for the centrality of the unknown—is the key point of the book.

Shaking off residual solipsistic tendencies, he learns how to distance himself from his own being and from God. Through a re-examination of the lives and stories of distinctive women—his mother, Gaspara Stampa, the Portuguese nun—he re-conceptualizes love as a form of harrowing grace. Not surprisingly, he lyrically charts these inner changes through recitations of medieval and courtly romances.

The second half of the novel develops this existential-mystical vision of love, distilled by a brilliant re-telling of the Parable of the Prodigal Son. In Malte’s version, the Biblical tale shows the return of a poetic wayfarer who recognizes in his homecoming that his resistance to love involved neither a claim to a fixed identity nor a firmer grasp at being. Rather, “his love scattered itself about him . . . he was like one who hears a glorious language and feverishly undertakes to write poetry in it. Still ahead was the consternation of discovering how difficult this language was.”

The “language” of such becoming marks The Notebooks as a rare form of secular scripture. It was Malte’s language, discovered at the end, that Rilke set about perfecting years later, voiced by that implied credo to endlessness in the Duino Elegies:

begin again and again
the praise you can never
fully express.2