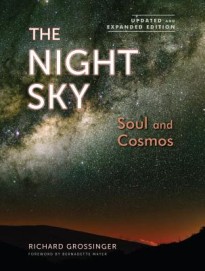 Back in the 1960s Richard Grossinger began editing and publishing the rather idiosyncratic literary journal IO. In its pages creative work appears alongside the scholarly and esoteric, reveling in a lively mixture of poetry and art with ecology and psychology, embedding matters of science within realms of spirituality. In the ’70s Grossinger’s own books began to appear with popular small presses such as Black Sparrow, and in 1974 he established North Atlantic Books, whose stated mission is "to affect planetary consciousness, nurture spiritual and ecological disciplines, disseminate ancient wisdom, and put forth ways to transmute cultural dissonance and violence into service." No North Atlantic title attempts to fulfill this mission as completely as Grossinger's newly updated and expanded edition of The Night Sky: Soul and Cosmos.

This ambitious, massive tome culls together three texts spanning decades, all focused on merging the science and history of astronomy with the cosmically attuned insights of astrology. Grossinger refuses to respect conventional boundaries between disciplines. He mixes diverse, even contradictory ideas and theories, liberally borrowing from wherever. His aim is nothing less than the presentation of a galactic and visionary path towards expanding human consciousness, acknowledging that "every creature is a matrix, formed by information as it gives off information: a cosmos thinking and breathing itself." Dismayed by how "we throw around cosmoses these days like so much Broadway stardust, digital apps, free-market capital," Grossinger urges that when you look up "what you see is what you have been and are becoming" and that "the unspoken reason we honor the starry night: it looks like us."

The Night Sky reawakens readers to the astonishment of earlier times, when the lack of electrical light did not allow for the eclipsing of night's starry drama. Back then, the intimacy of the connection between our lives and the enduring light surrounded by so much darkness above was felt as immediate and unquestionably relevant. Grossinger turns our gaze upward, however, to focus it inward:

The darkness of the night is our own darkness. Without darkness within, there would be no darkness without. . . . That is what we meditate on during zazen, what we reach out to in lonely prayer . . . There is only one darkness in the universe and only one source of light, only one night sky, and it is not out there.

Demonstrating the relationship between the stars and ourselves, Grossinger lays out the details of our own solar system. Every planet is profiled from both the astronomical as well as astrological angle, drawing on a wide range of writers to enhance his descriptions. For instance, on Neptune he turns to Gloucester poet-seer Gerrit Lansing:

"Normal perception is a jail," writes the poet Gerrit Lansing, "from which [Neptune] wishes to break out." He adds that the Neptunian dissolves to create. He is attracted to "the watery powers of the underworld," the "criminal, the forbidden, the untasted, always seeking to unveil, though not through the rational mind."

Grossinger knows those readers dedicated to "the rational mind" will likely be flummoxed by his freely citing creative and imaginative authors alongside those scientifically recognized, yet he’s unapologetically dedicated to getting his point across:

I will say this now categorically: scientists in general and astrophysicists in particular get trapped in a blatant external, inertial sky with its necessarily catastrophic Big Bang because they interpret the evidence, as well they should, on the basis of moleculo-atomic forensics and statistical testimony alone. However, it is possible to honor all that and still leave room for reality's self-arising ground luminosity: the superpositionally entangled, scalar basis of any system of emanation; the inviolable phenomenology generating a cyclone of gyres with an outer celestial husk; its shifting axis of verifiability over the aeons, from (as it were) star to shining star.

Scientific laws alone won’t do. Intuitive reasoning is called for. Popular demand for such explorative contemplation is readily apparent: "people pursue their daily horoscope (or get their futures told by soothsayers) because at some level they trust the intelligence of no-intelligence more than they do highly regarded intellectual theories of academic authorities."

Grossinger’s propositions admittedly stretch the limits of reason, especially when he retains traces of objectivity while insisting on a rather speculative argument:

I can accept that the crop circles are probably pranks . . . without ceding my larger belief that transpersonal and/or nonhuman intelligences are trying to contact us on unmonitored channels. . . . I can actually waver between paradigm-shifting anomalies and flagrant cons without feeling dilettantish because crop circles have become full-fledged hyperobjects that embody their own contradictions.

Despite the occasional somewhat hackneyed proposition, Grossinger's writing is well informed and his intent admirable. For a project so expansive in terms of scope and ambition, failure is rather impossible—with its bevy of citations, this is a book that simply goes on forever, and Grossinger likely already has notes for yet another "updated and expanded" edition.