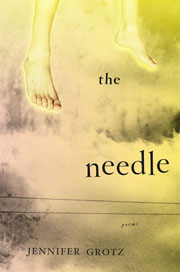 In Walt Whitman’s poem “A Noiseless Patient Spider,” the speaker talks about the titular arachnid who, “to explore the vacant, vast surrounding,” “launch’d forth filament, filament, filament out of itself; / Ever unreeling them—ever tirelessly speeding them.”

This is what Jennifer Grotz does in her second collection of poems,The Needle. She sends a filament toward the town square of Krakow, where she finds that “the city has its currency: every tessera is a coin // you must struggle to spend by looking.” She sends filaments toward other people, where she notes that “So stubbornly do we congregate that even in lightning and thunder / We sit strangely unalarmed, eating our chilling omelets” and that “In each of us a mad rabbit thrashes and a wolf pack howls.” She looks to her body, where she finds her family “in the blurring of feature and expression,” and peers inside her mind, where she finds the fear “that to be a Jennifer meant to chase endlessly after desire / or else try to live without it.” She sends filaments toward the literary canon, incorporating Hamlet’s infamous “nunn’ry” seamlessly into a cityscape where nuns ride on trams, and toward her own private grief, eulogizing her brother in the volume’s second section.

Many of the things Grotz’s filaments touch either disappear abruptly or rapidly transform. In “Alchemy,” “a pebble becomes a bright coin on the sidewalk” and “I become a bird squeezed in a boy’s dirty palms”; in “The Umbrella,” a rainstorm “poured until it wasn’t rain anymore”; in “Not Body,” the “you” becomes “a stubbornness.” “I imagine nothing I have ever encountered,” writes Grotz of the divine in “Medusa,” “but some slippery thing that flashes in the instant it is gone.”

Whitman’s spider spends his time “seeking the spheres, to connect them.” In The Needle, “memory meticulously stitches” together the various “slippery” things Grotz’s filaments reach. (Fittingly, that phrase “meticulously stitches” comes from the volume’s first and title poem.) As a result, a world is contained within the pages of The Needle: a world “not to be counted, but, like the bellies of stones, revealed.”

These central impulses of The Needle take on particular poignancy in its elegies. Grotz alludes to Blake’sSongs of Innocence and of Experience with great effect in the poems “He Who Made the Lamb Made Thee” (“you turned into something no one could tame”) and “The Fly” (“what’s neglected // interposes itself, like this portly buzzer . . . who makes a faith / from not knowing where to land”). In “The Eldest,” Grotz’s “spheres” join in a study of transience:

my mother would also die.
And so would my father. Which is why I wept:
I would be the last one.

With equal parts imagination and precision, all conveyed with syntactic simplicity and calm diction, The Needle rings profoundly true; one trusts and follows its poetic voice completely. Further, Grotz’s use of her own name combined with second person pronouns that feel personal rather than royal affords the reader a deep sense of intimacy. When Grotz uses the phrase “gentle reader” (as she does one single time), it does not come as a surprise or a contrivance; rather, it feels like a reminder of something we already knew that doesn’t require repeating.

In the final poem in The Needle, “Sunrise in Cassis,” the poet welcomes dawn and asks for the ability “not to elide this hour”: “the hour when the moon is a fishhook / steadily pulled up out of the liquid sky / into some drier realm,” the “beautiful hour / when the last few fishing boats / sneak out of harbor / to retrieve the nets that wait at the bottom of the sea.” Elide, which means both to omit and to merge, is a dazzling choice for The Needle’s final moments: reeling its last filaments in and still sopping from its journey, “Sunrise in Cassis” embodies the hour of which it speaks, both blending with and standing apart from the rest of the volume. It pulls The Needle to different ground, leaving us nostalgic and yearning to enter the volume’s world again.