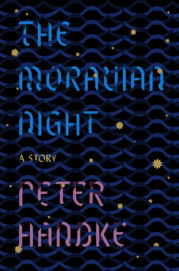 Reading a new novel by Peter Handke is like taking a month-long walk in the woods. You know it's going to be hard, you know long stretches are going to be dull, but you also know there will be some surprises along the way, and you have faith (based on prior experience) that when it's all over, you'll be able to put your feet up on the ottoman, pop open a beer, and say, "There's no other trail quite like that. I'm glad I took it."

The themes of The Moravian Night resemble those of Handke's earlier novels, though they're less emphatically addressed—uneasiness about Austria, questionable but essential Balkan roots, the need for solitude tussling with the need to be seen and recognized, and the desire for peace, both personal and global. As usual, a vaguely identified "woman" figures in the narrative, passionately desired at one moment and vilified the next, yet never clearly seen.

In the novel's opening pages, friends are gathering on a houseboat tethered in the reeds on the bank of the meandering Morava River in Serbia to listen to the nameless protagonist (identified in the text as "the former writer”) tell his tale. The thread of the narrative is a "tour" undertaken by the narrator to various places in Europe, a seemingly random itinerary that might or might not have a hidden logic. It includes a long journey by bus to a graveyard presumably desecrated during the Balkan wars, an anti-noise conference in Spain, and a cross-country hike along some abandoned rail lines on the outskirts of an unnamed Austrian city. One of the most absurdly amusing sections consists of a lengthy description of an international Jew’s harp convention that “the former writer” happened upon, seemingly by chance.

Yet in comparison to earlier works such as Repetition (1986) and Across (1983), not to mention the crisp, early novella Short Letter, Long Farewell (1972), Handke's prose has become more expansive and his narrative frame more complex, as if the act of writing had actually been supplanted by the less exacting (but perhaps more truthful?) act of story-telling. The narrator sometimes chooses a word, then thinks of a different one. He hesitates, qualifies, discards his previous remark, and the result is an equivocal impression. But at other times he lets loose with a long string of concrete descriptions, and readers who can appreciate these florid litanies of sensation are in for a treat.

Among the strangest and almost hallucinogenic of these passages occurs near the end of the book, when "the former writer" reaches the town where he was born . . . and doesn't recognize it:

Day had long since arrived, and a bat zigzagged across his field of vision, teasing him. Or had it been a swallow, announcing a thunderstorm by swooping close to the ground in the sudden burst of mugginess? No, the swallows were flying around as if nothing were wrong, very high in the air, while already it was thundering and lightning: the swallows were teasing him, too. A camel ambled past, belonging to a traveling circus? No. But probably the lion did, which he heard growl just once? Or had that been a person, behind one of the closed window shutters? A cat jumped up on him, and, believe it or not, the cat crowed. A viper whipped across the road, actually a dead branch. A brake squealed, and he leaped to one side, but it was his shoes squealing. Likewise the hail of stones that made him duck came from the stones he had collected during his journey, jostling one another in his coat pocket.

Handke recognizes how old-fashioned his attachment to the immediacy of experience is. Among the small group of friends listening on the boat, one is identified as "the interrogator" who frequently challenges the more fanciful details of his narrative, asking for clarification. But a less amiable challenge is presented by a character the narrator meets on the road, a journalist who, in the most obsequious way possible, represents everything that Handke hates. The two reconnect later and the journalist says:

Let it go, my friend. I know who you are. I write, too, not only newspaper articles but also books, even novels from time to time, à mes heures, as the French so beautifully put it. I’ve been following you and your literature for a long time. Your aesthetic literature, your aesthetic books have had their day. Poetic language is dead, it no longer exists, or only as imitation, as posturing. Didn’t you yourself proclaim that you weren’t worthy of your noble profession? So why would you reproach the rest of us for our lack of dignity? We've had enough of you writers and your dignity.

Peter Handke asks a lot of the reader in The Moravian Night. It's hard to imagine that anyone not already familiar with the author's themes—with his personal history—would get deeply engrossed in this latest offering. On the other hand, its poetic prose and its romantic (no other word suffices) approach to experience calls such vaunted figures as Cervantes and Sir Phillip Sidney to mind.

Near the end of the book, having returned to his home town and grappled with the issues presented by his stay-at-home brother and deceased mother, the narrator delivers a panegyric to the "karst country" of Central Europe, part political, part geological. It's reminiscent of Ford Madox Ford's Great Trade Route—a colossal fantasy rooted in values far deeper and more attractive than anything the politicians of our own day could comprehend. A troublesome misogyny can occasionally be felt beneath the imagery, but by the time we reach the houseboat to hear the former writer's strange, dreamlike tales, he and his female companion seem to have worked things out.