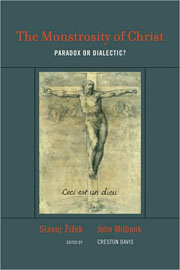 Long marginalized by secular modernity, religion has “returned with a vengeance,” editor Creston Davis declares in his introduction to The Monstrosity of Christ—a book clearly intended as a major contribution to this “religious turn” in contemporary philosophy. While important thinkers such as John Caputo, Luce Irigaray, Richard Kearney, and Jacques Derrida (particularly in his later work) have each sponsored this return of the theological, much attention has recently been paid to a trinity of superstar philosophers—Giorgio Agamben, Alain Badiou, and Slavoj Žižek —engaged in conversation around the possibilities that religious models present for politico-economic revolution.

In fact, Davis cites “the collapse of communism . . . and the subsequent global expansion of capitalism under the flag of the American Global Empire” as the key development accounting for the return of religion in philosophical discourse; theology may provide a means to “transcend” the “self-enclosed structure” of capitalism. Toward this end, the present volume pits Žižek , a militant pseudo-Marxist and Lacanian philosopher, against the Catholic “radical orthodoxy” theologian John Milbank; the two engage in a dialogue focused on developing a “materialist theology” that would “recover or reconnect transcendence with a militant materialism” in resistance to global capitalist nihilism.

This dialogue is really more of an “interaction of two monologues,” as Žižek puts it. The essays—two by Žižek , one by Milbank—are dense but frequently heady, though in Milbank’s case inclined toward ornately convoluted prose. The book is framed by the thinkers’ respective idiosyncratic readings of Hegel, and assumes a working understanding of psychoanalytic theory (especially its Lacanian formulations) as well as familiarity with the theology of Meister Eckhart (among others). Even intrepid philosophy and theology enthusiasts may therefore find this book as daunting as it is stimulating.

But Žižek is nothing if not stimulating. Perhaps today’s most rousing interpreter of Hegel, Žižek elaborates his conception of materialist theology (already adumbrated in his books The Puppet and the Dwarf and The Parallax View) through a version of Hegel meant to counter the “ridiculous image” of the German philosopher “as the absurd ‘Absolute Idealist’ who ‘pretended to know everything.’” Hegel’s formulation of the dialectical passage from abstract to concrete universality in the form of Christ is key to Žižek’s materialist theology. In a manner that contradicts the idea of an omnipotent, otherworldly God, Hegel provides the groundwork for a “Christian atheism” that recognizes that “what dies on the cross is not only the earthly-finite representative of God, but God himself, the very transcendent God of beyond.”

For Žižek as for Hegel, Christ’s incarnation—his fall into materiality—is the death of God: the becoming-flesh of the Word renounces the transcendence of God, even as the crucifixion announces God’s death. Thus, when the deific Christ, hanging from the cross, utters, “Father, why have you forsaken me,” this amounts to “the ultimate sin”; Christ wavers in his faith, denying God, thereby inscribing atheism into the very heart of Christianity.

This sin, according to Hegel, paradoxically reconciles God and human. But why does reconciliation have “to appear in a single individual, in the guise of an external, contingent, flesh-and-blood person”? It is with this question that Žižek turns to the “monstrosity” of Christ, so called by Hegel because of the sheer “inappropriateness” represented by God in fleshly form. Christ’s monstrosity consists in the fact that “the entire edifice of reality hinges on a contingent singularity through which alone it actualizes itself. . . . It is only in this monstrosity of Christ that human freedom is grounded.” The political import of this freedom is linked to the emergence of the Holy Spirit as a community of believers, a matter Žižek develops further in his final essay.

Before that, however, Milbank replies to Žižek’s opening 100-page salvo. Readers will likely find Milbank’s response either laudably erudite and intricately argued or tiresomely pedantic and egregiously tortuous. Milbank possesses a deep knowledge of historical theology, and displays formidable philosophical chops in formulating his concept of “paradox” in critical divergence from Žižek’s Hegelian dialectics. While applauding Žižek’s “theological witness,” he rejects Žižek’s Christian atheism on several key points, seeking to “endorse a belief in a transcendent deity” as part of a “radically Catholic humanist” vision deriving from and committed to incarnational paradox.

This paradox, as Milbank admits, is a “misty conceit,” and his elaboration of it verges (aptly?) on mystifying: he wants to develop “not an impossible contradiction that must be overcome (dialectics) but rather an outright impossible coincidence of opposites that can (somehow, but we know not how) be persisted with.” Pursuing this paradoxicality requires Milbank to indulge in dizzying, almost perverse, intellectual contortions. Whether or not one finds Milbank’s argument persuasive will depend partly on one’s tolerance for persisting with his rhetorical opacity and one’s willingness to accept the “impossible” more on faith than by force of argument.

That said, Milbank’s argument proceeds through readings of Eckhart, Kierkegaard, Chesterton, and William Desmond, aiming to demonstrate that Žižek’s atheism promotes a disenchanted materialism, while his own Catholic theology, mediated through beauty, “achieves a materialism in a joyful, positive sense.” On a political level, recognition of a genuinely paradoxical theology, in which God is both transcendent and immanent, allows for a non-fetishistic version of love that avoids complicity with the “illusions of desire” that drive free-market capitalism.

Ultimately, the ethical and political stakes of Milbank’s theology have to do with promoting a love that expresses itself in “never being satisfied with existing practices of charity, and remaining constantly open to further helping those to whom one is close, and endlessly extending one’s own circle of proximity.” But it is the “personal” stakes that seem to drive this essay: in countering Hegelian dialectics and its “tediously mysterious abolition of mystery,” he seeks to install a “hyperorthodox” ontology in which “we have the fascinatingly mysterious exposition of mystery in all its simplicity.”

Žižek will have none of this, and he enjoys the third and final word in this volume. The tripartite structure of the book recalls the Hegelian dialectic, in which thesis and antithesis clash (and converge) in a “negation of negation”—the Aufhebung. In Hegelian spirit, then, Žižek begins with a cordial but resounding negation of Milbank’s negations, in which he affirms the “authentic spirituality” of Milbank while also emphasizing that his own brand of materialism does not disenchant the universe but in fact opens us up to the bizarre wonder of empirical reality—as demonstrated, for example, in the “breathtakingly surprising and paradoxical” findings of quantum physics.

Having refuted Milbank’s refutations, Žižek sets out to demonstrate that “in my atheism, I am more Christian than Milbank.” For Žižek, this means recovering the genuinely “subversive core” of Christianity by repeating the “traumatic” gesture introduced by radical theologians in the 1960s. In fact, Žižek in his recent work has provided a philosophical framework for Altizer’s death-of-God theology, itself informed by Hegelian dialectics. Altizer’s vision, he affirms, “retains a properly apocalyptic shattering power” in its conveyance of divine kenosis, or emptying. Žižek argues that this emptying entails a revision of Christian love, or Agape, understood here as liberation from the vicious cycle of law and sin, realized in the community of the Holy Spirit.

In Žižek’s hands, Agape is a strange force, lending support to a disturbing ethical vision. Those possessing the fortitude to read to the book’s end (or the willingness to skip to it) will thus be treated to a characteristically startling closing flourish from Žižek. Subverting postmodern difference, he propounds an ethics and politics of distance, impelled by “love on account of which . . . I am ready to kill my neighbor.” He refers here to a pair of amoral young twins depicted in Agota Kristof’s novel The Notebook. Exemplifying an “authentic ethical naivety” that is nonetheless compatible with reflexivity, the twins attempt to meet the demands of their neighbors, “no matter now weird.” (They are called upon to piss on the face of one, for example.) But this “cold serving of others extends to killing them when asked,” as when the twins’ grandmother requests they poison her milk.

While this ethic may be compatible with Žižek’s materialist theology, it is not clear that it follows necessarily upon it. Perhaps this is why Žižek concludes not with philosophical argumentation, but with a quasi-Lutheran proclamation: “This is where I stand—how I would love to be: an ethical monster without empathy, doing what is to be done in a weird coincidence of blind spontaneity and reflexive distance, helping others while avoiding their disgusting proximity. With more people like this, the world would be a pleasant place in which sentimentality would be replaced by a cold and cruel passion.” A monstrous spirit moves through Žižek —a spirit proffering at once a remedy and a poison.