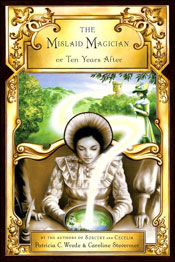 An epistolary novel, The Mislaid Magician is written as a series of letters between cousins Kate and Cecy, and between their husbands, Thomas and James. Intriguingly, the authors created the text—their third collaboration—by writing letters to each other in character. All three novels are set in a magical version of Regency-era England, and several characters from Sorcery and Cecelia (1988) and The Grand Tour (2004) make appearances in The Mislaid Magician—familiarity with the first two novels, however, isn't strictly necessary for enjoying the third.

The plot revolves around a conflict between ancient magics and newly built railroads: Cecy and James travel to investigate the trouble, while Kate and Thomas stay home to mind both sets of children, unaware that trouble will come to them instead. It is nice to see that Kate and Cecy continue to have adventures after settling into happy marriages. Samuel Richardson (one of Jane Austen's influences) set out two climactic possibilities for heroines in his own epistolary novels—marriage or death—and either way the story ends. This tradition is an old one, but not so with Cecy and Kate; happily, their story does not stop at the altar.

Wrede and Stevermer's use of the epistolary form is excellent. The characters cast secretive spells on their handwriting, spill blots of ink across the page, and send sudden warnings well in advance of their explanations (and it is genuinely unsettling to read “your children are safe” if you have no idea why they wouldn’t be). This immediacy makes up for the limitations of the letter-writing device, particularly the fact that characters only ever have the leisure to write letters about life-threatening events after the danger has already passed.

The novel’s flaws are political ones. (YA fantasy does, of course, participate in politics—read Philip Pullman’s His Dark Materials if you doubt this.) Cecy and James discover that an ancient spell is being tampered with, either accidentally (by passing trains) or deliberately (by sinister people)—or possibly both. It turns out that the spell binds England together as a nationalistic whole, and has done so for thousands of years, long before the concept of nationalism, or of England, existed. I can’t help but wonder what a Welsh or Scottish character would think of this magical theory of English unity, but no such character ever appears to voice an opinion. We do meet a pugnacious Irish magician, one who is instantly despised by the protagonists for his lack of London-based social graces, and who gets booted out of the story after his first scene. This is a shame; he could probably offer a worthwhile critique.

Any first-person storytelling is limited to the perspectives and assumptions of the narrating characters. Here the perspectives are consistent with both the novel’s historical period and its characters’ social station. Their snobbery is still distasteful, however, as servants are condescended to and foreigners dismissed. Wrede and Stevermer could clearly conjure up a whole chorus of voices and styles between them, so as enjoyable as the company of Cecy, Kate, and their husbands continues to be, the next book might benefit from the addition of contrasting personalities to the mix.