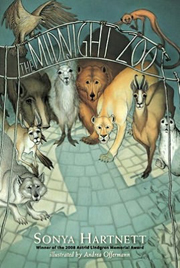 Sonya Hartnett’s stirring and unforgettable book, The Midnight Zoo, takes the reader out of the present moment and into the frightening, uncertain times of World War II. Two Romany brothers, Andrej (12) and Tomas (9), along with their infant sister, Wilma, flee a brutal attack by German soldiers on their camp. They lose their family and everything they know as they try to survive in a war-torn land, driven further and further away by ethnic hatred and indiscriminate bombing, living off of scavenged and stolen supplies as best they can. It’s a hopeless situation, so Hartnett introduces the magical improbability of an abandoned zoo, a safe haven of sorts, which the children literally stumble into one moonlit night. Any initial fear is overcome by intense curiosity as they discover that the animals cannot harm them; in fact they are trapped, starving and abandoned to their fate, much like the children themselves. As bombs hurtle to the ground, and the moon steadily moves across the sky, reality shifts to something more profound, something ineffable. We enter into another possible world.

The children awaken to voices not their own. The animals begin to speak to them, and in speaking with the caged beasts, the boys take part in a symposium of sorts, discussing the nonsensical aspects of the world in which they live. The animal fable is a tried and true way to hash out the complexities of human behavior, especially the baffling cruelties of war, what one person can do to another. Children and animals are often the victims of brutality that goes beyond their understanding. By telling their stories, they attempt to transcend the horror, and discover some kind of truth. As Tomas relates, “They called us crows. . . . They laughed at our caravans and our statue. They yelled at us. But we weren’t doing anything to them. They killed my uncle without speaking one word to him. But he was a good man.” The llama responds, “It’s no use trying to make sense of what people do.” The wolf concludes, “I’ve told you the reason for everything that happens. Somebody decides that they will have their way.”

Hartnett creates a complex story that doesn’t pull any punches. There are hard truths here, truths that find expression in the wondering voices of children who are faced with very adult problems, as well as in the voices of beasts who want to be free of their cages and return to their natural states. All of them hunger to be free of their situations.

But there are many kinds of hungers. The eagle, the bear, the monkey, and the seal; the wolf, the chamois, the llama, and the kangaroo; the lioness and Andrej, and Tomas and Wilma, and doubtlessly even the boar: all these had an echoing place inside them from which something vital was now missing. Andrej remembered the boy he’d been such a short time ago—a boy who had trusted that the world was strict but fair. Since then he had seen this faith upended and made laughable. . . . This wasn’t a world that made sense to Andrej: it was a hard wintry shell of a world, bare of compassion.

How do we stop the perpetuation of war and cruelty? What will it take to turn away from revenge, fear, and destruction? Sophia Hartnett’s The Midnight Zoo takes us out of our cages and gets the conversation going.