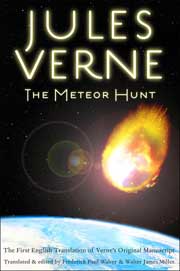 Mostly known for movie adaptations and a few books widely read by adventure fans, Jules Verne (1828-1905) has in recent years gained renewed attention for his prolific body of work. Verne, arguably the most successful French writer in the English language, is no longer remembered simply as the author of a few very famous science fiction books (20,000 Leagues Under the Sea, Journey to the Center of the Earth, and Around the World in Eighty Days). He was also a poet, playwright, and arguably the founder of science fiction—writing such speculative novels before the moniker was coined.

This recently published edition of The Meteor Hunt ably shows why Verne is still admired by readers today. According to the translators in their foreword, we have largely been reading "frauds" and "criminally slapdash versions" of Verne's novels, many drastically altered by his son Michel—this very book, in fact, was previously released as The Chase of the Golden Meteor and reissued by the same publisher not long ago. But this more accurate text of The Meteor Hunt, along with Paris in the Twentieth Century and a few other titles, breaks the mold of what we are accustomed to expect from Verne: an un-crowded extraordinary voyage without a lot of romance. In contrast to the dense social novels of the same period, Verne's works focus on the intellectual challenges of scientific enterprise, presenting new inventions, explanations, and possibilities—and as is well-known, many of the technological predictions and issues he wrote about have since become real. There are no new technologies or modes of transportation in this book, but Verne does correctly predict here that we may someday be in danger from a meteor that is on a collision course with Earth.

Despite being book-ended by rigorous literary scholarship—in addition to the polemical foreword there are notes, an afterword, and an annotated bibliography—The Meteor Hunt is a charming novel, and the translators have gone to great lengths to keep it authentic and fun. The story revolves around a solid gold meteor on a collision course with Earth, which is causing a great deal of anticipation and consternation. Here we find well-rounded female characters, often missing in Verne's other famous works; we also find wry commentary on the economy (the golden meteor will flood the gold market) and human ambition (astronomers vie to be recognized as the first to discover the meteor), yet the satirical sense of the novel does not interfere with the engaging scientific tale being told. In this winning edition, The Meteor Huntwill surely add to the Verne renaissance currently underway.