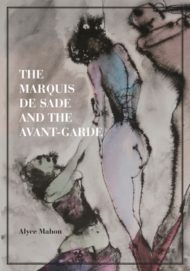 The Marquis de Sade is “one of history’s most reviled men, branded a pervert, a pornographer, a corruptor of virtue, and a madman,” as sex expert L.T. Woodward, M.D., puts it in his 1964 introduction to the first U.S. publication of Sade’s 1791 novel Justine, or The Misfortunes of Virtue. In truth, Woodward is the pseudonym used by prize-winning science fiction writer Robert Silverberg, who is not an M.D. but has written extensively on sex. Woodward/Silverberg goes on, with serious implications, to suggest that Justine “becomes part of the reader’s experience . . . once he has read it he has a keener understanding of the forces of terror that exist in the world.”

More than 50 years later, Alyce Mahon has created The Marquis de Sade and the Avant-Garde, a book that is a treasure house of information and inspiration, at the same time scholarly and completely engaging. In discussing Sade, Mahon reminds us of the importance of sexual freedom, of the long battle for openness concerning sexuality, and of the relationship of sexuality to interpersonal problems, personal consciousness, and political power. This is writing that reveals the hidden depths and concerns of human experience—what it means to be part of a social system with its privileges and prejudices. Sometimes called the “Gospel of Evil” by its detractors, the story of Sade’s writings also prompts modern readers to consider the importance and courage of independent publishers, reviewers, and bookstores at a time when they are facing an almost insurmountable struggle for survival.

Mahon, who has also written other excellent essays and books relating to the subject of sexuality (including the superb volume Surrealism and the Politics of Eros 1938-1968), gives us a short history of Sade’s life and relationship to women—one which was rather typical of the time, though some say he was given to excess. Charges were brought against him, and he was imprisoned by a letter de cache and kept in prison largely though the machinations of his father-in-law; the true reason is unclear. It is clear that he was quite anti-religious, a criminal stance at the time.

Regardless of why he was placed there, he became one of the world’s most famous prisoners. From his prison cell, Sade is said to have provoked the storming of the Bastille by tossing notes from his window demanding that the people rescue him. He even supposedly assembled a megaphone from a funnel and pipe and shouted out, “They are killing us!”

When liberated from prison, the Marquis de Sade reinvented himself as Citizen Sade and represented his district in the Assembly, where he opposed the death penalty during the terror. He was imprisoned again under Napoleon. During his more than twenty-eight-year imprisonment, sometimes in isolation and later in asylums with companions, he wrote thousands of pages, cataloging all he knew or could imagine about human sexuality as well as his critiques and philosophical insights. This perpetual prisoner’s writings are those of a free spirit and his philosophy that of pleasure—including, notably, equal pleasure for women.

Mahon writes not only about Sade but about the intellectuals who championed him. In 1909 Apollinaire, who invented the word Surrealism, wrote the introduction to the first Sade collection since the French Revolution, claiming the Sadean heroine as the “New Woman.” Reacting against the “Victorian homebody ideal,” these “new women” aspired to go out into the world, to make a difference. They demanded for themselves a public presence, even a vote!

André Breton, Robert Desnos, Maurice Heine, Gilbert Lely, and Georges Bataille were all part of the surrealist milieux in Paris. They realized the importance of Sade’s work and promoted it. A surrealist favorite is Sade’s A Dialogue between a Priest and a Dying Man. In his 1927 novel Le liberte ou l’amour!, Desnos called on the ideas of Sade and discussed French revolutionary Theroigne de Mericourt as one of the “first Amazons of Liberty.” Surrealists Bunuel and Dali produced a film based on Sade’s 120 Days of Sodom, L’Age d’Or, in 1930. It was attacked by the right-wing Ligue des Patriots who smashed the screen and assaulted movie goers.

Justine, or the Misfortunes of Virtue, written in 1787 and published in 1791, is the story of a naive and innocent young woman who is forced out into the world. A savage denunciation of religion that attacks Rousseau’s idea of man’s innate goodness, this satirical work could be considered a female version of Voltaire’s Candide, itself a wonderfully savage attack of the philosophy of optimism promoted by Leibnitz. Candide had been published in 1759, and was familiar to Sade. Mahon explains that Justine “allows Sade to present a universe in which the death of God is reinforced by the cruel torture of those who call on him.” With insight, she goes on to state, “Sade not only staged a subversive assault on the eighteenth century’s long obsession with virtue and vice and its attendant gender norms: he offered a radically alternative role for woman as a harbinger of change.”

Indeed, Sade was one of the few male advocates for the rights of women at the time, but plenty of women were speaking for themselves nonetheless, and Mahon’s book excellently represents women writers and the women’s point of view. In 1791 Olympe de Gouze, in her “Declaration des droits de la femme et de la citoyenne,” argued for a “national assembly of women” and free education for all, noting that if women have the right to be executed, they should also have the right to give a public speech. Following developments in the French Revolution, Mary Wollstonecraft published her Vindication of the Rights of Women in 1792.

Women intellectuals’ works Mahon discusses also include Simone de Beauvoir’s “Must We Burn Sade”; Dominique Aury’s The Story of O; Anne LeBrun’s Sade Collection; and Angela Carter’s Sadean Woman. Not covered in Mahon’s book but worth mentioning are U.S. writers Rikki Ducornet, especially her novel The Fan-Makers Inquisition; Nancy Joyce Peters, the City Lights mainstay whose writings on surrealism and women are included in Ron Sakolsky’s Surrealist Subversions and my own book Surrealist Women: An International Anthology; and Diane di Prima and Jayne Cortez, whose poetry was important in the development of surrealist ideas and passions.

An important chapter in Mahon’s book discusses the publication history of Sade’s works. What was publishable in 1791, and somewhat publishable by subscription in 1909, was forbidden in France and the United States in 1945 by censorship laws. Sade’s books, and any other literature dealing boldly with sexuality, could only be published in English in France, and even then only by small presses in small editions or by subscription.

As thoughtful persons and intellectuals of the postwar period puzzled over how the atrocities of World War II could have occurred in a so-called civilized place like Europe, the first post-war publication dealing with Sade was Pierre Klossowski’s Sade My Neighbor in 1947. This same year also saw the first publication of the complete Sade by J. J. Pauvert, until a 1956 trial and ruling seized all copies and closed the publisher, forcing Breton, Bataille, Paulhan, and Cocteau into the political fight against censorship.

In 1959 the Surrealists, following up on their opinion of Sade censorship, mounted a daring and scandalous EROS Exhibition. As part of this exhibition Jean Benoît enacted a performance piece called the “Execution of the Testament of the Marquis de Sade,” in which he fell into a kind of trance and got out a red hot iron to brand himself with the letters S-A-D-E. In 1976, eleven “domains” were created for the World Surrealist Exhibition in Chicago, one of which was devoted to the heroine of Sade’s novel Juliette, elaborated by Jean-Jacques Jack Dauben and Jocelyn Koslofsky. They were inspired by a this passage from the novel: “There is no power divine or human which dares oppose my desires, the past encourages me, the present electrifies me, and I have no fear of the future. . . . nature only created man to conceive as much pleasure and enjoyment as the earth can offer.”

It is important to note how often women, as publishers, editors, and even printers, were involved in the publication and distribution of controversial literature of a sexual nature. Among these were the American-born Caresse Crosby, who with her husband Harry established Black Sun Press in Paris in 1927, and the British writer Nancy Cunard, who established Hours Press in France a year later and published avant-garde literature by Beckett, Pound, and Henry Crowder, a Jazz musician from New York. Cunard edited, among other things, an anthology entitled Negro, comprising essays, pictures, commentary, and other expressions of the beauty, creativity, and contributions of Africans and African Americans. She struggled to find a publisher due to both racism and sexism; Negro finally reached publication in 1934, and has since been recognized as a rare literary achievement.

In the United States it was not until 1964 that a Civil Rights attorney living in Chicago, Elmer Gertz, took the case of Henry Miller’s Tropic of Cancer all the way to the U.S. Supreme Court and literary censorship laws were overturned. But the long history of Sade’s publication and suppression begs many questions: Why does society place such rigid control over sexuality and so little control over violence, killing, and war? Why is it considered so awful to watch the interesting and hauntingly beautiful configurations of sex when watching gruesome murders is ok? Why is the sexuality of women degraded while the sexuality of men is extolled?

The times we live in cannot be ignored: It is an era of easy access to viewing sex on the internet, graphic ultra-violence and murder everywhere, and political figures who redefine truth as whatever suits moneymaking. The question is, will the viewer/victims be able to sort it out? Will their confusion create a divisiveness leading to ever more violent confrontations? Will censorship be revived?

Mahon’s book suggests that it is desire—unfettered, sexual, and physical in its multiplicity of expressions and sublimations—that will lead us to find pleasure and peace, to realize the marvelous freedom of our dreams. If you are interested in such possibilities, then The Marquis de Sade and the Avant-Garde is an important work to add to your bookshelf; it will fascinate you, it will inspire you, and it will delight you.